Burning solid waste is a common practice in rural Alaska and, when done properly, can be an effective solid waste management tool. Proper burning requires removing waste that is not burnable prior to burning, containing the waste and controlling the burn, and properly maintaining the equipment.

Advantages to burning solid waste include:

However, your community does not have to burn waste. A landfill can be well-managed without burning. Contact your ADEC rural landfill specialist to determine if burning is a good practice for your community.

Proper burning begins with separating out non-burnable waste and other wastes that may produce toxins. This will improve the temperature and completeness of the burn as energy is not being used to try and burn waste that will not burn. In addition, wastes that will produce chemicals or black smoke when they are burned should be separated out to provide a cleaner burn and protect the community air quality, i.e. heavy plastics, Styrofoam, tires, chemically treated wood, etc.

Getting the waste off the ground, containing it, and controlling the burn are essential to maximize the effectiveness and safety of the burn. This can be accomplished with a properly constructed and operated burn unit. A well-designed unit increases airflow to the burn, which increases the temperature of the fire and results in a more complete burn.

Improper burning can cause serious problems for your community. Most importantly, unattended open burning (burning on the ground) can cause wildfires. Open burning has caused several wildfires throughout the state. If a wildfire is caused by a fire escaping the landfill, the landfill owner may be liable to reimburse the costs of fighting that fire. These costs can be more than $1 million!

Poorly-managed burns leave unburned waste in the ash and they tend to smolder, which creates more smoke and air pollution. To avoid these problems, waste should not be burned directly on the ground, as it is neither contained nor controlled.

The amount of air pollution produced by burning waste depends on the characteristics of the waste that is burned, the temperature of the burn, and the completeness of the burn (i.e. how much of the waste is fully burned to ash). As a rule of thumb, visible smoke is an indicator of incomplete combustion. ADEC encourages rural landfills that burn solid waste to use good burn practices to reduce the amount of smoke, air pollution, and unburned waste.

Do Not Burn Waste on the Ground!

Open burning has caused several wildfires throughout the state. If a wildfire is caused by a fire escaping the landfill, the landfill owner may be liable to reimburse the costs of fighting that fire. These costs can be more than $1 million!

Burning solid waste in an incinerator with mechanically produced airflow is the method that is most protective of human health and the environment. Incinerators can reach temperatures in excess of 1,600 degrees Fahrenheit, which yields a more complete burn that can reduce waste volume by up to 95%. While incineration is the most effective means of burning solid waste, it is not cost-effective or practical for many rural communities. Incinerators are expensive and require their own housing structure, electricity, regular maintenance, and a significant amount of fuel to operate. 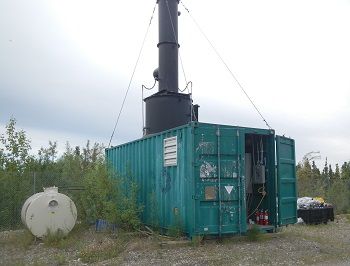 An enclosed burn unit is an effective way to maximize combustion without the need of electricity or an additional fuel source. The smoke stack and spark arrestor limit the potential wildfire risk by containing flying sparks and embers. The unit can be operated and cleaned out by a single person. As with all burn boxes it is very important to clean the ash out regularly to maximize air flow resulting in a hotter, more complete burn. 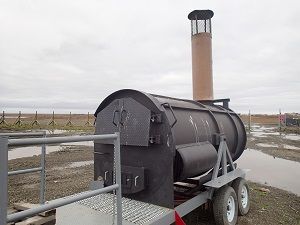 A burn cage is another common burn unit used in rural Alaska. These units can burn a large amount of waste and can be well suited for villages with larger populations. These types of burn units require heavy equipment to move them into position, to open the doors, and to empty the ash. These units do not burn as hot as manufactured, enclosed burn units and only provide limited control of flying embers to prevent wildfire risk.

A burn unit can be constructed out of local materials. Important design aspects that need to be considered are ease of emptying the ash and size of unit based on population served. All burn units should include spark arrestors, provide good air flow, and keep waste fully contained during the burn. Locally-constructed burn units are generally cheaper than commercially made units; however, they have a much lower life expectancy. 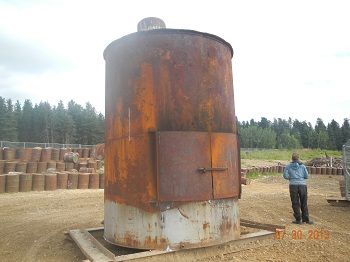 Keep waste covered and dry until it is ready to be burned. Moisture slows down the burning process and, because typical household garbage already contains 20%-30% moisture, any moisture added to the waste by rain and snow will only decrease the efficiency of the burn.

Burn waste only when wind is blowing away from community and homes. Take into account wind direction and speed before lighting the burn. Burning only on days when weather conditions are favorable will help reduce the likelihood of community members coming into contact with harmful smoke from the landfill. Smoke contains dangerous particulate matter and toxins which can damage the respiratory system and may increase the risk of cancer.

Have fire suppression equipment and supplies readily available to extinguish any fire that escapes the burn unit.

Remove Styrofoam, plastics, tires, and liquids to the extent possible before lighting the burn. These items create black smoke which is harmful to humans and the environment.

Separate glass, metal, and other items that are not combustible to help increase the temperature of the fire and the completeness of the burn. 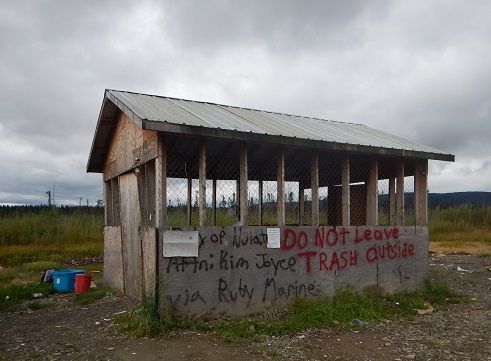 Do not allow the fire to smolder or to generate black smoke as both conditions are a violation of the ADEC Air Quality regulations. Review your landfill permit for burning stipulations specific to your landfill.

Make sure the fire is completely out and the ash has had time to cool off before removing it from the burn unit and putting it in the landfill. This will prevent unintended fires in the landfill.

Cover ash with gravel or soil between burns to reduce blowing ash.

Contact your ADEC rural landfill specialist with any questions on burning waste in your landfill.