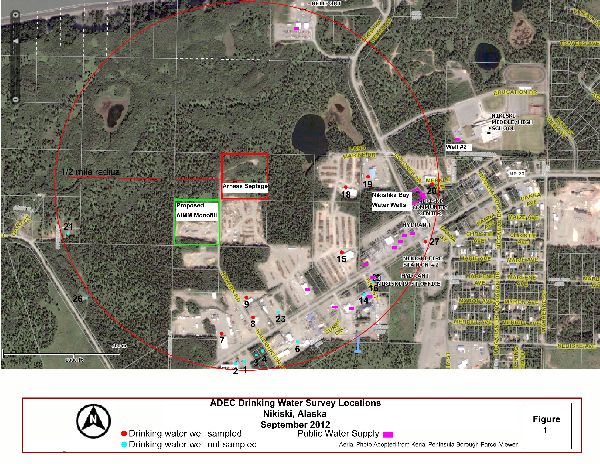 The area within the red circle on the photo is within a half mile of the Arness Septage property.

The eight red dots show the eight drinking water wells within the half-mile radius that were sampled. All eight wells are for small businesses.

The eight light blue dots show other wells within the half-mile radius that weren’t sampled. Half of those are private wells and half are wells for small businesses; they all declined sampling.

The rectangles represent businesses and residences that are all served by Nikishka Bay Utilities’ water system, a community water system, with the exception of the Nikiski Middle/Senior High School and the heliport. Those two have their own public water systems. Nikishka Bay also serves the neighborhood east of the red circle in the photo diagram.

DEC does not have well depths or drilling logs for most of the water wells that were sampled.

The Alaska Department of Environmental Conservation in August and September 2012 sampled eight drinking water wells belonging to eight small businesses within a half mile of the former Arness Septage disposal site in Nikiski. One of the eight wells showed detections of two chlorinated solvents. Three of the sample results from that well were below DEC’s groundwater cleanup level, but one was slightly above (see table, below) for TCE, or trichloroethylene, a solvent used for cleaning metal parts.

DEC, however, considers it unlikely that contamination originating from the Arness Septage site is impacting any of the wells that were sampled, based on water system sampling that has been done to date.

A second drinking water well out of the eight showed detections of Freon in two of the samples, but those detections are well below DEC’s groundwater cleanup level. No contaminants were found in the remaining six of the eight wells.

The 10-acre Arness Septage disposal site was used from the late 1970s to the mid-1980s to process waste, including septage (the partially treated waste from septic tanks), oily waste water and bilge waste.

DEC has asked the Arness property owner to do a groundwater elevation survey to establish the ground- water flow direction,and to install additional monitoring wells on the property.

The Arness family leased the property to an operator who ran the site as a septage disposal facility from May 1979 to May 1984. Bilge water, oily waste water and septage were processed at the site.

The operator and landowner burned the drum contents and took the crushed drums to the landfill.

In September 1988, the site assessment work included (1) installing a single groundwater monitoring well to a depth of 135 feet; (2) geophysical surveys (magnetometer and ground penetration radar) to detect buried metal objects; and (3) drilling and sampling four soil borings to a depth of 30 feet. In one soil boring (BH-4 in the blue diagram below), workers encountered visual hydrocarbon staining that prompted additional excavation. In the area near another soil boring, BH-3, the geophysical survey data also prompted additional cleanup excavation.

Soil samples taken during the excavation work showed detections of TCE, TCA (1,1,1-trichloroethane, which is used as a solvent, among other things), and PCE (tetrachloroethylene, also called PERC, a chemical used for metal degreasing and dry cleaning). 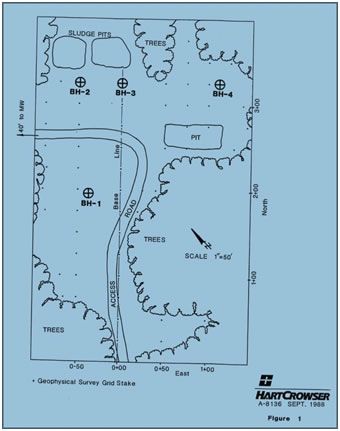 The layout of what the Arness Septage site looked like in 1988, along with the boring hole locations, is shown in this September 1988 drawing by a DEC contractor. (DEC file)

In 1989, DEC directed the landowner to remove contaminated soils in the area of the leach fields (also known as the East Pit), the leaking drum area (the West Pit) and a buried drum burn residue area (the North Ditch). The majority of the excavated contaminated soils and sludge from multiple septage disposal systems were ultimately landspread over roughly three acres of the 10-acre property. Landspreading (PDF) is a treatment for contaminated soil.

The U.S. Environmental Protection Agency’s Superfund Program evaluated the site and issued a “No Further Action” determination under that program in October 1990.

In 2006, the landowner began working with a local engineering firm to develop a plan for more cleanup work at the site. The plan, however, wasn’t implemented, and since then, no additional work has been done on the Arness Septage site.

Recently, an oilfield service company, AIMM Technologies Inc., applied for a permit from DEC’s Solid Waste Program to dispose of oilfield wastes in a proposed monofill on a 10-acre parcel adjoining and southwest of the Arness Septage site property. The location of the proposed monofill raised questions and concerns among the public about the potential impacts to the environment from the Arness property.

AIMM installed six groundwater monitoring wells to satisfy the requirements of the Solid Waste Program’s permit application. Four of the six were installed in October 2011; samples from those wells show no detection of chlorinated solvents or hydrocarbons. The other two wells were drilled in the last few months; those haven’t been sampled yet.

AIMM’s consultant and DEC believe that the groundwater flows southwest under the area of the proposed monofill. Based on that, the AIMM wells may be downgradient from the Arness Septage site, but that depends on the groundwater flow direction under the Arness property. And that can’t be determined until, as mentioned earlier, an elevation survey is completed, and an additional monitoring well or wells are installed on the Arness property.

A Summary of What’s Been Found

The eight drinking water wells that were sampled in August and September 2012 are shown by red dots in the diagram (see photo diagram, top).

TCE at a level slightly above the regulatory level of 0.005 parts per million was detected in one of two samples from well No. 20. TCE below the regulatory level and TCA below the regulatory level were also detected in well No. 20. That well is next to the Nikishka Bay Utilities water supply wells, which have been known to be contaminated with PCE and TCA since the late 1980s. The source of PCE is believed to originate from a dry cleaning facility that closed in the 1960s. (Nikishka’s water is treated with a carbon filtration unit that filters out chlorinated solvents – in this case, the PCE and TCA. The raw water and treated water are tested annually.)

Freon (Freon-11 or trichlorofluoromethane, a chemical refrigerant) was detected below the regulatory level in both samples from well No. 7. That well had nondetections, or NDs, for TCE and TCA.

The regulatory levels for contaminants are set out in the Alaska public drinking water standard (18 AAC 80) and Table C of the Alaska groundwater cleanup levels (18 AAC 75).

Please note that this site summary is subject to change. It will be updated as more results and/or information become available to DEC.