Alaska has millions of rivers, lakes, and streams that are incredibly important to the well-being of our state. The public has shown a high level of interest in the waters showcased here. The three state resource agencies: Alaska Department of Fish and Game, Department of Environmental Conservation, and Department of Natural Resources; also consider these waters to be of high priority because of their significant ecological and community value. These waters are currently receiving, or have received in the past, water quality assessments and evaluations of actions needed to protect or improve water quality. For more information, please use the specific links to each water. 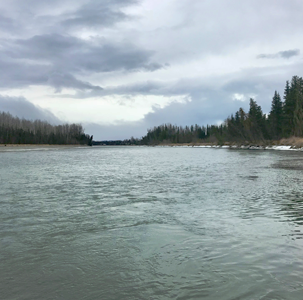 The Kenai River is a large proglacial river draining 2,200 square miles of the Kenai Mountains and Kenai Peninsula lowlands in Southcentral Alaska. The Kenai River is located approximately 150 miles south of Anchorage. It’s headwaters are the Kenai Lake in Cooper Landing and it has a course of 80 miles, emptying into Cook Inlet, near the town of Kenai. The river is accessible by the road system and is within a three and a half hour drive for more than half of the state’s population. Due to the accessibility of the popular fishery, the river receives some of the most concentrated motorized boat traffic in the state. The section of the river from Kenai Lake to where the Kenai River drains into Skilak Lake is known as the “Upper River”. The “Mid-River” section extends from Skilak lake downstream to Soldotna, at the Sterling Highway Bridge. The “Lower River” extends from the Sterling Highway bridge to the mouth of the river. The Kenai River is an anadromous river; the most popular sport fishing destination in Alaska, having runs of many species of fish, including king (Chinook) salmon, red (Sockeye) salmon, silver (Coho) salmon, pink salmon, as well as rainbow trout and Dolly Varden. The Kenai River drainage is also home to a variety of birds, moose, bears, and smaller mammals of the taiga.

The beach at the mouth of the Kenai River has been monitored for fecal coliform and enterococci bacteria since 2009 as part of the BEACH program. Sampling occurred in 2009 through 2016.

In 2015 the Kenai Watershed Forum published the Water Quality Assessment of the Kenai River Watershed from July 2000 to July 2014, presenting the findings from the compiled water quality sample analyses. The analysis is from water quality sampling by a partnership between the Kenai Watershed Forum, DEC, various other governmental agencies, and private industry, who collected and analyzed water samples from 13 locations along the Kenai River and from eight of its tributaries each spring and summer from 2000 to 2014.

Between 2009 and 2014 the Kenai River at the North and South Beach were monitored for fecal coliform and enterococci bacteria. Because the values detected were greater than the state water quality criteria, public advisories were issued. Appropriate precautions include avoiding drinking the water, showering or rinsing off after being in contact with the water, rinsing any seafood that is cleaned using beach water with fresh tap water, and cooking all seafood to a minimum internal temperature of 145 degrees Fahrenheit to destroy pathogens.

Between 2008-2010, turbidity samples were collected using data loggers at three locations in the lower Kenai River. The studies followed a report, 2008-2010 Turbidity Monitoring on the Lower Kenai River final.

Waters in the Spotlight 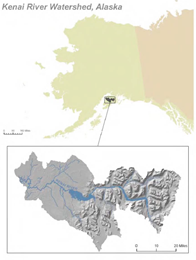