The earth's atmosphere is a complex mix of gases, vapors, and particles. Particles in the atmosphere are a mixture of solid and liquid molecules. They can be nuclei around which vapors condense, can stick together and form larger particles, and may react chemically with other substances in the atmosphere to form different compounds. If particles suspended in the air get large enough, they fall to the ground. Those particles that remain suspended in the air are referred to as particulates.

Particulates can be classified by their chemical attributes but are commonly classified by their physical attributes. Different sized particles behave differently in the atmosphere and have different human health and environmental effects. Therefore, scientists find it useful to classify particulates according to size. The size definition most useful is one that directly relates to how particulates behave in air and the two properties that most influence behavior are shape and density. 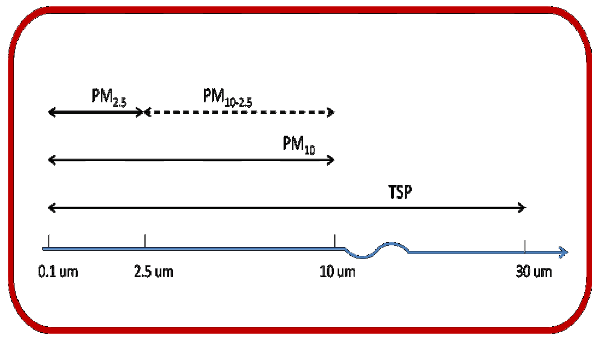 Particle size relates directly to its potential adverse health effects: the smaller the particle, the greater the potential. Particles having an aerodynamic diameter greater than 10μm primarily lodge in the oral and nasal passages. (The average human hair has a diameter of 60μm.) These particles are largely eliminated by natural body processes and do not penetrate farther into the respiratory tract. Fine particles, those 2.5μm or smaller, can travel deep into the respiratory tract and may lodge in the lungs. The elderly, children, and people with chronic lung disease, influenza, or asthma, are especially sensitive to the effects of particulate matter. Acidic particulates can also damage human‐made materials and is a major cause of reduced visibility in many parts of the U.S.

PM2.5 particles can lodge in the very small air sacs of the lungs, the alveoli. These particulates slow the transfer of oxygen and carbon dioxide and cause the heart to work harder to achieve the same rate of transfer. This effect is most noticeable in children and the elderly as well as people with respiratory diseases like bronchitis, asthma, emphysema, or heart problems. However, particulate inhalation can affect all people and adverse effects may only appear after repeated low concentration exposures or exposure to extremely high concentrations. PM2.5 generally comes from combustion processes like industrial stack emissions, motor vehicles, wood smoke from forest fires or home heating, and chemical processes that emit gases containing sulfur dioxide and other volatile organic compounds. PM2.5 can also form when pollutant gases combine in the atmosphere. PM2.5 particulates may contain carcinogens and other harmful substances.

Major concerns for human health from exposure to PM10 include effects on breathing and respiratory systems, damage to lung tissue, cancer, and premature death. PM10 often consists of common crustal materials such as dust from roads as well as volcanic ash. Natural sources include volcanoes (ash), glaciers (silt), unpaved roads and non‐vegetated land (windblown dust), and forest and grass fires (ash). These natural sources contribute both fine and coarse particles to ambient air. Anthropogenic sources include industrial processes, and mining.

When a person inhales lead‐containing particles, the lead distributes throughout their body and accumulates in the bones. Lead affects the oxygen‐carrying capacity of blood, can adversely affect kidney function, and the nervous, immune, reproductive, developmental, and cardiovascular systems. Infants and young children are especially sensitive to even low lead levels. Lead occurs naturally and in manufactured products. Historically, leaded fuels in motor vehicles and industrial sources have contributed the most to air‐borne lead levels.

Carbon monoxide is produced by incomplete combustion of carbon compounds, principally in internal combustion engines. Concentrations in the vicinity of heavily traveled highways are higher than ambient concentrations more than 100 meters from any highway. Carbon monoxide is not an irritant, and has little or no effect on plants or materials; however, it reacts in the bloodstream to deprive the heart and brain of oxygen. Moderate concentrations significantly reduce brain function and high concentrations can be lethal. Carbon monoxide is primarily measured continuously by infrared absorption photometry. Air is drawn through a sample cell where infrared light passes through it. CO molecules in the air absorb part of the infrared light, reducing the intensity of the light reaching a light sensor. That portion of the infrared light absorbed by CO is converted into an electrical signal reflecting the CO concentration, and recorded.

NO2 is formed from NO in the burning of coal, oil, gas, and gasoline, when combustion temperatures are extremely high. High concentrations of NO2 can impair dark adaptation, increase airway resistance and respiratory rate, and enhance susceptibility to respiratory infections. NO2 is measured using chemiluminescense. NO in the air reacts with the ozone to produce NO2, which releases light. The light is detected by a photomultiplier tube. An electrical signal reflects the NO concentration. NOx is measured by passing the air through a converter where any NO2 is converted to NO. By alternating the air directly to the reaction chamber, and through the converter before the reaction chamber, the analyzer reads NO and NOx. The NO2 concentration is the difference between NO and NOx.

Reactive nitrogen compounds (NOy) are precursors for both ozone and fine particulate (PM2.5). To measure NOy, sample air is passed through a probe‐mounted chemical reduction converter and the nitroxyl compounds present are reduced to NO. The sample is then blended with O3 in a reaction chamber causing a chemiluminescent response (emission of light) to occur. The reaction is monitored by an optically filtered high‐sensitivity photomultiplier giving an electronic signal output. This output is proportional to the concentration of NOy entering the converter.

Ozone forms by complex reactions among nitrogen oxides and certain organic compounds under the influence of ultraviolet radiation (e.g., sunlight). Ozone shows a very strong diurnal (daily) and seasonal (April to October) cyclical character. It injures vegetation, has adverse effects on materials (rubber and fabrics), and is a pulmonary irritant that affects the respiratory mucous membranes, lung tissues, and respiratory functions. Ozone is primarily measured by ultraviolet absorption photometry. Air is drawn continuously through a sample cell where narrow band ultraviolet light (254nm wavelength) passes through it. The proportion of light absorbed by ozone molecules in the air is converted into an electrical signal and recorded.

Mercury is a persistent bioaccumulative toxin. Mercury persists in the environment for long periods by cycling back and forth between the air and soil surface, all the while changing chemical forms. Mercury is never removed from the environment; it is just moved to other locations and eventually buried under soils and sediments. Mercury accumulates in biological tissue through complex reactions (bioaccumulation), many of which are still unknown. Mercury reaches the surface water primarily through atmospheric deposition, both wet and dry. Wet deposition is pollution, that has been washed out of the atmosphere by rain. Dry deposition is pollutants that are deposited to the ground, trees, etc. from the atmosphere. Estimates suggest mercury wet deposition accounts for 50% to 90% of the mercury load to most inland water bodies and estuaries in the U.S.

Neurotoxicity is the most important health concern with mercury. Methyl mercury easily reaches the bloodstream and is distributed to all tissues. It can cross the normally protective blood‐brain barrier and will also readily move through the placenta to developing fetuses, and so is of particular concern to pregnant women. Low‐level exposure is linked to learning disabilities in children, along with interference in reproduction of fish‐eating animals. Both methyl mercury and mercuric chloride are listed by EPA as possible human carcinogens. Mercury is analyzed using cold vapor atomic fluorescence.

Radiation contamination typically travels through the air in the form of particulates, although some contamination may be gaseous or become waterborne. By monitoring for airborne particulates, EPA's health physicists can estimate inhalation doses to humans. Measuring precipitation provides a good way to determine the amount of contamination which is stripped from the air by rain or snow and deposited on the ground. EPA uses the data to estimate ambient levels of radioactive pollutants in our environment, follow trends in environmental radioactivity levels, and measure widespread impacts from an incident that might occur anywhere in the U.S. or abroad. Radiation is measured by recording beta particle and gamma radiation activity on a filter that has collected particles from the air.