The geographic range of many tick species is changing due to changes in climate, how we use land, or due to movement of people and animals. Rapid ecological change in the state has raised the concern regarding the emergence of vector-borne diseases that could affect public and wildlife health. The Alaska Department of Environmental Conservation, the Alaska Department of Fish and Game (ADFG), and the University of Alaska-Anchorage Institute for Circumpolar Health Studies (ICHS) are working together to track ticks in the state through the Alaska Submit-A-Tick Program. The 2019 Alaska Submit-A-Tick Report summarizes the most recent information from these efforts.

While the risk of tick bites and acquiring a tick-borne disease in Alaska remains low, new tick species may be arriving and establishing in the state. Monitoring tick distributions through the Alaska Submit-A-Tick Program will likely be the most resource-effective method for collecting and disseminating up-to-date information to clinicians, veterinarians, and the public. Alaskans should become familiar with identifying ticks, and clinicians and veterinarians should review common tick-borne disease symptoms. Continue to take precautions to avoid tick bites when traveling to tick endemic areas outside of Alaska, and do tick checks on yourself and your pets before traveling back to Alaska. Biologists who spend time in the field in the summer should also check for ticks on themselves at the end of each field day, particularly if handling wildlife regularly. Please turn in all ticks to the Alaska Department of Environmental Conservation through the Alaska Submit-A-Tick Program.

In 2019, there were 232 records representing 522 individual ticks (Table 1)1. Non-native ticks (including Amblyomma americanum, Dermacentor andersoni, D. variabilis, Ixodes pacificus, I. ricinus, I. scapularis, I. texanus, and Rhipicephalus sanguineus) accounted for 15% (n=34) of the records. In the first year of the Alaska Submit-A-Tick Program, we received specimens of 13 tick species. The majority of tick records were submitted by the public (n=123, 53%) followed by biologists (n=68, 29%), and veterinarians (n=37, 16%). Human health professionals submitted 4 records (2%).

Table 1. Number of Ticks Recorded in Alaska in 2019

The total number of tick records collected each year has increased over the past 10 years, with the largest increases in the records of tick species that have historically been present in the state (Figure 1). Much of this increase is likely due to increased awareness of ticks and promotion of the Alaska Submit-A-Tick Program.

1These numbers include ticks submitted from both JBER and UAA tick drags and small mammal trapping. 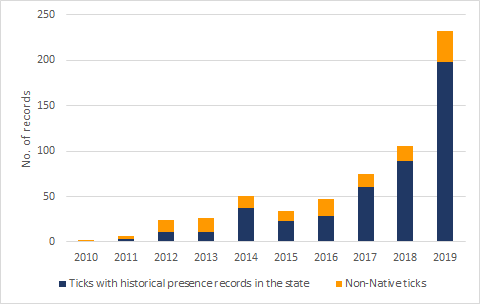 Over the past 10 years, the number of ticks submission from domestic animals and wildlife has increased the most substantially (Figure 2). 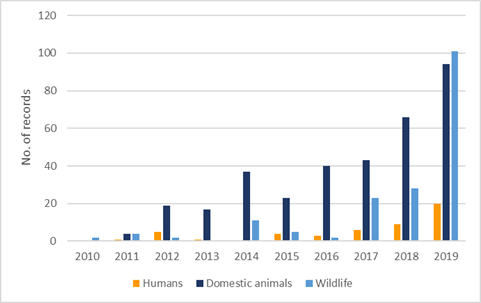 Seasonality and Travel History of Hosts for Submitted Ticks

Figure 3. Seasonality of Tick Submissions from People or Pets that had Recently Traveled Out of Alaska in a) 2019 and b) 2010-2019 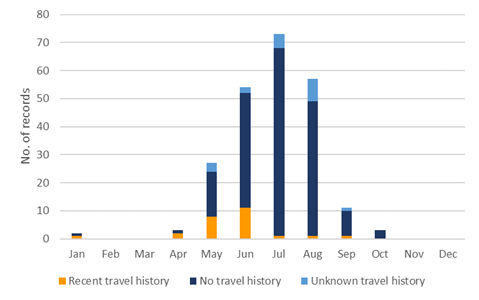 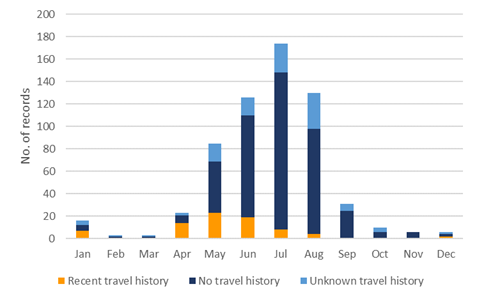 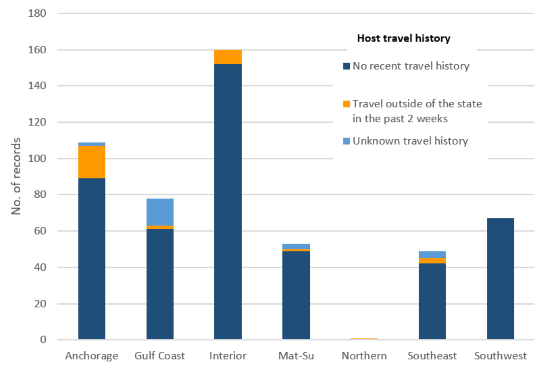 In order to be considered established and reproducing locally, two or more life stages or 6 individuals of a particular tick species need to be found in a borough in a single year from a host without travel history outside of the state in the prior two weeks. In 2019, 11 non-native ticks were submitted from hosts without recent travel history (Table 2). No tick species met the criteria for establishment in any borough.

Table 2. Number of Non-Native Ticks Submitted to the Alaska Submit-A-Tick Program in 2019 from Hosts That Had Not Traveled Out of State in the Prior Two Weeks by Borough and Life State (A=Adults, N=Nymphs, L=Larvae, Tot=Total Ticks)