For purposes of making recommendations on the EPA fuel rules, DEC identified areas of Alaska with year round and seasonal fuel distribution.

EPA proposed rules for fuel sulfur levels in rural Alaska on October 13, 2005. DEC recommendations were incorporated into the proposed ruling, including the request to accelerate marine sources to the 2010 deadline.

Unlike the non-road or on-highway rules, the NSPS does not switch all fuel for these engine types to low or ultra-low sulfur diesel. Only engines considered “new,” “reconstructed,” or “modified” have to use the lower sulfur fuel. "New" engines are newly manufactured engines. An engine is considered "reconstructed" when the cost of replacing worn engine parts equals 50% of the original engine costs. An engine is considered "modified" when any change to the engine causes an increase in air emissions. Given these three criteria, we estimate a full change-over to engines requiring ultra-low sulfur diesel will occur within 15 years.

This process is finished and a final recommendation is available, please see: DEC NSPS Recommendations (PDF)

DEC believes EPA's proposed nonroad rules are a solid solution to the problems of mobile source, and nonroad diesel emissions.

DEC recommended a one step transition to 15 ppm (ultra-low sulfur diesel) in summer 2010. This means diesel destined for on-highway mobile sources can remain unregulated until 2010. However, owners of trucks and buses with 2007 and later model year engines must use ultra-low sulfur diesel (ULSD). These users will have ULSD provided to them separate from the established fuel distribution system. In 2010, rural Alaska moves to ULSD for on-highway use with the rest of the nation. At that time, all mobile sources, regardless of model year, must use ULSD. Thus, this plan gives four years for communities to plan for the inevitable transition to ULSD, and four years for the cost per gallon to become more competitive with higher sulfur fuel costs.

The State of Alaska submitted a plan (Press release) to EPA that recommends conversion of "road system" Alaska in the same time frame as the rest of the United States.

For "rural" Alaska, the state had until June 2003 to review the federal rule's positive and negative effects on rural Alaska and Tribes. See DEC's May 2003 Recommendation for a Transition Plan to Ultra-low Sulfur Diesel (PDF).

View DEC's Final Recommendation (PDF) for a transition plan to ultra-low sulfur diesel in rural Alaska. This recommendation was submitted to EPA by June 13, 2003 as required. We will keep you up to date on EPA's rule making process from this webpage.

Summary Chart - the blocks with "HS" stand for "high sulfur." (Select the chart for a larger, color version) 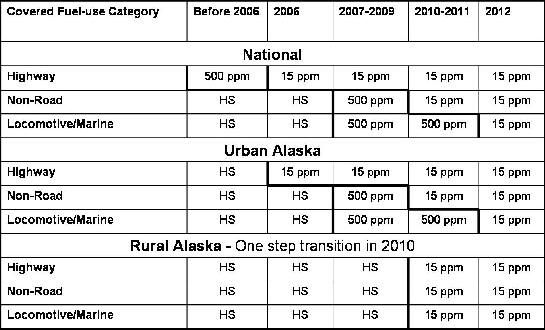 Thus, 2010 remains the bright line date at which conversion to ULSD must occur for all mobile, non-road and on-highway sources in Alaska. 2010 will also serve as the date where stationary sources will begin their transition to ULSD under the NSPS rules.