The former Adak Naval Air Facility occupies approximately 76,800 acres on Adak Island and is part of the Alaska Maritime National Wildlife Refuge. The southern half of Adak Island is also a federal wilderness area. Since the early 1940s, the northern half of Adak Island has been used for military operations. Army installations at Adak allowed U.S. forces to mount a successful offensive against the Japanese-held islands of Kiska and Attu. After the War, Adak was developed as a Naval air station, playing an important role during the Cold War as a submarine surveillance center.

In 1994 the base was added to the National Priority List of contaminated sites, under the terms of the federal Comprehensive Environmental Response, Compensation, and Liability Act (CERCLA). The air station's military mission ended on March 31, 1997, and the base was closed that year under the Base Realignment and Closure Act (BRAC).

An agreement signed by the Navy, U.S. Fish and Wildlife Service, and The Aleut Corporation in September 2000 allowed the United States, acting by and through the Department of Interior (DOI) and the Department of the Navy, to enter into a land exchange agreement with The Aleut Corporation (TAC), a Native Regional Corporation. This exchange took place in March 2004, transferring 47,271 acres of the northern portion of Adak , including the downtown area, housing units, and industrial facilities, to The Aleut Corporation. TAC exchanged surface and subsurface property from their Alaska Native Claims Settlement Act entitlement lands, mostly in the Shumagin Islands. Under the terms of the land transfer agreement, the Adak airfield was transferred to the Alaska Department of Transportation and Public Facilities for operation and maintenance. 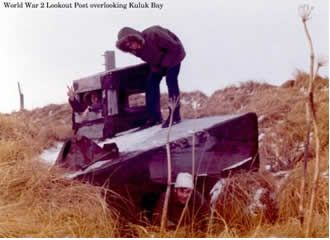 The Aleut Corporation plans to develop Adak into a community that includes a fish processing industry, fueling facility, and a hub for air cargo traffic. Population on the island ranges seasonally from 50 to 300 people, depending on the season.

Through military operations over the years, releases of hazardous chemicals occurred via spills and historical disposal practices. The Navy has identified numerous sites with contamination from past Air Facility activities. Since the military mission ended in March 1997, the Navy has been involved in the environmental restoration, cleanup and closure activities as the responsible party, following the federal CERCLA standards for protecting people, animals, and the environment. DEC oversees the cleanup to assure it meets the State of Alaska standards for protection of human health and the environment. The Environmental Protection Agency (EPA) also oversees the cleanup. The Navy, DEC and EPA seek community involvement via a Restoration Advisory Board, run by the Navy.

For technical and administrative purposes, Adak was divided into two operable units (OUs), A and B in 1998. Operable Unit A encompasses the entire military reservation with respect to chemical contamination, while OU B encompasses the entire military reservation with respect to ordnance contamination. Use of live ordnance on Adak was primarily limited to training ranges and their associated impact areas during the World War II era. Operable Unit B includes two subunits, B-1 and B-2. The sites in OU B-1 include the downtown and remote exchange areas identified for transfer. OU B-2 includes areas identified for retention by the U.S. Navy; these sites are the only non-transferable land exchange parcels concerning ordnance issues as of January 2003. All other ordnance sites (OU B-1 sites) as of that date have been investigated, cleaned up as needed, and found not to pose an unacceptable risk, making them transferable. 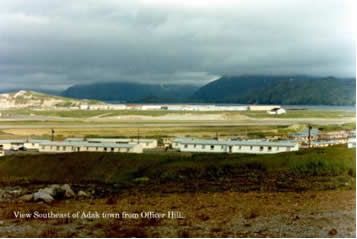 There were 181 sites listed or evaluated for chemical and/or petroleum contamination under Operable Unit A at Adak. Contaminants included petroleum, metals, pesticides, and volatile organic compounds. Contamination was identified in soil, surface water, sediment, and as free phase or dissolved contaminants in the groundwater. Fuel tanks and lines, drum disposal areas, spill sites, pits for waste oil disposal/firefighting training, and several landfills made up the majority of chemical and petroleum contaminant sources on the island.

Surface waters in the area are used for sport, subsistence, and commercial fishing. Investigations considered the possibility of personnel being exposed to contaminants through the skin or accidental ingestion of contaminated soil or water. Exposure was also considered through ingestion of fish or shellfish that may have been affected by the site. Threatened ecological resources included migratory birds, wetlands, spawning and feeding fish, and various marine mammals.

Over 200 potential UXO sites have been identified under Adak’s OU B. This contamination is primarily a result of World War II munitions storage, handling and training. Unexploded ordnance (UXO) represents safety as well as environmental risks when left in place, however, finding and removing it can be extremely difficult. Restrictions on access and future use of the land are commonly used to protect people and the environment from UXO.

Most sites with chemical contamination on the former installation have been investigated and remediation has been completed or is in progress at all but two sites. The Aleut Corporation has received the transfer of land comprising the downtown area, port facilities, utilities infrastructure and light industrial, administration, commercial, recreation and residential areas. The land transfer agreement defines the limits of future environmental liability, set by both DEC and the U.S. Environmental Protection Agency.

Institutional Controls are measures to prevent or limit exposure to hazardous substances left at a site and are an important part of the cleanup on Adak Island. Total cleanup of all hazardous substances is costly and at times impossible. Contamination left in place will slowly break down while access to it is prevented. Institutional controls on Adak Island include land use restrictions, fish advisories, excavation permits and reporting on maintaining land use controls. There are also engineering controls such as fences and signs in the Navy ordnance areas, landfill covers, and treatment and monitoring systems, including groundwater monitoring wells. Land use restrictions are used to ensure that land use assumptions utilized in establishing cleanup levels remain valid. An education program on Adak Island adds to the success of institutional controls by familiarizing residents and visitors about fish advisories, ordnance safety, and institutional controls.

Nearly all sites contaminated with ordnance have been investigated and remediation has been completed. One parcel remains under U.S. Navy control totaling 5,624 acres (Parcel 4, OU-B2) and is planned for final cleanup by 2021 and transfer in 2022 to U.S. Fish and Wildlife Service (USFWS). An Ordnance Education Program is in place to familiarize on-island residents and visitors about the need for ordnance awareness on Adak. It familiarizes personnel with the history of the presence of ordnance on the island, basic characteristics of unexploded ordnance (UXO) items, and procedures to follow if a suspected item is encountered. 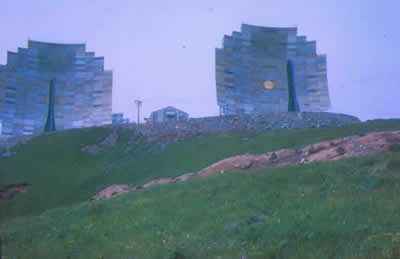 Adak was one of many remote sites in Alaska where dishes for communications were installed in the mid-1950's as part of the White Alice defense communications system. 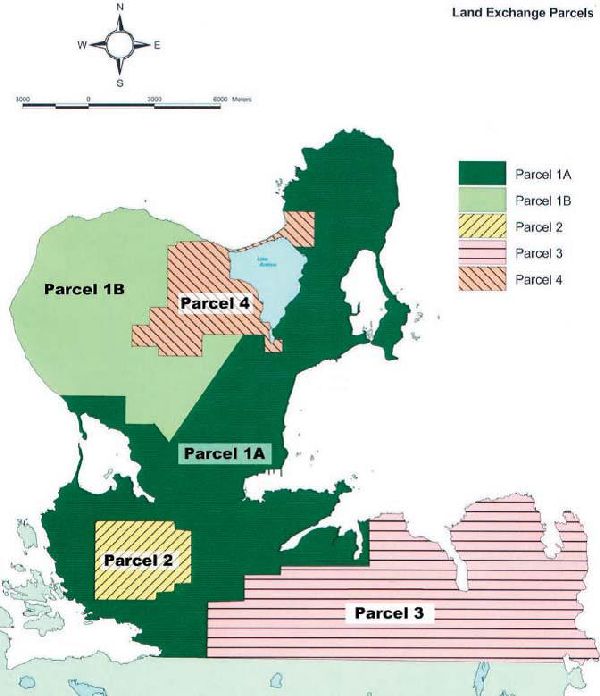 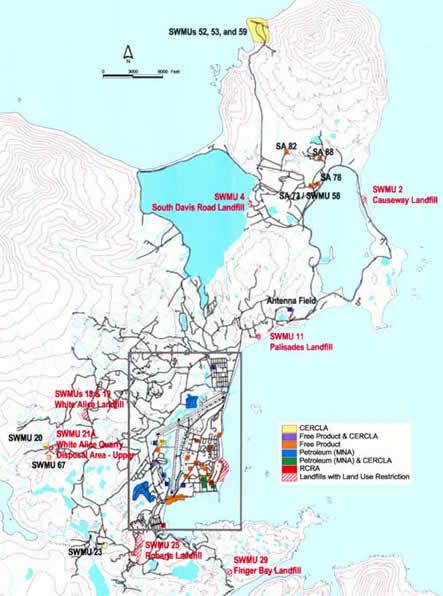 U.S. Navy map of major areas of contamination in and around Adak. (Courtesy: U.S. Navy)

1867: The United States acquired Alaska from Russia in 1867, since then Adak Island has been federal property.

1913: Adak Island was included in the 2.9-million-acre Aleutian Islands National Wildlife Refuge (renamed the Alaska Maritime National Wildlife Refuge in 1980) World War II - Aleuts in the island chain were evacuated to internment camps and future land use was restricted. Adak was used to launch offensive on the Japanese-occupied islands of Kiska and Attu.

1940: The island was added to the National Wildlife Refuge System.

1959: Navy presence at Adak was officially recognized by Public Land Order (PLO) No. 1949, dated August 19, 1959, which withdrew land on the northern half of the Island, comprising approximately 76,800 acres, for use by the Navy for military purposes.

1980: ll of Adak Island was included within the Alaska Maritime National Wildlife Refuge established by Congress in the Alaska National Interest Lands Conservation Act, and it remains part of that refuge today.

1992: In October 1992, the Naval Air Facility (NAF) Adak was proposed for addition to the National Priorities List of contaminated sites under CERCLA.

1995: Former NAF Adak was selected for closure in July 1995 under the Base Realignment and Closure (BRAC) process.

1997: The military mission of the former Navy base ended in March 1997.Since that time the Navy has been involved in the environmental restoration, cleanup and closure activities that will allow for lease and transfer of property on Adak to the USFW and non-federal entities.

2012: OU A Remedial Action Completion Report (RACR), the OU B-2 Remedial Investigation / Feasibility Study, an OU B-2 Action Memorandum, and an OU B-2 Proposed Plan were completed.

13-18: Non-Time Critical Removal Action (NTCRA) was initiated in Parcel 4 to address the remaining munitions impacts in OU B-2 and is expected to extend to 2021. 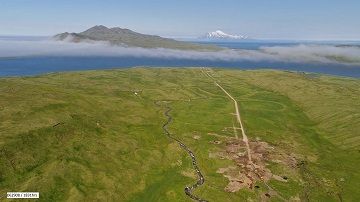