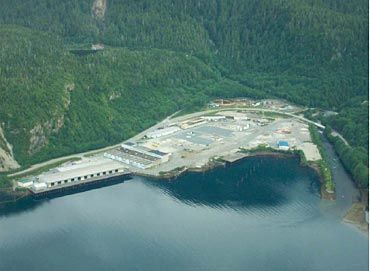 The former site of the Alaska Pulp Mill, Sitka, Alaska, as of 2004. Photo courtesy of the City and Borough of Sitka

In April of 1999 DEC determined which actions were needed to protect human health and the environment at the former Alaska Pulp Corporation mill site. These decisions were made after considering public comment, and issued in a Record of Decision (downloadable below). The remedy for the site included bioremediation (see glossary) of petroleum-contaminated soils, disposal of non-hazardous drain system sediments and ash containing dioxin at a permitted local solid waste disposal facility. Remedial actions also included land use restrictions, and ecological natural recovery of the Sawmill Cove sea floor community.

To be protective of human health, a deed restriction limited land use to commercial/industrial until it was demonstrated to DEC's satisfaction that other uses would not present an unacceptable risk. DEC also determined that a portion of the Sawmill Bay study area, in western Sawmill Cove, requires periodic monitoring and minimal disturbance of subsurface sediments. Because contaminants have remained on-site and in Sawmill Cove, an administrative review was conducted five years after commencement of remedial action.

DEC recently completed its evaluation of the deed restriction. In late 2004 the City and Borough of Sitka requested a change in land use to increase its development options for the site, now known as the Sawmill Cove Industrial Park. Specifically, a new tenant wished to construct housing for seasonal seafood industry workers. DEC has determined that the site can be safely occupied and used in an unrestricted manner.

The Five Year Review report is available below for download.

The first pollution control measures were implemented in the early 1970s. Contaminant studies began in 1990 when the U.S. Environmental Protection Agency (EPA), in cooperation with the U.S. Fish and Wildlife Service and DEC, conducted a reconnaissance survey for organic and inorganic compounds in the Sitka area, including the mill site and adjacent Sawmill Cove. Under contract with EPA and following mill closure in the fall of 1993, the consulting firm Ecology and Environment conducted an expanded site inspection in 1994. The firm conducted an integrated removal assessment in 1995, again under contract with EPA.

The State of Alaska assumed oversight of the investigation and cleanup from EPA in the fall of 1995. A Commitment Agreement signed by APC and DEC required APC to investigate and remediate any and all constituents of concern present at the site in concentrations above levels determined to be a threat to human health and the environment. DEC was appointed as the lead oversight agency. A number of other state, federal, and tribal organizations participated as members of the Site Investigation and Remediation Team.

The mill used a magnesium acid sulfite process to produce high-grade wood fiber pulp. Chemicals used at the facility included sulfur, magnesium oxide, sodium hydroxide, and chlorine gas. Waste streams generated in the process included wood waste, boiler bottom ash, fly ash, wastewater, and wastewater treatment sludge. Wood waste or hog fuel was burned in the facility's power boilers, and was also disposed of in the Herring Cove Wood Waste Landfill. Over the lifetime of the mill, ash was disposed in several ways, including discharge through the mill stacks, on-site burial, and off-site burial at the Industrial Mill Waste Landfill and the Sitka Municipal landfill. For three months in 1990, ash was slurried with mill wastewater for discharge into Silver Bay. Wastewater was discharged via the facility's two permitted wastewater outfalls. Other outfalls were used to discharge stormwater runoff. Process effluent contained pulp process waste and, potentially, any chemicals used in or resulting from the manufacturing process. Stormwater discharges may have contained any chemical used at the site that spilled or leaked onto the ground. Other sources of contamination included spills and incidental releases of chemicals, including petroleum products, PCBs, and solvents. Contaminants of potential concern included petroleum hydrocarbons, dioxin, cadmium, nickel, ammonia, 4-methylphenol, and other wood waste degradation compounds in various combinations and concentrations.

Risks to human health were evaluated, considering exposure to individuals from both the Sawmill Bay Cove and developed Mill site areas. The human health risk assessment identified that people could possibly have been exposed to contaminants through inhalation, skin absorption, or accidental ingestion of contaminated ash, soil, or surface water. The ecological risk assessment documented that the Sawmill Cove sea floor community had been severely impacted by wood waste residues and chemical break-down products. Cleanup remedies were taken to prevent these forms of exposure to humans. DEC concluded that the Sawmill Cove ecology would naturally recover over time if left undisturbed.