The former Beatson Mine is located on the west side near the north end of Latouche Island in Prince William Sound. The Beatson-Bonanza claims were discovered by the Beatson Copper Company in 1897, and production of a copper sulfide ore at the Beatson Mine began in 1904. The "Alaska Syndicate" (J.P. Morgan and the Guggenheim family) purchased the mine in 1907, and then, in 1910, the mine was purchased by the Kennecott Copper Corporation, later renamed the Kennecott Utah Copper Corporation in 1989, when it was purchased by Rio Tinto. At its peak, in 1917-1918, there were about 300 people working at the Beatson Mine and about 4,000 people living on Latouche Island. The mine closed in 1930, reportedly due to low copper prices and little remaining high quality ore. Total copper production from the mine is reported as 182,600,000 pounds.

The Kennecott Copper Corporation, then owned by British Petroleum, owned the Beatson Mine property until 1962 when they sold the surface rights to James Sumpter. The mine-related structures were demolished in the 1960s-early 1970s. James Sumpter, operating as Latouche Island Development Corporation, owned the land until 1976 when he sold it to Basil and Elizabeth Bolstridge and Alfred and Agnes Derkerverkian. In 1978, the property was sold to Donald Marino, operating as Rare Earth, Inc. Mr. Marino subdivided the property, built roads and an airstrip using waste rock, and began selling parcels for residential or recreational use. In 2007, the ownership of the unsold parcels transferred to Laura Schafer Marino. Additional parcels were sold to private parties. According to information on the Alaska Department of Natural Resources Recorder’s Office, there are approximately 106 property owners of former mine property. Additional roads have been developed using waste rock and several cabins have been constructed. The State of Alaska owns the intertidal lands. The land on Latouche Island outside of the former mining claims area is owned by the Chugach Alaska Corporation.

In 2013, the Alaska Department of Environmental Conservation (ADEC) learned that potential contamination was present at the former Beatson Mine property. ADEC researched the mine history and identified Rio Tinto as the current corporate owner of the former mine company. Rio Tinto began investigating possible environmental impacts at the site in 2016.

Past Environmental History and Sampling

The principal ore body consists of chalcopyrite (copper-iron sulfide), pyrrhotite, and pyrite (both iron sulfides) scattered through the altered country rock and in small veinlets associated with quartz. Copper was found at 5-10% in small loads of ore. The surface oxidizing of the iron sulfide (pyrite and pyrrhotite) released small quantity of sulfuric acid (H2SO4). This process, due to weathering, is increased by the former mining activities, which may increase the acidity of surrounding waters and soil. Crushing of the host rock increases the surface exposed to weathering and subsequently the rate of acid formation. Acid mine drainage is visible throughout the area and consists of yellow and orange precipitates in the surface water.

Rio Tinto conducted work at the Beatson Mine in both 2016 and 2018. These activities included site reconnaissance, sample collection (soil, waste rock, surface water, groundwater, sediment, and biological tissue), and ecological investigation. Conducting these kinds of activities over several years is typical for large, complex projects such as this one. Some of the broad conclusions from the report include:

Rio Tinto has completed a fairly thorough investigation of this site and some additional information is needed. Further sampling is needed to determine if there are trends and seasonal variation in metals concentrations in surface water and groundwater. 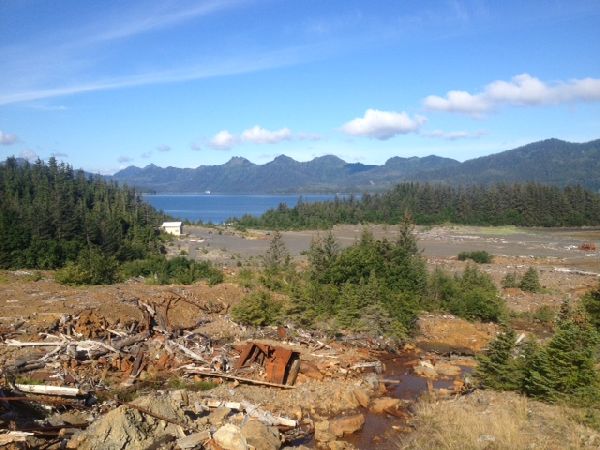 In April 2019, Rio Tinto conducted a site visit to perform flow measurements on site streams and collect groundwater samples. During the summer, Rio Tinto plans to spend a few weeks on site conducting field work. They will collect some additional samples and gather other types of site information to evaluate possible cleanup strategies and techniques. Rio Tinto will also collect surface water and groundwater samples in the fall. In 2019, Rio Tinto will conduct both human health and ecological risk assessments to evaluate risk and develop proposed cleanup levels for the site. The human health and ecological risk assessments will likely be available in late 2019, and a report about the 2019 field work will be available in 2020.

After reviewing the human health and ecological risk assessments, DEC will approve cleanup levels for the site which will determine the extent of the area which needs to be cleaned up. Once cleanup levels have been set, DEC will work with Rio Tinto to develop a strategy to clean up the site.