The Cape Romanzof Long Range Radar Site covers 4,900 acres within the Yukon Delta National Wildlife Refuge. It was one of 10 original Aircraft Control and Warning sites in the Alaska Air Defense System. The nearest communities, Scammon Bay (pop. 498 in 2011) and Hooper Bay (pop. 1,137 in 2011), are located 15 miles east and south respectively. The Air Force has identified 15 contaminated sites that include landfills, drum storage areas, fuel spill areas and leaking underground storage tanks, or USTs. The facility continues to be operated as a minimally attended radar site.

1985: The Air Force had a release of roughly 14,000 gallons from a fuel bladder being pulled across the site. In 1991, a release of 46,000 gallons of diesel fuel occurred from an active pipeline.

1992: The U.S. Fish & Wildlife Service released a report of its findings on an investigation at the facility. Creek sediments were contaminated with petroleum, and tissue samples from dolly varden, voles and red fox contained petroleum, PCBs and DDT-related compounds.

The Environmental Protection Agency conducted a preliminary site assessment at the facility and determined it did not score high enough to added to the National Priorities List.

1995: The Air Force excavated contaminated soils from three source areas – SS015 (a spill site/USTs), SS008 (a waste accumulation area) and SS014 (a drum storage area). At LF003 (a landfill site), a soil cover was installed as a remedial action.

1997: Three above-ground biocells were constructed to remediate the petroleum-contaminated soil. In 2000, the Air Force proposed to remove the three biocells and use them as cover on the active landfill since cleanup was not progressing as planned.

2002: A Record of Decision for Interim Remedial Action was signed for SS013 (a spill site), SS015 and LF003. The selected remedy for SS013 and SS015 is monitored natural attenuation with institutional controls for petroleum-contaminated soil, sediment, groundwater and surface water. At LF003, the selected remedy is landfill closure with PCB hotspot removal of PCB-contaminated soil.

2007: A Record of Decision for SS001 (a waste accumulation area), SS008, LF002 (a landfill), OT005 (road oiling site), OT006 (drums and building debris site) and LF012 (a disposal pit/landfill site) was signed. The selected remedy is no further action. A cleanup complete determination was given for the sites.

2010: Because the first CERCLA Five-Year Review for LF003 (completed in 2008) found that the Record of Decision (ROD)-selected remedy, Cleanup with Institutional Controls, was not protective of human health and the environment, an initial screening of new alternatives for LF003 was conducted.

2011: A cleanup complete with institutional controls (ICs) was approved by ADEC on February 23 a Decision Document (DD) for SS013 and SS015.

2012: The final Proposed Plan for LF003, SS010, SS016, and SS017 was issued. Preferred alternatives: LF003-PCB contaminated soil and sediment will be excavated and sent off-site for disposal. Long-term monitoring of the sediment will occur as part of the cleanup decision. At SS010, the petroleum contaminated sub-surface soil and groundwater will be subject to institution controls, engineering controls, natural attenuation and long-term monitoring. For SS016 and SS017, PCB contaminated soil will be excavated and disposed of off-site.

2014: An institutional controls inspection occurred for LF003, ST009, SS010. Additional signage was recommended to be installed at LF003, ST009, and SS010 as implied in the land use controls management plan.

2015: A feasibility study for OB942 open burn pit was conducted. The alternatives that were considered for inclusion in a future Proposed Plan and decision document are: 1) no action, 2) land use controls (LUCs), 3) capping, LUCs, and long-term monitoring (LTM), 4) Removal and offsite disposal.

2017: A Record of Decision for OB942 identified the selected remedy: LUCs. Dig restrictions and signage will be utilized along with a notice of environmental contamination filed with U.S. Air Force Real Property Office and Alaska Dept. of Natural Resources land records. Five Year-Reviews will be required.

2018: A Third Five-Year Review was conducted to evaluate the protectiveness of cleanup decisions made for DP011, LF003, SS010. DP011 and SS010 are protective. LF003’s remedy is not protective: exposed debris is present at the site, eroded soil barriers have not been installed and PCB-contaminated sediments remain at the site. In order for the remedy to be protective, the integrity of the landfill cap must be restored through fill placement and maintenance, eroded soil control barriers must be installed, and contaminated sediment must be remediated in accordance with the ROD. Due to funding delays and contractual issues, no groundwater monitoring was conducted in 2018 at Cape Romanzof. 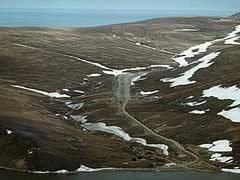 This photo shows the road to the site on Cape Romanzof.

Institutional controls remain in place for contaminated soil and groundwater at several sites. Long-term monitoring of surface water and groundwater is funded and it will occur in 2019 as required by the decision documents.

Air Force documents on the Cape Romanzof cleanup can be found on the Air Force Administrative Record Website.