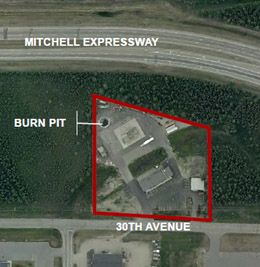 Per- and polyfluorinated compounds (PFAS) were first discovered at the City of Fairbanks Regional Fire Training Center (RFTC) in 2015 when the City of Fairbanks sampled standing water contained within the burn pit. In September 2015, Shannon & Wilson, Inc. completed an investigation of soil and groundwater on the RFTC property and found PFAS and petroleum compounds in the groundwater on the site.

The burn pit is 30 feet in diameter and lined. Firefighting foam containing PFAS is suspected to have leaked through the liner or over-sprayed the edges of the pit during training activities. The burn pit was constructed in 1984 and was used for about 20 years.

In May 2016, the U.S. Environmental Protection Agency (EPA) issued a lifetime health advisory (LHA) level of 70 (ng/L) for the sum of the PFOS and PFOA concentrations. Prior to 2016 the City of Fairbanks referenced the EPA provisional health advisory (PHA) levels for PFOS and PFOA in drinking water, established in 2009.

The U.S. Environmental Protection Agency (EPA) established a provisional health advisory (PHA) level for PFOS and PFOA in drinking water in 2009. However, in May 2016, the EPA issued a new lifetime health advisory (LHA) level of 70 nanograms per liter (ng/L) for the sum of the PFOS and PFOA concentrations. This new level is significantly lower resulting in an increased need for more widespread investigation of drinking water.

Due to concern about PFAS in drinking water, the City of Fairbanks began searching for water supply wells (including drinking water wells) immediately after the discovery of PFAS in groundwater. This map shows the August 2019 results of wells tested for PFAS in the area around the Fairbanks Regional Fire Training Center.

The search was expanded iteratively between February 2016 and February 2017, and now extends to areas around Peger Lake south of 30th Avenue, the Davis Road sports fields and other properties between the Mitchell Expressway and Eagan Avenue or Airport Way, and properties on both sides of the Chena River between Loftus Road and University Avenue.

DEC continues to work with the City of Fairbanks to identify additional wells for testing and to install a monitoring well network to help us understand the extent of contamination in the groundwater. The City of Fairbanks is currently providing water to affected residents, and has connected most affected properties to the municipal water system. The City is planning to connect additional homes and businesses to municipal water during the 2018 construction season. The DEC has also requested a work plan for site characterization from the City.

If you have any questions or need additional information, please contact Robert Burgess, DEC’s project manager for the site, at 907-451-2153 or robert.burgess@alaska.gov.