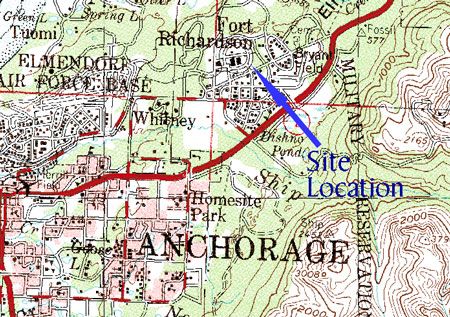 Fort Richardson Army Post is located approximately seven miles east of downtown Anchorage. It is bordered on the west by Elmendorf Air Force Base and on the north by training areas, Eagle Bay and the Knik Arm of Cook Inlet. On the eastern border is the Glenn Highway, and to the south are recreational and training areas, and Ship Creek. The southern and eastern boundaries consist of undeveloped lands and Chugach State Park.

The Post was established in 1939 on what is now Elemendorf Air Force Base in response to increasing world tensions. After the Pearl Harbor attack in 1941, the Fort was charged with defending Alaska from invasion and coordinating the Alaskan war effort. During the war its troops numbered 7,800. After establishment of the Air Force as a separate service in 1947, the Army post was moved to its present location in 1950. A series of realignments of the U.S. Army changed the nature and mission of the troops based at Fort Richardson, the most recent of which was in 1998 when the 172nd Infantry Brigade (Separate) was reactivated.

Through military operations over the years, releases of hazardous chemicals occurred as a result of spills and historical disposal practices. In response to increased environmental awareness nationwide, Congress passed the Comprehensive Environmental Response, Compensation, and Liability Act (CERCLA) in 1980, directing the U.S. Environmental Protection Agency to investigate contaminated sites. In 1984 Congress established a separate environmental restoration program specifically for the Department of Defense (the Defense Environmental Restoration Program). The U.S. Army's investigation of contaminated sites at Fort Richardson began in 1988 under the Army's "Installation Restoration Program." Because of known or suspected releases of hazardous chemicals, the Post was placed on the CERCLA National Priority List of contaminated sites in need of cleanup in 1994. As a result, environmental assessment and cleanup activities at Fort Richardson proceed according to the process and requirements of CERCLA.

Three parties direct the cleanup: the U.S. Army as the responsible party, the U.S. Environmental Protection Agency to ensure that cleanup meets federal standards, and the Alaska Department of Environmental Conservation to ensure that it meets state standards. CERCLA governs non-petroleum contamination, like that from solvents, dry cleaning fluids, and PCBs. At Fort Richardson the state's cleanup process and standards are applied to petroleum contamination. 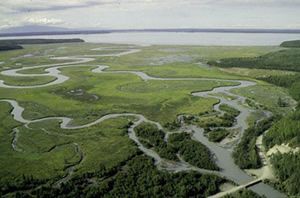 Cleanup of contamination caused by non-petroleum sources has been guided by the terms of the federal Comprehensive Environmental Response, Compensation, and Liability Act. Active sites are currently being addressed under a federal facility agreement between the Army, the U.S. Environmental Protection Agency (EPA) and DEC:

SS090 is listed as a source area under CERLCA because of dieldrin (a pesticide) contamination in soil.

The Army, DEC and EPA agree that OUs A and D do not pose unacceptable risks and therefore do not require further action under CERCLA. Information on these areas is documented in two records of decision, which are available in the administrative record and at each agency. OUs B and E are listed as source areas under CERCLA because of chlorinated solvents contamination in the groundwater and soil. OU C is listed as a source area under CERCLA because of white phosphorus contamination—an ecological threat to waterfowl --in the sediments at Eagle River Flats.

Petroleum contamination is not normally addressed under CERCLA cleanups. The State and Army have entered into an environmental restoration agreement (downloadable below) to address petroleum contamination from fuel spills and leaking aboveground fuel storage tanks. A separate compliance agreement was developed to address leaking underground storage tanks. Cleanup of these sites proceeds according to standards and the process set in state law. Some of the sites addressed by these two-party agreements include:

The Army has published a quarterly newsletter since 1995, conducted many public meetings, and set up information repositories. The Army and DEC have sought community involvement via the Restoration Advisory Board (1997-2003). Currently, community involvment is accomplished via the Community Environmental Board (2004 to present).

Since World War II, Fort Richardson has supported combat operations that have resulted in release of various hazardous substances to soil and groundwater. Fuel spills and leaks occurred over years of operations. Used oils, solvents, and fuels were reportedly discharged to floor drains that went to sewers or underground discharge wells. Used solvents and contaminated fuels were routinely mixed with waste oils in the past and used for fire training practice at burn pits. Current Army practices no longer allow uncontrolled or unpermitted releases of pollutants to the environment.

The primary contaminant at Eagle River Flats (OU C) is white phosphorus, mostly generated from unburned phosphorus used in smoke artillery rounds for targeting areas on the flats. Sediment and surface water samples collected from Eagle River Flats in 1989 and 1991 contained elevated levels of white phosphorus. The Army discontinued its use in 1991 when the substance was found to be fatal to waterfowl.

The Roosevelt Road Transmitter site is contaminated with petroleum and metals. Chlorinated solvents are present in soil and groundwater at the Poleline Road Disposal Area. The soil around Building 35-752 is contaminated by polychlorinated biphenyls (PCBs). Soil at Building 986's dry well is contaminated with petroleum and metals. Munitions, like heavy artillery rounds and mortar rounds, which did not explode on impact can be found at Eagle River Flats (OU C), and items such as artillery rounds, rifle grenades, white phosphorus smoke grenades, and a bazooka rocket warhead were found at Poleline Road (OU B).

The EPA has been working with federal agencies for several years to address Perfluorooctane Sulfonate (PFOS) and Perfluorooctanoic Acid (PFOA) as environmental contaminants. PFOS and PFOA are components of aqueous film-forming foam (AFFF) used to extinguish liquid fuel fires. As of 2016, ADEC has established cleanup levels for PFOS and PFOA in groundwater and soil. There are currently two sites associated with AFFF usage/disposal: AFFF Area #1 AT029 aka Operable Unit A Ruff Road Former Fire Training Area, AFFF Area #4 Fire Station 5 which will need to be investigated in the near future (2020) under CERCLA. 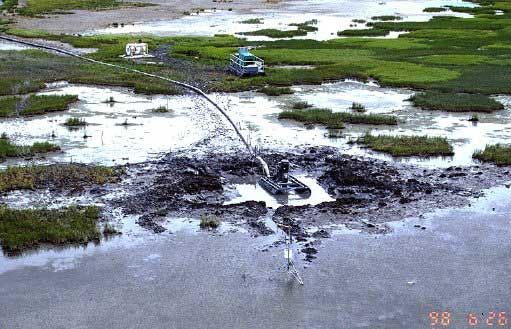 Pump placed in pond to dry out sediments to render white phosphorus harmless.

After several years of effort, Fort Richardson's cleanup work is mostly done. Over 131 sites have been closed, either through cleanup or through restrictions which protect humans and the environment while natural breakdown of remaining contamination takes place.

In Eagle River Flats (Operable Unit C) from 1998-2006, ponds with white phosphorus contamination have been drained to dry the sediments in order to oxidize the white phosphorus, which renders it harmless to the waterfowl. Over 75 percent of the contaminated areas have been addressed. The remaining area is to be treated in 2007, which is the last year for active treatment. The Army will then be in the long term monitoring phase to ensure that the remedial action will meet the long term goal of reducing duck mortality to levels identified in the Record of Decision.

Operable Unit E, composed of Building 35-752 and the Armored vehicle maintenance area, has been investigated for chlorinated solvent contamination, such as carbon tetrachloride and tetrachloroethene (PCE), in the groundwater. The record of decision was signed in 2005. The selected remedy is long-term groundwater monitoring until cleanup levels are achieved.

Unexploded ordnance (UXO) represents safety as well as environmental risks when left in place, however, finding and removing it can be extremely difficult. Restrictions on access and future use of the land are commonly used to protect people and the environment from UXO. These restrictions, or "institutional controls," will be developed for Poleline Road Disposal Area (OU B) to prevent and limit human and environmental exposure to hazardous substances. Eagle River Flats (OU C) continues to be used as an active range, therefore access to the site will continue to be restricted. At this time, the military plans to continue using the site as an operational range. Potential UXO and the estuarine habitat prevent use of the area as future residential or industrial sites. At the time OU C is closed, the human health risk from exposure to UXO will be addressed using the federal and state standards that are in place at the time.

A Fourth Five-Year Review for post-wide source areas was conducted to ensure that cleanup actions taken under CERCLA remain protective of human health and the environment. The review was completed in 2018 and is being finalized in 2019 by the Air Force.

There are a number of individual contaminated sites associated with Fort Richardson, and reports on the status of each are available on DEC's databases of contaminated sites and leaking underground storage tanks. Below are links to our database reports for 10 of the most significant sites. We have a glossary available to help you with any acronyms used in the reports.

Documents that record investigation and cleanup decisions can be found in the Administrative Record located at the Alaska Resource Library and Information Service and available on the Air Force website:

Air Force documents on the Richardson cleanup are available on the Air Force Website. Follow these instructions: