The property, originally on a 22 acre parcel at 1485 30th Avenue in Fairbanks, operated as a salvage yard known as Miller Salvage as early as 1947, when the property was purchased by its previous owner who is now deceased. In 2004, the western half of the property (11 acres) was sold to Friends Community Church, who in conjunction with the seller removed some of the debris from their parcel in order to build their church building. The address of the eastern 11 acres became 1407 30th Avenue at that time. The currently operating Miller Salvage, Inc. is located on an adjacent parcel. The owners and operators of the original salvage yard accepted cars and car parts, vehicle batteries, building debris, scrap metal, transformers, drums and tanks of liquids including solvents, tar, fuels and oils, grease, and miscellaneous drums from construction companies and the military. The site was inspected by the EPA in 1986, with reports of the findings published in 1989-1991. The site was ranked on the national priorities list (NPL) but did not warrant further action under the Comprehensive Environmental Response, Compensation, & Liability Act (CERCLA or SuperFund) at the time. Since then, the site continued operating as a salvage operation until the early 2010s. The site has been subject to numerous complaints over the years in addition to multiple responses by local fire and police departments.

In May 2017, the Alaska Department of Environmental Conservation (DEC) received complaints of actively leaking drums on the properties. DEC responded to the complaints and observed several leaking drums, stained soil and distressed vegetation, and puddling of product on the eastern 11 acre parcel. DEC also observed several open-top drums containing products. 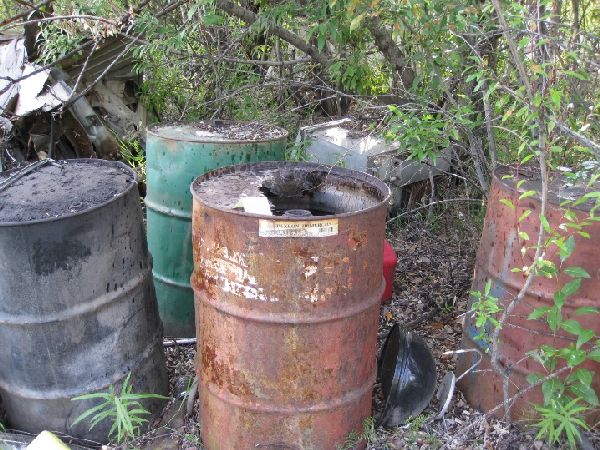 Open-top drums pointed out in 2017 complaints to department. 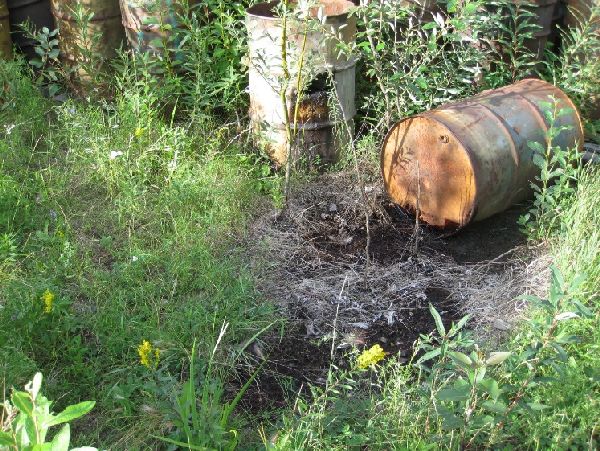 Leaking drums pointed out in 2017 complaints to department. 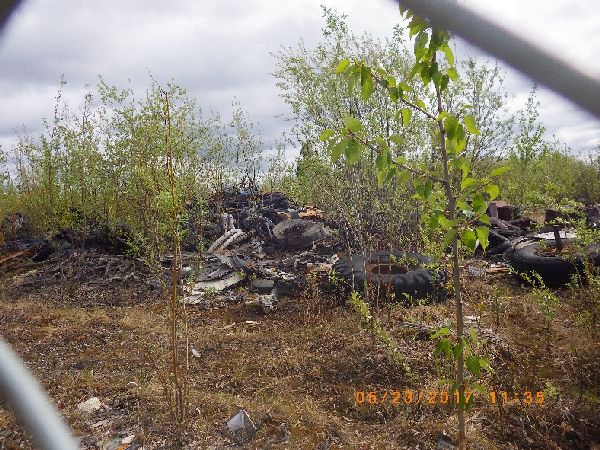 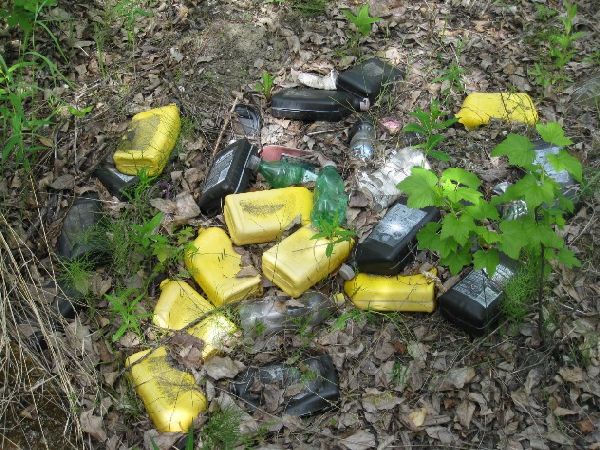 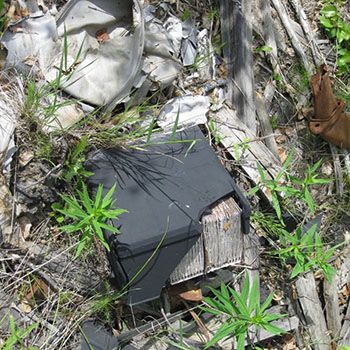 One of dozens of broken batteries at the site. 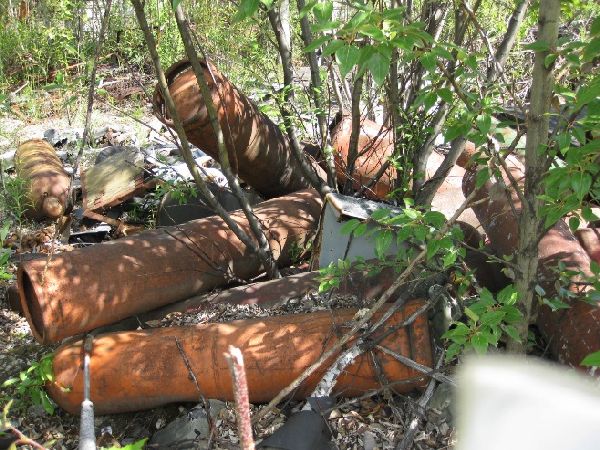 Compressed gas cylinders are among the hazards at the site.

In September 2017, the National Response Corporation (NRC) was contracted by DEC to begin cleanup of the Miller property. During cleanup, NRC identified actively leaking drums and drums at risk of imminent release (i.e. open top, dented, flaking, corrosion, damaged, or bulging). Field tests have indicated that the contents of the drums include chlorinated solvents, other types of hazardous solvents, polychlorinated biphenyls (PCBs), grease, and oil. One of the open-top drums contained a deceased bird.

Additionally, two rail cars filled with asphalt tar exist on the property, one on the surface and one buried. In 2005, a cat and dog skeleton were observed in the asphalt tar leaking from the buried railcars. A neighbor stated that several animals have become trapped in the asphalt tar over the years. Currently the majority of the tar is buried, however the slow release is ongoing and may still present a hazard. 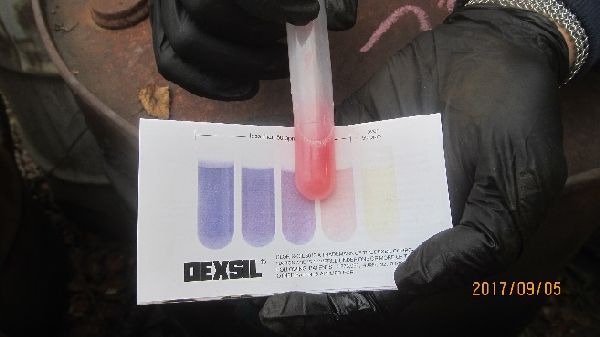 Results from PCB field screening for oily liquids in one of the drums stored on the property. 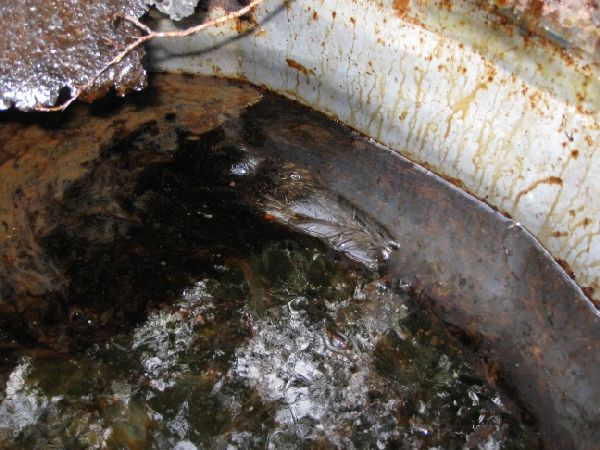 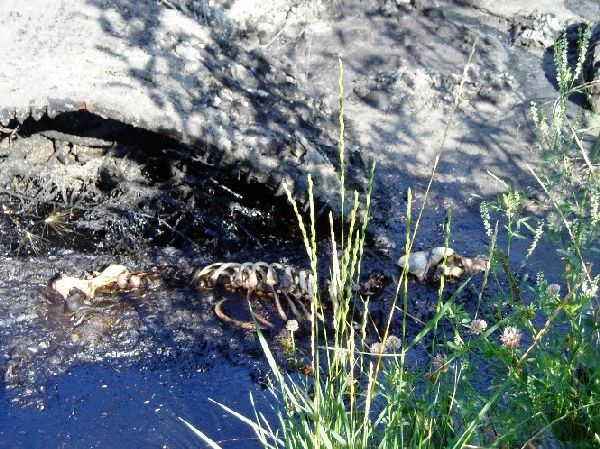 Dog bones observed in tar leaking from rail car in 2005. 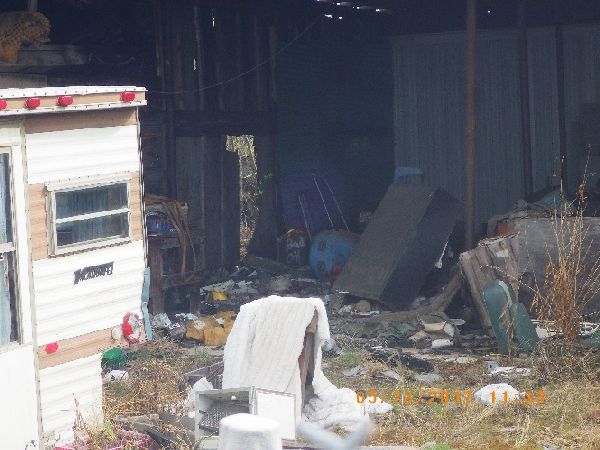 Interior of the shop building. 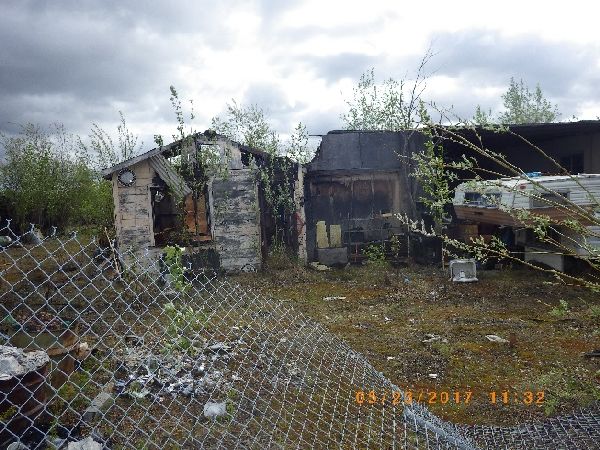 Shop building and burned shack; the downed fence is likely where transients were accessing the site. 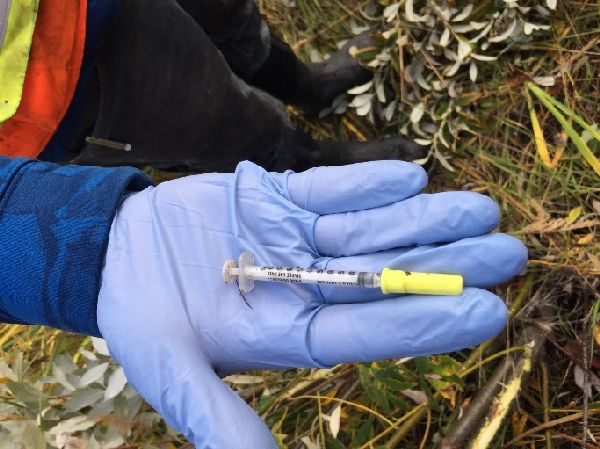 NRC mobilized to the site on August 30, 2017 and immediately began installing fencing and warning signs to help deter transients and other trespassers from accessing the site. Following fencing of the 11-acre Miller property, NRC overpacked leaking drums and containers and sorted through the large piles of debris. Hazardous materials from the debris piles were moved to a secondary containment area to later be transported for disposal. NRC will consolidate waste and remove it from the site in addition to excavating soil contamination hotspots to reduce risk of exposure. 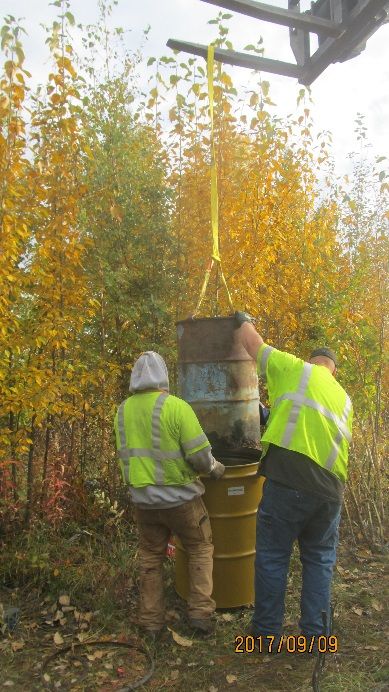 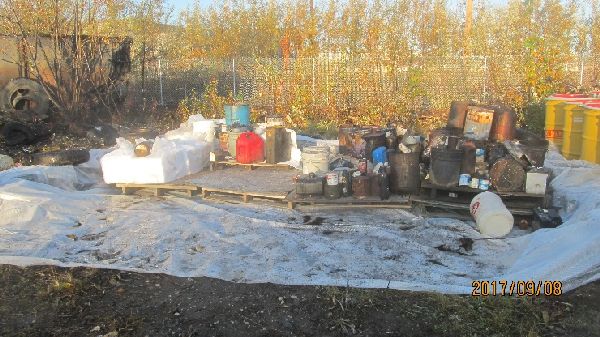 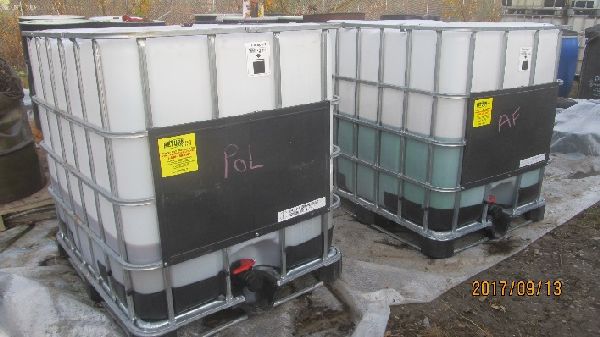 Totes being used to consolidate petroleum, oil, and lubricants (left) and antifreeze (right).