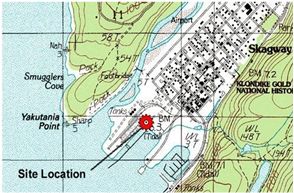 In the mid-1960s, the Municipality of Skagway (MOS) constructed a peninsula over tidal flats between the Skagway River and the State Ferry Dock by importing granite-based alluvial fill material and dredging sediments up to the eastern shoreline, thus expanding the harbor basin. In 1967 the MOS leased property on the harbor side of the peninsula to White Pass and Yukon Route Railroad (White Pass) and by 1969, White Pass had constructed the Skagway (Nahku) Ore Terminal (SOT or terminal) and began transporting ore by rail from the Cypress Anvil (Faro) Mine located in the Yukon Territory in Canada.

In the mid-1960s, the Municipality of Skagway (MOS) constructed a peninsula over tidal flats between the Skagway River and the State Ferry Dock by importing granite-based alluvial fill material and dredging sediments up to the eastern shoreline, thus expanding the harbor basin. In 1967 the MOS leased property on the harbor side of the peninsula to White Pass and Yukon Route Railroad (White Pass) and by 1969, White Pass had constructed the Skagway (Nahku) Ore Terminal (SOT or terminal) and began transporting ore by rail from the Cypress Anvil (Faro) Mine located in the Yukon Territory in Canada.

Lead and zinc ore concentrate from the Yukon was loaded onto freighters and barges at the terminal from 1967-1997, with brief interruptions from 1982-1986 and 1995-1997. An estimated volume of 50,000 tons of low-grade zinc (60%) and lead (40%) ore concentrate from the Faro Mine passed through the terminal each month. Ore was transported to the terminal by White Pass railcars until 1982, when truck transport of ore by highway began and continues today. Ore concentrate was loaded onto freighters and barges every two weeks on an open conveyor system until 1991 when the system was enclosed during a major renovation of the entire terminal. 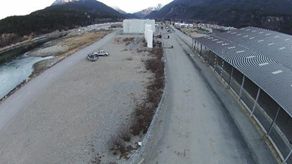 Curragh Resources Inc. (Curragh) purchased mining operations from Cypress Anvil at the Faro Mine in 1986, and leased the terminal from White Pass. The Bowhead Equipment Company (Bowhead) operated the facility from 1986-1993. In 1990, the Alaska Industrial Development and Export Authority (AIDEA) purchased the terminal facilities from White Pass and began renovations to control fugitive loss of ore concentrate at the terminal and along the transport routes through Skagway. Meanwhile, Bowhead continued to operate the terminal until it was shut down in 1993. From that time forward, Mineral Services Inc. (MSI) operated the terminal periodically for an estimated total of 16 months between 1995 and 1997, after which terminal operations ceased.

AIDEA resumed renovation of the SOT in 2006-07 supported by Sherwood Copper/Minto Explorations, a Canadian mining company interested in transporting copper ore from the Minto Project, a high grade copper-gold deposit located 240 km north of Whitehorse, Yukon Territory, to bulk freighters at the SOT. Since 2010, Capstone Mining LLC (Capstone) assumed control of the Project and continues to operate the Minto Mine as of 2015. MSI currently operates the SOT facility for Capstone.

In 1989, a DEC assessment of surface soil in collaboration with the MOS found elevated lead and zinc metals concentrations in soil on the ore transport routes (rail and truck) through Skagway and at the SOT facility property. DEC and MOS agreed upon an industrial cleanup level for lead in remaining soil of 1,000 parts per million (PPM) at the terminal and 500 PPM in all other areas on the ore transport routes.

DEC subsequently signed separate Compliance Orders by Consent (COBC) agreements with White Pass and with Bowhead/Curragh to implement site investigation and cleanup which included: street and residential yard cleanups, train track cleanup, and the terminal property. In 1990, DEC determined the cleanup in all areas had met the COBC requirements, however, the DEC/MOS approved lead cleanup levels for the SOT property required Institutional Controls (ICs) limiting land use to industrial only and required future ore terminal owner/operators to limit, prohibit, and protect against activities that interfere with improvements designed to encapsulate or control exposure to hazardous levels of residual lead contamination in subsurface soil through excavation or leaching of contamination into groundwater.

The polluting effects of historical operations at the SOT left elevated concentrations of lead and other metals and petroleum polyaromatic hydrocarbon (PAH) chemicals of concern (COCs) in harbor sediments under the ship loading dock, extending outward into the basin. In 2007-09 Tetra Tech performed a Total Maximum Daily Load assessment of pollution in Skagway Harbor for DEC. The study resulted in a DEC determination that PAH COCs were having a toxic effect on aquatic life and listed Skagway Harbor as an impaired water body in accordance with the Clean Water Act (CWA.))

In an effort to reverse pollution of the harbor and the CWA impairment listing, in 2013-2015, the MOS Gateway Initiative Project characterized the SOT harbor sediments to define the extent of sediment contamination. In conjunction with an Army Corps of Engineers dredge permit, the MOS plans to remove and stabilize contaminated sediments on the upland SOT property site. White Pass is not directly involved but is providing support for the cleanup of contaminated sediments and the MOS Gateway Initiative Project development of new waterfront structures and a deeper harbor floor. 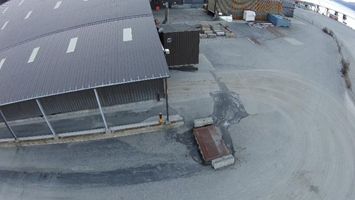 In April, 2015, in response to a complaint from the MOS, DEC staff with Division of Water completed a site inspection at the SOT sponsored by the current terminal operators Capstone and MSI. DEC’s Division of Water issued a Site Inspection Report to MSI with a Notice of Violation (NOV) stating that facility operators failed to comply with conditions of the Alaska Administrative Code requiring permit coverage and approval to discharge prior to any release of treated or untreated water and sludge on the SOT property. If contaminated discharges are occurring, they add additional contamination to areas where institutional controls are currently in effect as a result of impacts from historical terminal operations, as well as exceed the TMDL approved for the Skagway Harbor. In response to the NOV, MSI submitted a Corrective Action Plan on April 29 which is currently under review by the Division of Water.