Two Formerly Used Defense Sites (FUDS) are located on St. Lawrence Island. The U.S. military stationed forces in and around Gambell during and after World War II. The Air Force operated an Aircraft Control and Warning Station in Gambell from 1948 to 1956. The site was abandoned after a similar facility was constructed at Northeast Cape on the island. The landowners are the Sivuqaq Native Corporation (for Gambell) and the Savoonga Native Corporation. The U.S. Army Corps of Engineers is responsible for cleanup at the sites through its Formerly Used Defense Sites program. 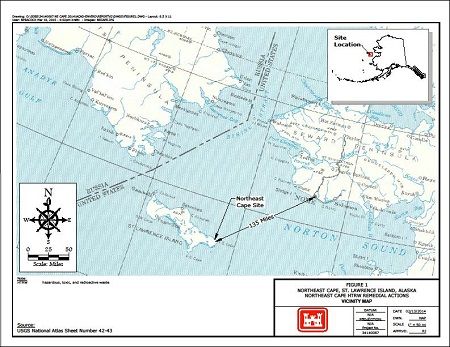 The cleanup of the Formerly Used Defense Sites at Gambell was completed in 2007 and 2008, when all of the associated contaminated sites were determined to be cleanup complete. The Gambell sites were subdivided into 38 separate areas. The majority of contamination was petroleum-impacted soil. There were also areas of low concentrations of dioxin (below cleanup standards) and reported unexploded ordnance (UXO) in Troutman Lake. Construction debris, military equipment and small quantities of hazardous substances were removed through the Native American Lands Environmental Mitigation Program (NALEMP). Additional areas with buried material were reported to exist around the village. An investigation of the groundwater near the village water supply (Site 5) detected a low-level concentration of diesel range organics (DRO) in one monitoring well in 1998. Subsequent sampling did not find DRO in the well, and testing of the water supply well showed no detectable contamination.

The Northeast Cape FUDS is located about 60 aerial miles from Savoonga, the nearest village. Northeast Cape included a White Alice Communication Site (WAC) that was operated from 1957 to 1972. Two Decision Documents (DD) were finalized for the Northeast Cape FUDS in 2009; one separate DD for the Site 7 Cargo Beach Landfill site and a second DD for all of the remaining sites. USACE conducted remedial investigations and removal actions at the Northeast Cape sites during 2008-2014. Northeast Cape was subdivided into 29 separate areas in addition to the White Alice site uphill about a half-mile from the Headquarters Area. An estimated 180,000-gallon diesel fuel spill in 1969 impacted a nearby river drainage where remedial investigation results also confirmed isolated detections of generally low concentrations of volatile organic compounds, pesticides and metals. Although prior removal actions have resulted in the removal of the majority of all contamination sources from Northeast Cape, there remain large areas of residual extents of petroleum contamination in the soil and groundwater. Numerous technical challenges were identified regarding the impracticality and infeasibility of physical removal of contamination in many locations and as a result, the selected remedies in the 2009 Decision Document were based upon determinations that physical removal actions at these areas would result in greater damage to the environment and natural resources of the drainage and ecosystem areas while also increasing the mobility and exposure risk associated with the contamination. Large extents of PCBs in soil were removed from several locations across Northeast Cape and the most stringent cleanup level for PCBs in soil (1 mg/kg) was achieved at all PCB sites. Contaminated sediment in the river drainage basin (referred to as Site 28), was removed via dredging and disposed offsite in conjunction with the 2013 and 2014 removal action efforts. All of the buildings, above ground structures and debris have been removed from Northeast Cape, including those at the White Alice site, and disposed of off-island.

The communities and residents of Gambell and Savoonga have had concerns and have been active and involved throughout the FUDS cleanup process. Both communities and respective RABs received FUDS-funded grants for Technical Assistance for Public Participation (TAPP); between 2001-2008 for Gambell and between 2008-2014 for Northeast Cape. TAPP grants provide financial resources for communities to hire technical support to assist them with the technical aspects of the process and to help review and develop comments on the many associated documents.

The areas surrounding the Northeast Cape FUDS are used seasonally by Saint Lawrence Island residents for subsistence hunting and gathering. The community has expressed concern over cancer rates and a possible link to former military sites at Northeast Cape. There has also been concern over possible impacts to subsistence foods, such as reindeer and fish, from the area.

The Army Corps of Engineers began a risk assessment in 2001 to gather the missing data and discover any risks involved. Assessing risk involves considering many details such as the type of food consumed, how often it’s consumed, the contaminant levels, and the health sensitivities of the people who consume the food. ADEC and USACE worked extensively with the community during the three years it took to complete the risk assessment, during which the risk assessment surveys determined that island residents do not eat fish from Suqitughneq River. Residents do, however, fish along another stream that is located within the drainage. Dolly Varden fish tissue samples were collected from the Suqitughneq River drainage in 2001 and the analysis results indicated that the fish tissues contained PCBs at concentrations slightly above the ingestion levels recommended by the Environmental Protection Agency. The risk assessment concluded that since the Dolly Varden fish are migratory species and do not stay in the stream their whole lifetime, that the fish pick up contaminants from other sources in addition to the Suqitughneq River drainage, primarily the marine habitat.

Representatives from the Agency for Toxic Substance and Disease Registry visited both communities and conducted two separate health consultations in 1999 and 2013. ATSDR’s first consultation report, released in September 2000, concluded there was low risk from consumption of reindeer. It noted concerns, however, about fish consumed from the Suqitughneq River which flows adjacent to and downgradient of the Northeast Cape FUDS and is the receiving surface water body for the nearby and upgradient drainages. ATSDR further recommended residents avoid eating fish from the drainage until a more comprehensive remedial investigation and cleanup effort was completed; noting further that resident fish are not currently used from the Suqitughneq River as they are too small for subsistence use. The reports associated with ATSDR’s second health consultations for both Gambell and Savoonga were released in 2017. ATSDR concluded in both consultation reports that contamination associated with either the Gambell and/or the Northeast Cape FUDS did not represent unacceptable exposure risk(s) to the residents of Saint Lawrence Island.

Ground view after building demolition and removal actions at the headquarters facility were completed (USACE, 2013). All of the building and contaminated materials that were removed as part of the FUDS cleanup efforts were containerized and disposed of off-island.

The cleanup of the Formerly Used Defense Sites at Gambell was completed in 2007 and 2008, when all of the associated contaminated sites were determined to be cleanup complete.

USACE conducted remedial investigation and removal activities at Northeast Cape during the years of 2008-2014. USACE established and maintained active Restoration Advisory Boards (RABs) during the investigation and cleanup efforts for both the Gambell and Northeast Cape FUDS. Although the removal actions and primary remedial objectives are completed at both the Gambell and Northeast Cape FUDS, USACE continues to conduct public meetings with the communities in conjunction with ongoing CERCLA Five-year and Periodic Reviews as well as long-term monitoring efforts at Northeast Cape. ADEC continues to work with the community and the Army Corps of Engineers on the oversight and implementation of the going long-term management of Northeast Cape.

As of the end of 2018, approximately $125 million had been authorized and spent by the Department of Defense on contamination cleanup and remediation work at the Northeast Cape FUDS, including the prior demolition and offsite disposal of structures and debris. USACE conducted the first CERCLA Five-year Review in 2015 and developed and implemented the first Long-term Maintenance and Management Plan in 2016. In the years since the last removal actions were conducted in 2014, USACE has continued with remedy implementation activities, including long-term monitoring efforts and supplemental data gap investigation. USACE will conduct the second CERCLA Five-year Review effort in 2019.

Ground view looking southwest at the former WAC at Northeast Cape which was located about a half-mile uphill from the Headquarters Area (USACE, pre-2003).

The Army Corps of Engineers began removal of contamination and debris in 1999. The agency removed some areas of soil contaminated with low levels of dioxin. The community of Gambell was most concerned with the remaining debris. The Corps did not consider buried debris eligible for funding under its Formerly Used Defense Sites program and the Native Village of Gambell subsequently received several grants from the Native American Lands Environmental Mitigation Program (NALEMP) to fund additional debris cleanup at Gambell between 2003 and 2008. The Gambell NALEMP project was the largest in the nation, with 290,000 pounds of buried debris removed in 2006.

The investigation and cleanup at Gambell cost $7 million. As the investigation and remedial work progressed, new areas of contamination were reported or discovered, lengthening the process. USACE issued a Record of Decision for Gambell in 2007 at which time ADEC issued approvals for the closure of all 38 sites at Gambell. For all the sites that had hazardous and toxic waste in containers, those containers were taken to hazardous waste treatment facilities off the island. 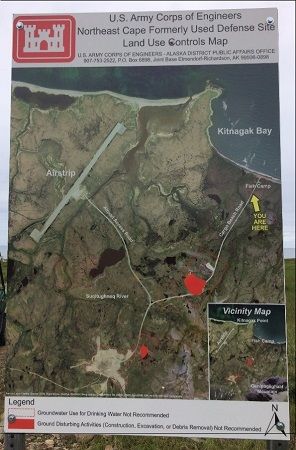 Sign installed by USACE in August 2018 along the Cargo Beach road near the seasonal subsistence camp. The sign depicts a map of the Northeast Cape site and areas of concern. Photo shows English language side of sign (C.Dunkin-ADEC, August 2018). 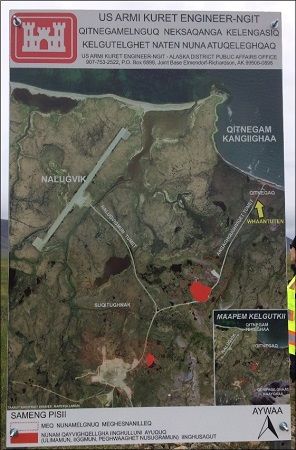 Sign installed by USACE in August 2018 along the Cargo Beach road near the seasonal subsistence camp. The sign depicts a map of the Northeast Cape site and areas of concern. Photo shows Yupik language side of sign (C.Dunkin-ADEC, August 2018).