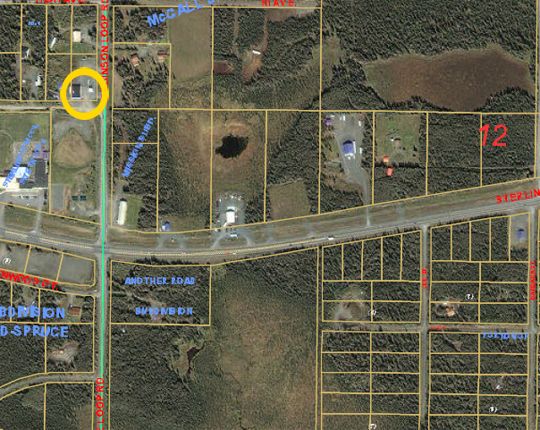 This aerial photo shows the former Zipmart gas station circled in yellow. Contamination from gasoline has spread underground to areas to the right and down (southeast). For a diagram of the estimated plume size and information from sampling wells, see the downloadable file under "More Information" at the bottom of the page. (Photo courtesy of the Kenai Peninsula Borough, 4/03) View more at the Kenai Peninsula Borough GIS Web page.

The ZipMart Store – Sterling site was formerly operated as a fueling station beginning in 1985. Whittier Properties, Inc. owned and operated the facility from April 1990 to December 2000. A tank upgrade project in 1995 identified low level soil and groundwater contamination, but there was no evidence of a major release, and further action was not requested.

The ZipMart facility closed for business in 2000 and a subsequent release investigation was performed in 2001. During the investigation, contamination was identified in several soil borings and groundwater monitoring wells. Several of the monitoring wells had up to 13 inches of free product. Based on this investigation and fuel inventory records, it was estimated that 53,000 gallons of fuel released to the environment from a break in the tanks fill pipe. Whittier Properties investigated the extent of contamination in 2001; however, the extent of was too large and they were unable or unwilling to continue.

In 2002, DEC assumed the lead role in the site investigation and cleanup activities. As a result, numerous groundwater monitoring wells, product recovery wells, air-sprage wells, well points, and soil-gas probes have been installed at this site, which encompasses the former gas station property and properties adjacent to and down-gradient. Contamination generally migrated in a southeasterly direction from the source area. To date, the plume is over 3,000 feet long and 800 feet wide.

A free product recovery system was operated on the site between 2002 and 2005, resulting in the recovery of over 18,000 gallons of product. Following the free-phase product recovery effort, a soil vapor extraction (SVE) system was installed and began operation in the spring of 2005. In 2007, the SVE system was expanded to the east of the existing system to allow for a larger recovery area.

During the spring of 2009, an oxygen releasing compound (ORC) pilot study was completed to evaluate the effectiveness of injecting an oxygen source into the aquifer to enhance bioremediation at the down-gradient end of the contaminant plume.

In May 2009, the existing 20,000 gallon UST, associated fuel dispensers, and piping were removed. Approximately 774 tons of petroleum impacted soil were excavated from the vicinity of the UST system and transported to a local thermal treatment facility for disposal. A passive soil ventilation system was installed in the excavation backfill to facilitate removal of volatile compounds and enhance oxygen movement in the subsurface.

During the summer of 2011, ORC was injected in the down-gradient plume area to enhance natural attenuation to further mitigate the groundwater plume. From October 2010 to May 2013 the existing remediation system was expanded in the source area and also on the adjacent Sterling Baptist Church property to include air injection wells and additional vapor extraction (SVE) wells. The eastern system began continuous operation in May 2013. As of April 2015, the SVE systems have recovered about 11,658 gallons of gasoline vapor and 1,429 gallons of benzene vapor from the ground.

A "pump and treat" system has been used every summer since 2013 to remove contaminant mass from the perched aquifer at the source area. A feasibility study in 2015 consisted of injecting 40 pounds of leftover ORC into the shallow aquifer located east of the former UST excavation to reduce contaminant concentrations in the groundwater.

The primary health concern is the possibility of an existing or future drinking water well drawing groundwater contaminated with gasoline. Gasoline has many components, but when released to soil and water, it is typically measured as total gasoline range organics (GRO) and as a selected group of four compounds: benzene, toluene, ethylbenzene and xylenes. These four compounds are collectively termed BTEX. Of the four, benzene is most soluble in water and moves very rapidly.

Over 110 groundwater monitoring wells provide sample points to observe and track plume conditions. Current information indicates that the groundwater has been contaminated over a broad area, but it has not migrated to surface water. You can download a diagram of the extent of the plume in the More Information section. There are several drinking water wells in the area but to date only one was impacted above the State’s safe drinking water levels.

Due to the hydrogeologic conditions of this area and the nature of petroleum hydrocarbons in groundwater, the drinking water wells drawing from deeper points in the groundwater aquifer have not been impacted. The one well that was impacted is located in the shallower groundwater. Therefore, DEC recommends caution be employed when installing new drinking water wells in the area and recommends that property owners have water sampled for petroleum hydrocarbons, if you feel there may be a risk.

DEC will continue to monitor groundwater quality and sample the drinking water wells potentially at risk. Evaluation of future groundwater data will continue to guide decisions for future actions that may be required. Property owners in the area can pursue various options to respond to the possibility of contamination in existing wells. Available options include the use of a filtration system for their drinking water system and/or installing a replacement well that draws water from deeper in the aquifer.

Groundwater and drinking water wells in the area of the plume continue to be monitored to determine the risk to human health and to further define the extent of contamination. The remediation systems, which now include soil vapor extraction (SVE), air sparge and pump and treat, will continue to operate.