The Clean Air Act (CAA) requires the Environmental Protection Agency (EPA) to set National Ambient Air Quality Standards (NAAQS) for six specific criteria pollutants: ozone, particulate matter (PM), sulfur dioxide, nitrogen dioxide, lead and carbon monoxide. The CAA also requires EPA to review these standards every five years with advice from the Clean Air Scientific Advisory Committee. NAAQS revisions are based on the latest health research and science. The EPA has updated the PM2.5 NAAQS twice since it was initially established in 1997. Sampling for PM2.5 began in Fairbanks in 1999.

Surrounded by hills on three sides, Fairbanks is susceptible to temperature inversions which trap a layer of cold air close to the ground. Even a relatively small amount of pollution can be trapped near the ground for days or even weeks at a time. Pollution levels can increase as an inversion intensifies and then fluctuate as the inversion lessens in intensity. This leads to periods of poor air quality which can range from several hours to multiple consecutive days. Cold weather (below -10 or -15⁰ F) also increases the fine particulate matter (PM2.5) levels as inversions generally strengthen with increasing cold. Additionally, when it is colder, there is a need to increase burning of fuel oil, wood, coal, waste oil, or motor vehicle fuel which in turn produces more PM2.5 pollution. 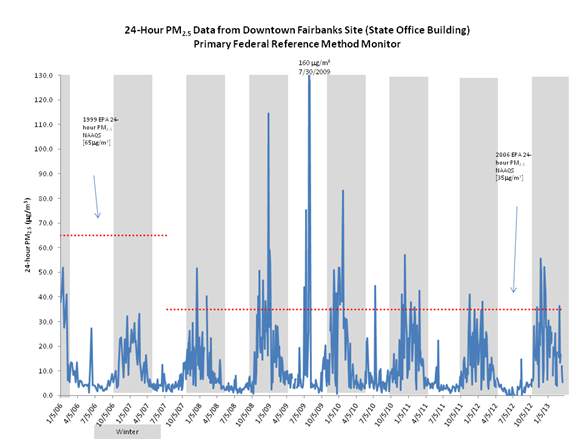 The chart above shows the PM2.5 concentrations recorded at the State Office Building site in downtown Fairbanks from January 2006 through December of 2012. The gray shaded bars depict the winter seasons, the red dotted horizontal line shows the level of the 24 hour National Ambient Air Quality Standard. As can be seen Fairbanks has been experiencing exceedances of the PM2.5 standard during the past 7 winter seasons. Additionally there were periods of poor air quality during the summers in 2009 and 2010 due to smoke from wild fires in the interior of Alaska.

The following bar graph shows the number of exceedance days recorded at the State Office Building (SOB) monitor in downtown Fairbanks. An exceedance means that a monitor measured a concentration that was above the 2006 NAAQS PM2.5 standard of 35 µg/m3 (micrograms per cubic meter). The monitored data shown in the graph comes from the FNSB’s SOB site primary federal reference monitor (FRM). The monitor collects a 24-hour sample every third day (blue). For a sampling frequency of every third day, the measured concentration on the sampling day represents the two days without measurement (red). So as a result, one exceedance counts as three for regulatory activities. The data used for this graph has been thoroughly reviewed and validated and thus is subject to regulatory activities. 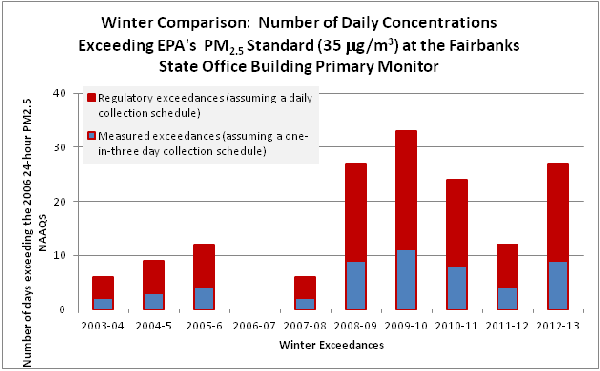