The U.S. Environmental Protection Agency (EPA) defines a "brownfield" as "real property, the expansion, redevelopment, or reuse of which may be complicated by the presence or potential presence of a hazardous substance, pollutant, or contamination." It’s been estimated that over 450,000 brownfields exist throughout the United States, ranging from large tracts of abandoned commercial and industrial corridors to former automotive repair shops to mom and pop dry cleaners. Historically, brownfields are the result of changing economic and development patterns, land use needs, or issues with property ownership. Depending on the site’s history and previous uses, certain contaminants may be present at the property, which can prescribe the cleanup activities and strategies, as well as inform the types of reuses that may be possible at the site.

Common types of brownfields in Alaska

Alaska’s urban areas have many of the same brownfield concerns as large urban centers in the rest of the country: former industrial sites, petroleum and chemical storage areas, abandoned commercial businesses, old gas stations, railroad yards, and many others. However, Alaskan rural communities have brownfields that are unique to their remote locations. Some of these sites include: 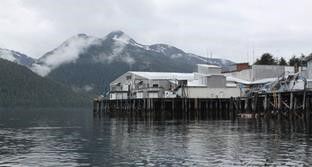 Very often, these brownfields may directly affect a subsistence resource or recreational area.

Contaminants are any physical, chemical, biological, or radiological substances that have an adverse effect on air, water, or soil. The contaminants most commonly found in Alaska are among those commonly found elsewhere in the U.S. and include petroleum, polychlorinated biphenyls (PCBs), solvents, asbestos, and metals, including lead, mercury, and arsenic.

Soil, water, and air contamination occur from a variety of sources and activities. Government, public, industrial, or commercial facilities, as well as households, can generate or use chemicals that cause contamination when improperly used. However, some chemicals considered contaminants occur naturally in the environment. Many metals, for example, are commonly found in soil.

Understanding a site’s background and previous activities can help instruct which contaminants may be present at the property.

Petroleum
Petroleum is the most common contaminant in Alaska. Alaskans use a wide variety of petroleum products, including gasoline, diesel fuel, heating oil, jet fuel, lubricating oil, bunker oil, and tar - all of which are refined from crude oil. Most petroleum contamination in Alaska comes from leaking storage tanks, containers, pipes, and equipment; transportation accidents; and improper handling and disposal practices that lead to spills.
PCBs
PCBs are a group of man-made chemicals made up of numerous chemical compounds that contain two or more chlorine atoms. The largest use of PCBs was in electrical transformers, switches, and capacitors (including fluorescent light ballasts) from about 1930 until 1977. PCB contamination in Alaska mainly occurred from leaky transformers or the improper disposal of PCB oil on the ground.
Solvents
Solvents are commonly used as degreasers, paint strippers, paint and lacquer thinners, and in dry cleaning by a wide variety of commercial and industrial facilities, and in households. Common solvents include acetone, toluene, xylene, kerosene, methylene chloride, tetrachloroethylene, ethanol, and methanol. Leaking tanks or containers, and improper disposal of solvents cause environmental contamination. Sources of contamination can include dry cleaners, paint shops, industrial plants, and auto and equipment repair shops.
Asbestos
Asbestos refers to a group of naturally-occurring minerals used in a wide variety of building materials and friction products. Asbestos is not hazardous if it remains undisturbed. However, if the material is disturbed and the fibers become airborne and are inhaled or ingested, they can cause lung and other cancers. Although some uses were restricted in 1980, asbestos can still be found in wallboard, flooring materials, roofing materials, mastics, thermal protection, and cement products.
Metals
Metals may be present as environmental contaminants in soil or water, as naturally occurring compounds or because of human activity. Lead from batteries, gasoline and paint; mercury from batteries and historical mining operations; arsenic from pesticides, agriculture, manufacturing, and wood preservatives; and silver from photographic processing all are common sources of metal contamination from human activities. 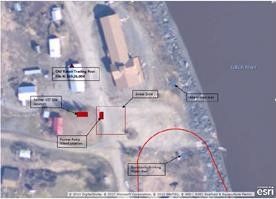 Aerial view of the Yukon Trading Post and wells in Circle, Alaska

Typical brownfields projects include the following steps from site identification through reuse and redevelopment. Depending upon the stage of the brownfields cleanup and reuse process, DEC can play a supporting role (for example, assisting in identifying potential properties) or in regulatory capacity (for example, approving work plans for site assessment and cleanup).

Site identification
Local stakeholders, municipalities, and tribes are often in the best position for identifying which sites may be most appropriate for a specific reuse based on the unique needs, drivers, and other factors of the local community.
Environmental Assessment
The site is investigated in terms of the property’s ownership history and use, previous activities, and documenting any known or suspected spills, releases, or disposal of petroleum or hazardous substances. In addition, the site is characterized and assessed based on field sampling and laboratory analyses, as appropriate, to determine what contaminants are present, at what concentrations, and whether cleanup is necessary.
Cleanup Options and Planning
Based on the results of the site assessment, a cleanup plan may be required to address any existing contamination on the property. One common approach for outlining potential cleanup options could be in an Analysis of Brownfields Cleanups Alternatives (ABCA), which is a requirement for projects that have received federal brownfields funding. If the site is being addressed pursuant to DEC’s Contaminated Sites Program, a Site Cleanup Work Plan would be submitted to DEC, which would describe who will do the work, how the site will be cleaned up, the sampling and analyses that will be conducted, among other details to ensure the site is cleaned up to the appropriate levels and by employing he appropriate methods.
Cleanup
How a site is cleaned up depends on a number of factors, including the source and extent of contamination, the threat to human health and the environment, and the intended reuse envisioned for the property. Common cleanup activities include:
Post-Cleanup and Reuse
Post-cleanup obligations depend upon the cleanup decisions made and the way the site is being reused. For example, some sites may require monitoring and ongoing engineered controls (for example, fencing) and institutional controls (for example, deed restrictions) to ensure the protection of human health and the environment. 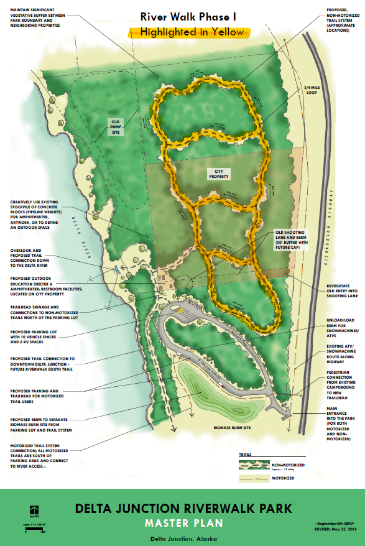 Design for Delta Junction Riverwalk Park. Formerly a shooting range, the site was assessed and cleaned up by both EPA and DEC. Cleanup was completed in 2020.

Reuse options for Alaska’s brownfields vary significantly depending upon their location (urban or rural) and the needs of the community. Some common reuses of Alaskan brownfields include: