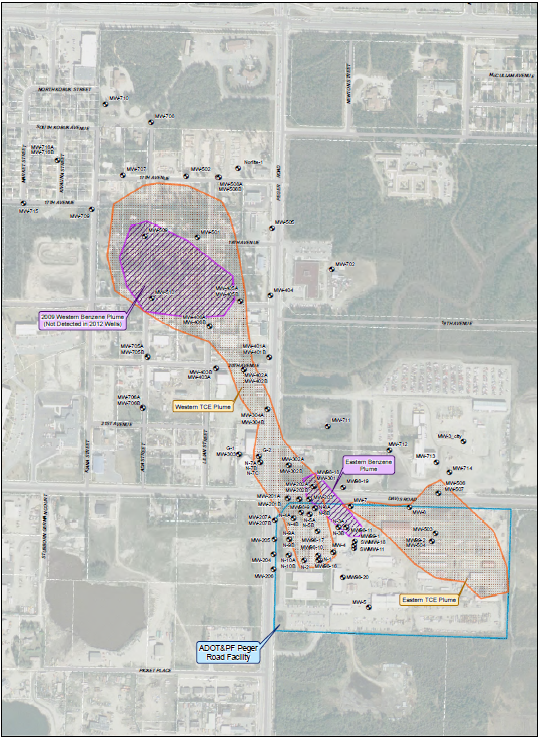 The map (above) shows the rough boundaries of the two TCE plumes and two benzene plumes. Three of the four plumes were drawn based on the results of 2012 well sampling. The fourth plume, the Western Benzene Plume, is based on the 2009 sampling results; in the 2012 sampling, the levels were below DEC’s cleanup level of 5 parts per billion. The areas inside all four plumes have samples from wells that came in above DEC’s cleanup level; the areas outside the plume boundaries had levels that were less than 5 parts per billion. (Map from Shannon & Wilson, Inc.)

This site has soil and groundwater contaminated with chlorinated solvents and petroleum associated with the Alaska Department of Transportation and Public Facilities (ADOT&PF) complex on Peger Road in Fairbanks. The contamination was first discovered in 1991 when an underground diesel storage tank was being decommissioned.

Four contaminated groundwater plumes have been observed at the site.

TCE is “reasonably anticipated to be a human carcinogen,” according to the federal Agency for Toxic Substances and Disease Registry (ATSDR), and the National Toxicology Program. It affects people’s health, even by breathing small amounts or drinking small amounts of water contaminated with TCE.

It’s unknown whether TCA causes cancer, or how breathing or swallowing it affects human health. But it affects animals that breathe or swallow it, causing damage to the liver, kidneys, blood, stomach and nervous system, according to the ATSDR.

The two other plumes, which are contaminated with petroleum, are benzene plumes. Benzene is a known carcinogen – it causes cancer in people and animals. It’s widely used in the Unites States, and is associated with fuel, such as gasoline.

Here is the current situation with contaminated groundwater plumes associated with the ADOT Peger Road facility:

What is vapor intrusion? 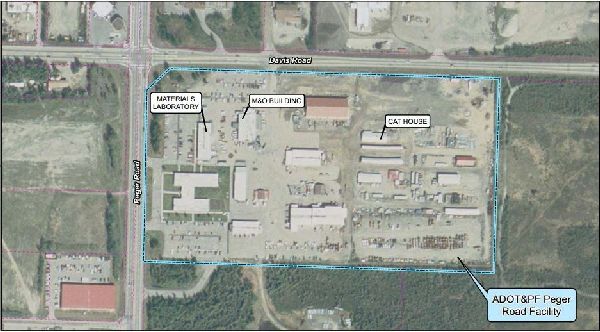 The above overhead view shows the Alaska Department of Transportation and Public Facilities complex, which is at the southeast corner of Peger and Davis roads in Fairbanks. (Map from Shannon & Wilson, Inc.)

Since the 2012 site investigations, additional private well monitoring and offsite evaluation of vapor intrusion risk was conducted in 2014-2015. An additional source/release location of solvent contamination in soil and groundwater was also delineated in 2016 near the eastern property boundary. Vapor intrusion risks were evaluated for buildings on the ADOT Peger Road Facility during 2017 and 2018. Results from these recent efforts are summarized below:

Additional assessment vapor intrusion at the Bride Shop is required to understand what is causing vapor intrusion and whether additional mitigation is warranted. Periodic monitoring of indoor air quality at the Traffic Operations Center and the Materials Laboratory will also continue.

DEC will continue to monitor groundwater quality throughout the plumes, and will also evaluate the monitored natural attenuation approach as a groundwater cleanup strategy.

DEC will also continue to coordinate investigative efforts with the various responsible parties of other contaminated sites in the area to determine if they are contributing to the area-wide groundwater contamination. 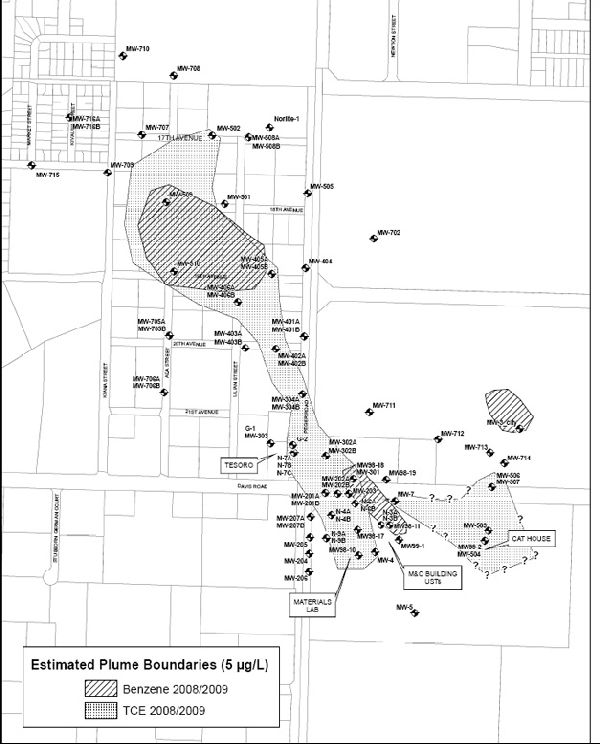 The estimated boundaries of the plumes are shown (above) as they were in June 2009. (Download in PDF) (Map from Shannon & Wilson) 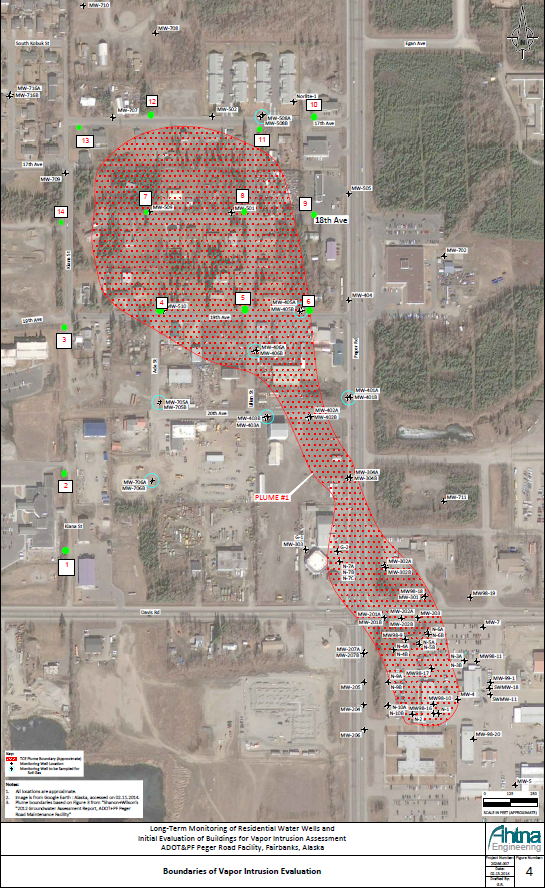 Historical background on the site, as well as more information about the contaminants, can be found in the following fact sheets and links: