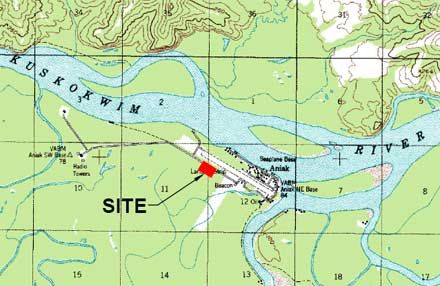 The site of the Joe Parent School building is marked in red, at the southwestern edge of the airport. State led cleanup is contingent on available state funds.

Aniak, pop. 501, is located on the south bank of the Kuskokwim River at the head of Aniak Slough in the Yukon-Kuskokwim Delta. Aniak lies 92 air miles northeast of Bethel and 317 miles west of Anchorage.

The site was initially developed and used by the Air Force in the 1950s in the military/civilian White Alice Communication System (WACS) during the Cold War. By the late 1970s the military facility was obsolete and was turned over to the Kuspuk School District, which renovated the main building and has used it as a school since 1983. The Alaska Department of Transportation and Public Facilities has owned the property since 1965 and leases the site to the Kuspuk School District and ALASCOM, Inc.

During White Alice operations and renovation of the school by contractors, fluids containing polychlorinated biphenyls (PCBs) were spilled in and around the generator room and onto the ground outside the building, resulting in soil contamination. Hazardous materials were placed into drums that were moved to various locations on the property, where additional spills reportedly occurred. Most of those drums were ultimately shipped to a disposal facility out of state.

The U.S. Air Force and Alaska Department of Environmental Conservation conducted PCB cleanup at the site between 1979 and 1983 and attempted to remove all PCB-contaminated material and soil containing more than 50 parts per million (ppm) PCBs. Roughly 80 tons of PCB-contaminated soil were excavated and shipped to a permitted disposal site, along with numerous drums of other wastes. In 1981, a sealant was applied to the floor of the former generator room. In later years, the generator room was used as a wood shop, and a better sealant was added to the floor in 1983. 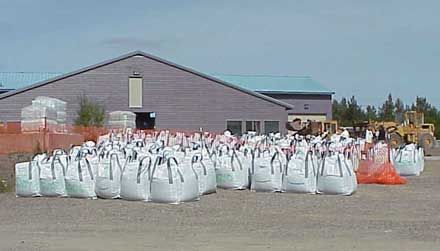 Also in 1983, DEC conducted environmental sampling and tested water from the well at the site and from several homes in Aniak. None of the water well samples contained PCBs. That same year, the State Epidemiologist conducted an investigation, interviewing seven workers in the White Alice site, four of whom had also been involved in the building renovation. PCB levels in blood samples from workers who had been exposed to PCB oil and other materials at the site were within the range considered normal. (See the 1983 report below.)

In 1994, DEC was notified of additional drums and possible contamination at the site. DEC staff inspected the site in 1996 and observed about 60 drums in alders between the former WACS building, now the Joe Parent School building, and the airport runway. The U.S. Army Corps of Engineers tested the ground beneath the drums and documented petroleum contamination. Since the land was used but no longer owned by the military, the Army Corps of Engineers assumed responsibility for the military's portion of the contamination under the “Formerly Used Defense Site Program.”

In 1997, the U.S. Environmental Protection Agency (EPA) released a report that showed PCBs remained in soil outside the school wood shop. Subsequent sampling inside the school documented that PCBs had been tracked into the building. With DEC oversight, the Corps’ contractors cleaned the inside of the Joe Parent School building and covered PCB-contaminated soil outside the school with a temporary liner and 6 inches of clean soil. The cover was put in place to ensure that people would not come in direct contact with contaminated soil and to prevent the tracking of PCBs into the school or other areas. DEC mailed several fact sheets to all Aniak post office box holders in 1997 and 1998 to inform the community of the investigation and cleanup efforts. A public meeting was held in Aniak in January 1998 to discuss the issues and answer questions.

A health study in 1998 tested some of the school's students, faculty and maintenance staff. The data showed that students and faculty involved in the tests did not have any measurable levels of PCB in their blood serum. Serum samples from some of the cleanup workers and maintenance staff contained detectable PCB levels; however, they were found to be within commonly observed levels for Americans and were far below levels that have been shown to have toxic effects. The report concluded that residents have not been exposed to harmful levels of PCBs at the site, but that PCBs should still be cleaned up to appropriate levels. The results were summarized in a Health Consultation report that the U.S. Agency for Toxic Substances and Disease Registry issued in 1999. (See report below.) 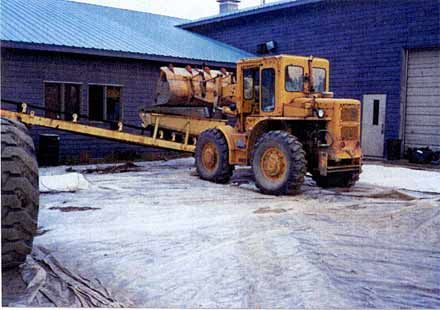 The excavation and removal of PCB-contaminated soil is shown outside the Joe Parent School building in 2001. (Shannon and Wilson photo)

Since 1998, DEC has been working with the potentially responsible parties (PRPs) for contamination at the site. The PRPs include the federal government, the State of Alaska (as the landowner), the Kuspuk School District, and, since 2004, the Air Force contractors that operated the White Alice site. However, due to disagreement between the PRPs on how to fund and who should conduct the necessary site characterization and cleanup, work has been delayed. Because the site is used as a school and due to community concerns, DEC has taken the lead on several additional steps to characterize and clean up the contamination.

Between 1998 and 2001, DEC hired contractors to better characterize the extent and location of remaining PCB contamination adjacent to the wood shop and to clean up a portion of the site. Roughly 870 tons of PCB-contaminated soil were excavated and shipped off-site for disposal. The PCB-contaminated soil that remained in the area was under the temporary cap (a liner and clean soil); therefore, there was no current exposure to it. (See report below, “PCB Cleanup, Aniak Middle School,” Shannon and Wilson, December 2001.)

In 2002 and 2003, DEC hired a contractor to complete a feasibility study to evaluate seven different alternatives for completing the cleanup. Excavation and off-site disposal of soil containing more than 1 ppm PCBs was recommended as the best overall alternative when considering regulatory compliance, protection of human health and safety, implementability, effectiveness and cost. (See report below, “Feasibility Study for Treating PCB-Impacted Soil,” January 2004.)

The PRPs responded by requesting the State of Alaska to provide time for them to conduct a separate feasibility study, as they did not concur with the existing one. The State allowed the extra time. URS Corporation, under contract with the private PRPs, completed a separate feasibility study report. That report recommended excavation and off-site disposal of soil with PCBs greater than 10 ppm, capping all soil where PCBs remain at concentrations between 1 and 10 ppm, and development of institutional controls to ensure the cap is maintained indefinitely. 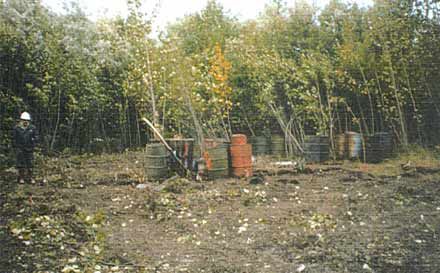 Drums on the site as they appeared before the U.S. Army Corps of Engineers removed them in August 1998.

In October 2006, DEC's contractor sampled the contents of the former WACS septic system, soil around the septic system and soil near a former drum storage area. The results showed concentrations of PCBs, arsenic, chromium and trichloroethylene (TCE) above cleanup levels in the septic system and in soil, thus expanding the area of concern and contaminants that warrant cleanup. (See report belowSee report below, “Septic System and Area F Characterization,” May 2007.)

In 2008, DEC hired a contractor to complete the PCB cleanup work and further characterize the source and extent of TCE contamination. The cleanup objectives were to remove all soil containing more than 1 ppm PCBs and related cleanup wastes to a permitted disposal facility in the Pacific Northwest. The results:

In 2009, DEC contracted the response actions listed below. 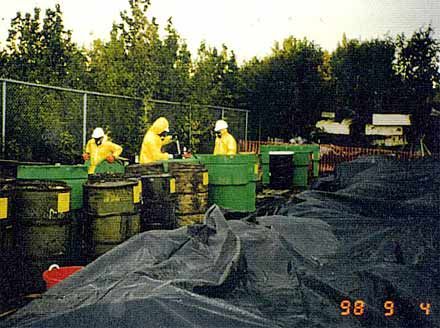 Workers prepare drums during a U.S. Army Corps of Engineers' removal in August 1998.

In the fall of 2009, contractors that had operated the WACS for the Air Force purchased and shipped 26 indoor air purification filters to the Kuspuk School District in Aniak for use in the Joe Parent School building. The school district installed the filters and has been operating them.

In 2010, DEC contracted to have a sub-slab depressurization system designed, constructed and installed at the Joe Parent School building. The system began operating in September 2010 and DEC continued to operate it through 2012. Quarterly Vapor Intrusion Mitigation Operations, Maintenance and Monitoring reports were prepared. Here’s what happened:

During 2011, DEC contracted to have a Groundwater Feasibility Study conducted to further evaluate cleanup alternatives for TCE-contaminated groundwater. The report was finalized in June 2012 and concluded:

Early in 2012, DEC informed the Kuspuk School District and other PRPs that DEC would not continue to fund the operation and monitoring of the sub-slab depressurization system, ongoing air monitoring or the remaining TCE and PCB cleanup work, and that the PRP group needs to pay for and conduct those activities along with reimbursing DEC for all prior expenses. DEC has expended nearly $7 million on characterization and cleanup work at the site to date.

DEC conducted its final operations and maintenance work and air monitoring in May 2012 and continued to pay for operation of the depressurization system through the end of 2012.

In September 2013, the PRP group finalized an interim agreement on operating, maintaining and monitoring the vapor intrusion mitigation system. The school district contracted to have a workplan developed and implemented. DEC approved the workplan on Oct. 7, 2013. The vapor mitigation system was effective at reducing TCE vapors to below ADEC target levels and continues to operate effectively.

The PCB soil cleanup effort was conducted in 2017 and included the excavation and out-of-state disposal of over 2,800 cubic yards of soil containing PCBs greater than 1 mg/kg. Soil samples collected from the excavation did not contain PCBs above 1 mg/kg except in two samples which contained PCBs at 5.28 mg/kg and 5.63 mg/kg. These areas could not be excavated further due to the presence of the JPVEC, but will be removed when the building is demolished.

The Remedial Investigation (RI) of TCE was completed in 2018 followed by the Feasibility Study (FS). The RI successfully delineated the extent of TCE contamination in soil. The delineation of TCE in groundwater is nearly complete however one or more additional monitoring wells will be needed for long-term groundwater monitoring.

The FS evaluated several remedial options including No Action, Institutional Controls (ICs) and Engineering Controls (ECs), Soil Vapor Extraction, Long Term Groundwater Monitoring, Excavation, or various combinations of these options. The recommended remedial alternative is Targeted Soil Vapor Extraction with limited ICs and ECs. The RI and FS Reports were approved by ADEC in April 2019 and it is anticipated that the recommended alternative will be implemented in 2019 or 2020. 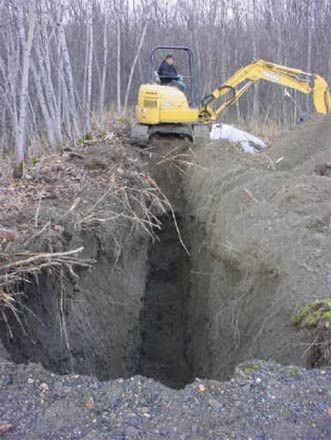 A septic trench is dug in Aniak in October 2006 to allow for sampling. The trench was backfilled after sampling.

Polychlorinated biphenyls (PCBs) and trichloroethylene (TCE) are the primary contaminants of concern at the site.

PCBs are stable, heat tolerant materials that were added to electrical transformer oils to extend the time that the oil was usable. PCBs were also used in other materials including other electrical equipment, some caulk, paints, sealants and hydraulic fluids. In the late 1970s, manufacture and use of PCBs in new products was banned in the United States in response to concern over possible health and environmental effects.

TCE is a nonflammable, colorless liquid with a somewhat sweet odor and a sweet, burning taste. It is used mainly as a solvent to remove grease from metal, but it is also an ingredient in adhesives, paint removers, typewriter correction fluids and spot removers.

Potential health effects from exposure to TCE include:

Potential health effects from exposure to PCBs include:

Both TCE and PCBs are considered to be probable carcinogens.

See the U.S. Agency for Toxic Substances and Disease Registry's fact sheets for more information on PCBs and TCE.