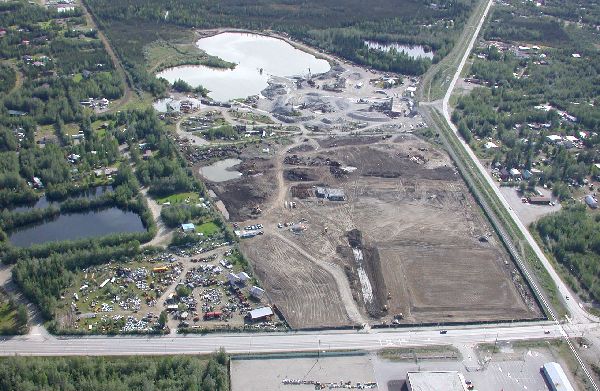 Aerial photo taken in the summer of 2003, with Badger Road in the foreground and the Old Richardson Highway at the far right. The site is outlined in yellow. Potentially dangerous ordnance and explosive waste was removed along with thousands of tons of scrap metal and tires. Approximately 140 cubic yards of accumulated hazardous waste and numerous drums of other hazardous material were shipped to an out-of-state permitted disposal facility. The lower right portion of the site is the landfill, containing stabilized PCB- and lead-contaminated soil, capped with a geosynthetic membrane and asphalt to seal in the contamination. (The asphalt was applied after this photo was taken). The site is now deemed safe for commercial/industrial land use development with restrictions to prevent use of the groundwater for drinking purposes and damage to the sealed containment area. (DLA photo, 8/03)

With State concurrence, Arctic Surplus was removed from the Environmental Protection Agency's Superfund priority list on September 27, 2006. DEC has now transitioned the site into conditional closure status. Active cleanup has been completed while periodic monitoring of the groundwater will continue. For the future, a combination of land use restrictions and institutional controls will protect people from exposure to the remaining contamination, and the land can be used for commercial and industrial uses. DEC will work with the landowners and potential developers of the site to ensure controls are maintained. DEC will also continue to review groundwater monitoring reports. To date, groundwater monitoring has demonstrated groundwater is stable and contamination is either non detectable or well below levels of concern.

The former Arctic Surplus Salvage Yard is located in Fairbanks North Star Borough, Alaska, approximately five miles southeast of Fairbanks. The site consists of several land parcels, occupies 24.5 acres and is bounded on the south by the Alaska Railroad and the Old Richardson Highway, on the west by Badger Road, on the north by private residences, and on the east by the a sand and gravel quarry. The western portion of the site was owned and operated as a municipal landfill by the Department of Defense from 1944 to 1956. In 1957, the landfill was covered with ash from a coal-fired power plant at the nearby Ladd Field (now Fort Wainwright) and the property sold. From 1959 to 1989, it was privately-owned and operated as a salvage yard for recycling, storing, and disposing of military surplus goods.

In 1986, two representatives from the Army visited the site in response to a complaint about stored waste material with military markings. DEC conducted a preliminary assessment in 1987 and a site investigation in 1989. The site was subsequently included on the Superfund National Priorities List of contaminated sites in 1990. 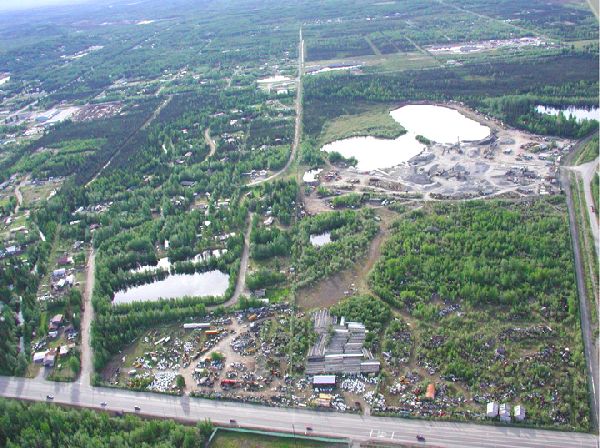 The cleanup process used is spelled out in the federal Comprehensive Environmental Response, Compensation, and Liability Act (CERCLA). The federal Defense Logistics Agency (DLA) paid for and conducted the cleanup since they are the only responsible party that is financially viable. Two other parties have been involved with the cleanup: the U.S. Environmental Protection Agency (EPA) to ensure that cleanup meets federal standards, and the Alaska Department of Environmental Conservation (DEC) to ensure that cleanup is conducted in accordance with state regulations.

Between 1989 and 1991, EPA and DLA installed a fence around the entire site to control access to contaminated areas. They removed approximately 22,000 pounds of asbestos, 75 gallons of chlordane, and numerous waste drums, lead battery casings, and transformers containing oils with polychlorinated biphenyls (PCBs). In 1992 and 1993, the DLA conducted a subsequent remedial investigation and feasibility study (RI/FS). During the same time, the Alaska Department of Transportation (ADOT) cleaned up the Badger Road right-of-way adjacent to the site as part of the Badger Road improvement project. Both projects were completed by 1994. In 1995, EPA sought public comment on a proposed plan and documented the selection of a final remedy for the site in a record of decision (for more information, see links below). The State of Alaska agreed with this remedy. 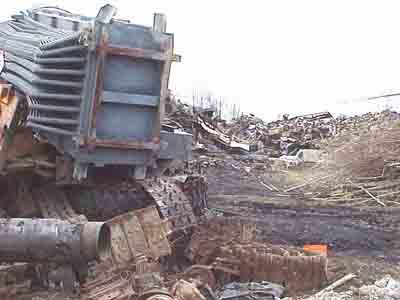 A remedial investigation and a subsequent human health assessment conducted by the federal Agency for Toxic Substances Disease Registry were completed in 1999, both indicating little likelihood of hazardous substances migrating through groundwater or any other means off of the Arctic Surplus site. Therefore, cleanup of the site was not a top priority for DLA. However, in 2002 funding was secured by DLA for cleanup of Arctic Surplus. Before cleanup of contaminated soil began, the site was cleared of salvaged items, including thousands of potentially dangerous ordnance and explosive waste (OEW). This OEW included spent shell casings and various training ordnance. Each of these items needed to be inspected to ensure that live or partially fired ordnance was not inadvertently surplused by the military.

Several fact sheets were released and public meetings were held during the initial site investigation and the development of the record of decision in the mid-1990s. In the fall of 2002, the DLA published a fact sheet describing the current status of the site (PDF). A public meeting was held in Fairbanks in July 2003. A post-cleanup meeting was held in Fairbanks in June 2004. 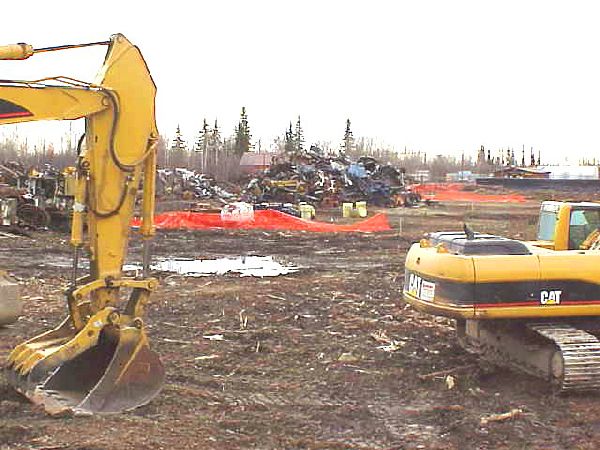 Soils at the site have been cleaned up to levels that are safe for industrial and commercial use as long as water from the site is not used for drinking and the cap over the landfill area is not disturbed.

The site once contained a wide range of contaminants, including inorganic compounds, semi-volatile and volatile organic compounds, polychlorinated biphenyls (PCBs), chlorinated pesticides, dioxins and furans. With the exception of lead and PCBs, these contaminants were present in isolated areas of the site or at relatively low concentrations at the site.

Lead from battery processing and PCBs from salvaged transformers were the main contaminants of concern because of their widespread occurrence at relatively high concentrations in surface soils across the site. Site groundwater may contain trichloroethylene (TCE) at concentrations exceeding the drinking water standard, however, TCE originating from contamination at Arctic Surplus has not been detected in wells off the property. Groundwater sampling will continue at the site for years to ensure that contaminants do not leave the property. 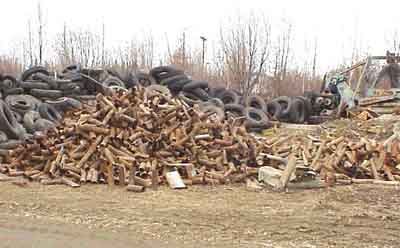 An analysis of the risk to human health (see more about risk assessments) indicates that lead and PCBs pose a threat to human health. Analysis of the risk to the environment, including plants and animals indicates that contaminant concentrations in site soils and surface water have not impacted the environment. The principal human health threats posed by site contamination are: (1) direct contact with contaminants in surface soils, primarily lead and PCBs; and (2) leaching and contamination of groundwater which serves as a principal source of drinking water for the region.

Cleanup goals for other site contaminants were not developed, since the presence of these contaminants does not impact the health and environmental risks presented by the overall site. The groundwater cleanup standards are set in state law as maximum contaminant levels (MCLs) at the site boundary. Groundwater will be monitored to determine if source control measures for soils are meeting the goals or if further action is needed. 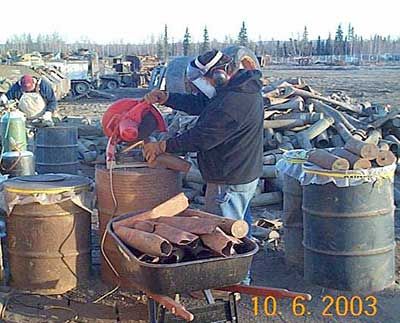 The former Arctic Surplus site is now available for industrial use for the first time since 1989. The site is restricted to industrial/commercial use to prevent people from coming into contact with remaining low-level contaminated soil, and restrictions are also in place to keep people from drinking potentially contaminated water.

Here is a summary of the terms of the final cleanup: 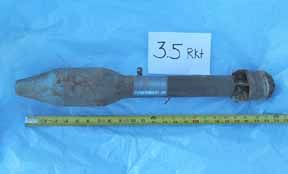 Training rockets like this one do not contain explosives, but the rocket motors had to be inspected for hazardous propellant. (DLA photo, 10/02)

The site owners signed institutional controls and deed restrictions in May of 2004. Final remediation cost $10 million, and the total spent at the site was $23.5 million. Long-term monitoring of 8 wells is required to verify that the soil stabilization process is successful in preventing leaching of contaminants from the stabilized soil. Biannual inspection of the cap is also required to ensure there is no use of groundwater or soil under the cap and that it remains impermeable to precipitation.

A procedural note: Field work and further investigation revealed that an amendment to the Record of Decision was not needed, therefore a Proposed Plan was also not needed. These findings and the current status are summarized in a document called the Explanation of Significant Differences (PDF 44K) which explains minor changes to the Record of Decision of September 1995

This anti-tank mine was designed for training purposes. It did not contain high explosives, however, some training mines did contain a small explosive charge used to simulate detonation. (DLA photo, 10/02) 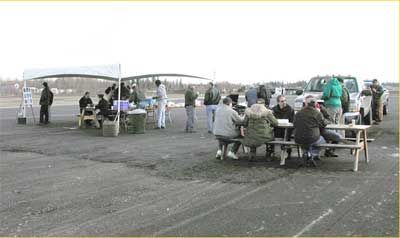 The landfill has been capped with a geosynthetic clay liner, highly impermeable during freeze-thaw cycles. This picnic celebrated the conclusion of cleanup activities in 2004.