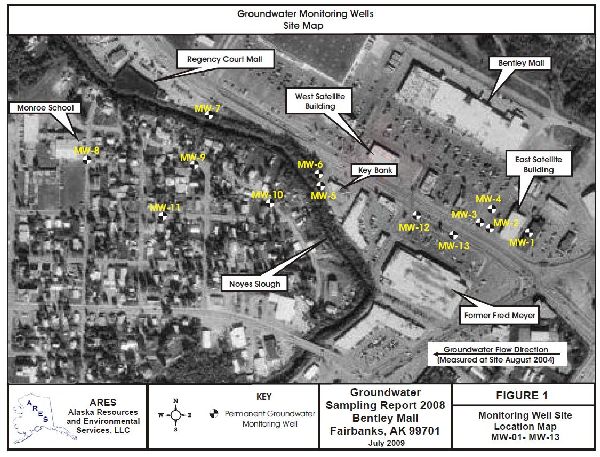 The general location of the areas of land called Bentley Trust Tax Lots 201 and 203 is north of the City of Fairbanks. The city is shown in red.

This contaminated site is the result of apparent releases of dry cleaning fluid (perchloroethylene, or PCE) from a dry cleaner formerly located at the Bentley Mall East Satellite Building (see Figure 1) that was in operation from 1979 to 1983. Soil and groundwater have been contaminated with PCE both at the source property as well as off property to the west-southwest, the primary direction of groundwater flow in this area.

The owners of the mall (formerly the Bentley Mall, LLC, and and currently KE Bentley One LLC and KGC Bentley Two LLC of San Francisco, California) have worked cooperatively with the Alaska Department of Environmental Conservation (DEC) since 2002 in performing environmental assessments.

Results from assessments performed from 2003 to 2005 indicated that a PCE-contaminated groundwater plume extends off-site to the west-southwest, towards Noyes Slough and the Charles Slater residential subdivision. Figure 2 depicts our current understanding of the extent of the groundwater plume. A Record of Decision was signed in 2007 for the Bentley Mall East Satellite Building that called for the operation of an air-sparge and soil vapor extraction groundwater cleanup system. Concentrations of PCE in groundwater steadily declined through 2011, when DEC approved the shut-down of the soil and groundwater treatment system.

PCE vapors migrating into the East Satellite Building and other nearby buildings are mitigated by operating the air handling system in the buildings to induce continuous positive pressure. Additionally, an application of RetroCoat™ (a commercial vapor barrier product) was recently applied to the East Satellite Building interior to permanently seal the foundation from intruding vapors. Groundwater and indoor air continue to be sampled at the site to monitor the groundwater plume and insure the protection of occupants in the affected buildings.

Due to increased scientific understanding in recent years of the vapor intrusion exposure pathway over large, dilute groundwater plumes, an assessment of contaminant soil vapors in down-gradient portions of the groundwater plume in the Charles Slater subdivision has been ongoing since 2010.

Perchloroethylene, or PCE – a common dry cleaning solvent - has contaminated the soil and groundwater. A contaminated groundwater plume containing PCE and its breakdown products, (trichloroethylene and dichloroethylene, or TCE and DCE) extends off-site to the west-southwest, towards Noyes Slough and the Charles Slater residential subdivision. Although no drinking water wells have been identified within the plume, irrigation wells are known to exist in the neighborhood. The Charles Slater Subdivision is provided with drinking water by Golden Heart Utilities, and a City of Fairbanks ordinance does not allow private drinking water wells when drinking water is provided by the Utility.

Contaminant soil vapors are present in the up-gradient portion of the groundwater plume, near the contaminant release locations, but vapor intrusion has been mitigated in nearby buildings. Contaminant soil vapors are also present in the down-gradient portions of the groundwater plume, but the limited sampling conducted to date has not yet identified a risk to building occupants in the Charles Slater subdivision. 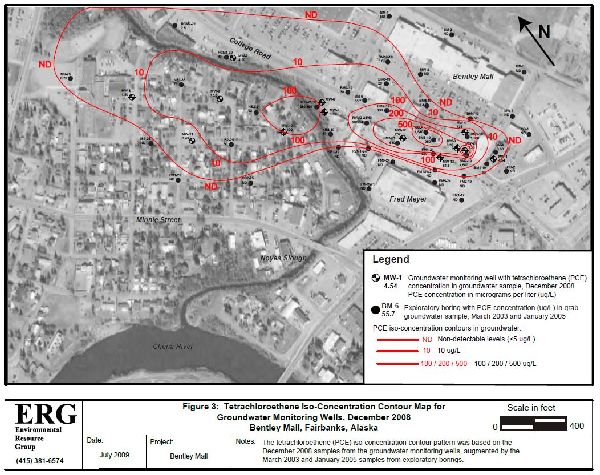 Additional vapor intrusion assessment is currently underway to understand if vapors could impact occupants of buildings in the Charles Slater subdivision.

The owners of the Bentley Mall complex will continue to monitor contaminant concentrations in groundwater monitoring wells, and in affected buildings.

ADEC will continue to coordinate investigative efforts with the various responsible parties (RPs) in the area to determine if they are contributing to the area-wide groundwater contamination.

Historical background information can be found in the June 2004 fact sheet update and the 2007 Record of Decision, found on the links below. 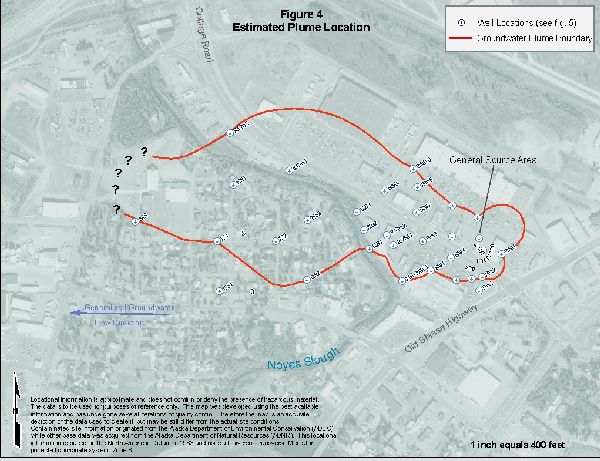 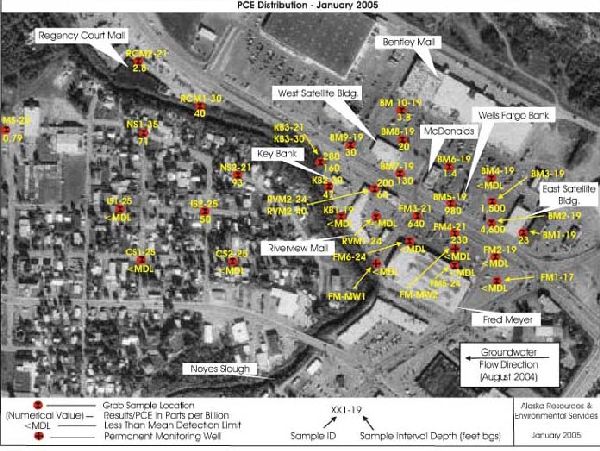