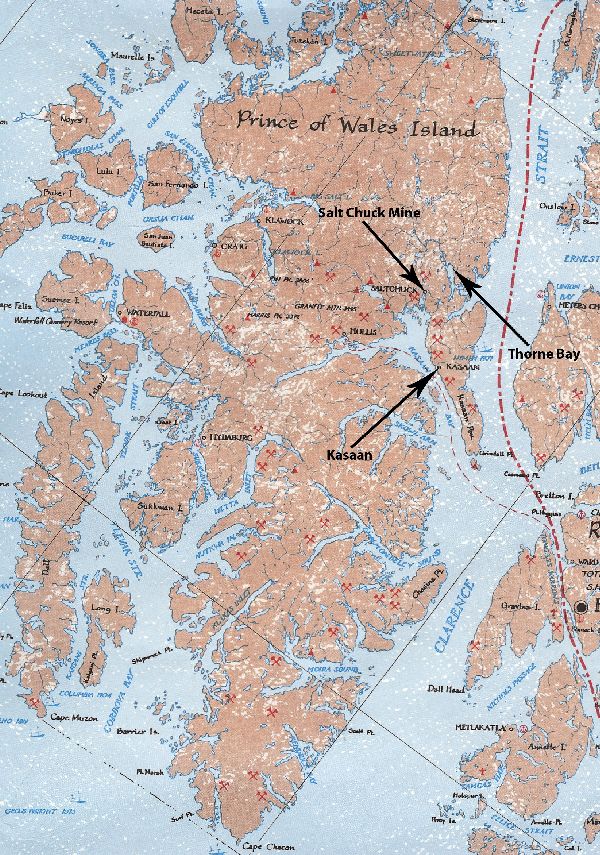 The Salt Chuck Mine is on Prince of Wales Island in the Tongass National Forest and at the northern end of Kasaan Bay. The mill area is near the mouth of Lake Ellen Creek on the northern shore of Salt Chuck Bay, a smaller bay off Kasaan Bay. Thorne Bay (pop. 508) and Kasaan (pop. 69) are nearby communities. (Map by and courtesy of the Sobay Company of Olympia, Wash.)

The Salt Chuck Mine is an abandoned historic gold, silver, copper and palladium mine on the southeast side of Prince of Wales Island. The site is 4½ miles from Thorne Bay, and is accessible by road, or by water.

The mine and mill operated from 1905 to 1941, processing more than 326,000 tons of ore. The mine openings are about a half mile uphill from the mill area, which is on the northern shore of Salt Chuck Bay near the mouth of Lake Ellen Creek. The remnants of at least 25 of the mill's structures are on the site.

As with other abandoned historic mines, the sources of contamination at the mill area are a result of standard practices from an era before environmental regulations, when mines operated
without today's permits and reclamation requirements.

The Alaska Department of Natural Resource's Prince of Wales Area Plan identifies the area around the site as “intensive public recreation use.” The Forest Service has public-use cabins and a campground in the area, and Salt Chuck Bay is used for subsistence clamming and crabbing. Lake Ellen Creek supports five species of anadromous fish.

The U.S. Bureau of Land Management first investigated the Salt Chuck Mine's mill from 1995 to 1998. Those investigations led to a more in-depth one conducted by the Forest Service from 2002 to 2007. The Forest Service's Engineering Evaluation/Cost Analysis, which it finalized in 2010, summarized the previous sampling results.

In 2007, the DEC, Alaska Department of Health and Social Services (DHSS) and U.S. Environmental Protection Agency (EPA) reviewed the Forest Service's draft Engineering Evaluation/Cost Analysis. All three reviewing agencies agreed that the site needed additional site characterization, that all the ways people and the environment might be exposed to contamination needed to be evaluated, and that there needed to be an assessment of those exposure risks. The three agencies agreed that the additional work would provide the basis for cleanup levels that would sufficiently protect multiple uses of the land in the future. 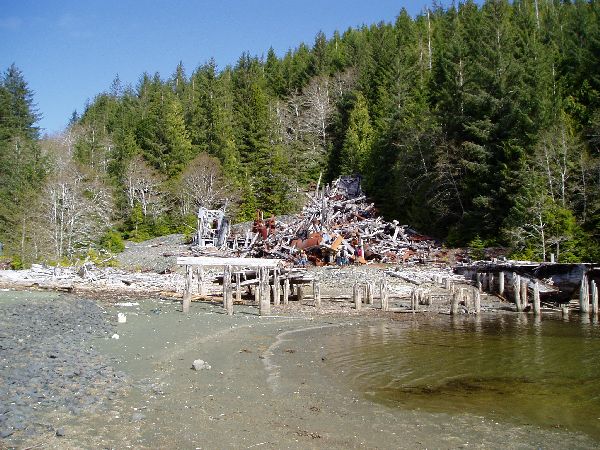 The mill area is shown in May 2009 (above). The mine openings are about a half mile uphill from the mill area. The contaminants from the Salt Chuck Mine include polychlorinated biphenyls (PCBs), copper, lead, mercury, selenium, vanadium, nickel, arsenic, petroleum and polycyclic aromatic hydrocarbons. (DEC photo)

In the spring of 2009, DEC conducted an informal sounding of public opinion about resolving lingering contamination issues and the delayed cleanup progress by giving the site Superfund status through placement on the EPA's National Priorities List. In July 2009, DEC's Commissioner Larry Hartig sent a letter on behalf of Gov. Sarah Palin to the EPA saying the state did not object to the site being placed on the National Priorities List. The EPA held a public comment period on the proposed listing.

On March 2, 2010, the EPA announced it had added the Salt Chuck Mine site to its National Priorities List. The listing makes the site eligible to receive federal funds for long-term cleanup while the EPA seeks to recover costs from the responsible parties. Community involvement and tribal participation are also an important part of the EPA's Superfund cleanup process. Background information on the Salt Chuck Mine site and other documentation is available on EPA's website for the mine.

In 2011, the Forest Service used funding from the American Recovery and Reinvestment Act, along with additional funding, to conduct a non-time critical removal action on the uplands. The Forest Service built a short road to provide access to the site, removed building debris, drums and tanks, excavated roughly 5,400 cubic yards of petroleum-contaminated soil and metals-contaminated tailings, and disposed of the excavated material in a permitted landfill out of state. The EPA collected soil, sediment, water and biota samples at the site in 2011 and 2012. Those samples will be used in the Remedial Investigation Report and Risk Assessment Report. 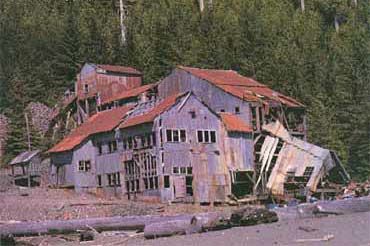 The mill at the Salt Chuck Mine is shown in a photo taken in the mid-1970s (above). (Photo by Patricia Roppel, courtesy of the U.S. Forest Service)

(Screening criteria or levels are risk-based levels that are used initially at a site before site-specific data is available; the levels are very conservative because there are so many unknowns about the site. Once that data is collected (such as in a risk assessment), the responsible party will propose cleanup levels that use the site-specific information. DEC reviews and approves the cleanup levels – the levels that must be achieved to protect human health and the environment.) 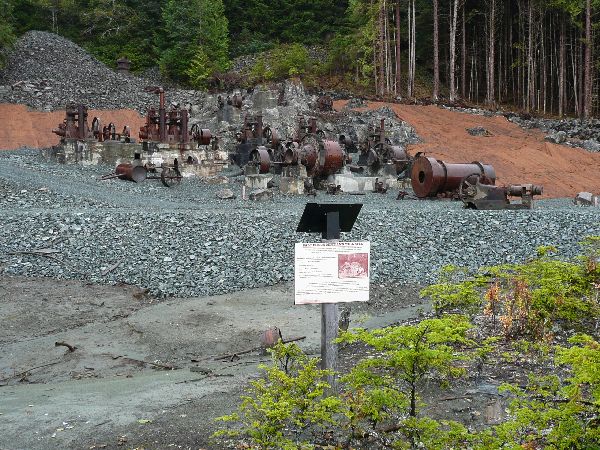 The site's historical mining equipment is now collected in one area, as shown in this October 2011 photo (above). (Photo courtesy of the U.S. Forest Service) 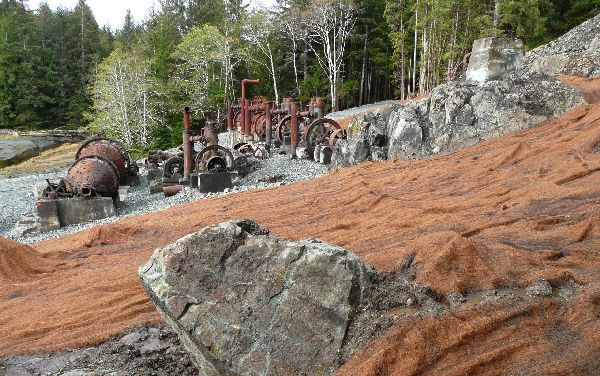 The U.S. Forest Service built a short road to provide access to the site in 2011, removed building debris, drums and tanks, excavated roughly 5,400 cubic yards of petroleum-contaminated soil and metals-contaminated tailings – 8,400 tons of contaminated material, which filled 300 containers averaging 28 tons per load. The material will go to a permitted landfill out of state. The agency set aside the site's historical mining equipment during the excavation, then grouped it in one area, as shown in the photos taken in October 2011 photos (top and bottom). (Photos courtesy of the U.S. Forest Service) 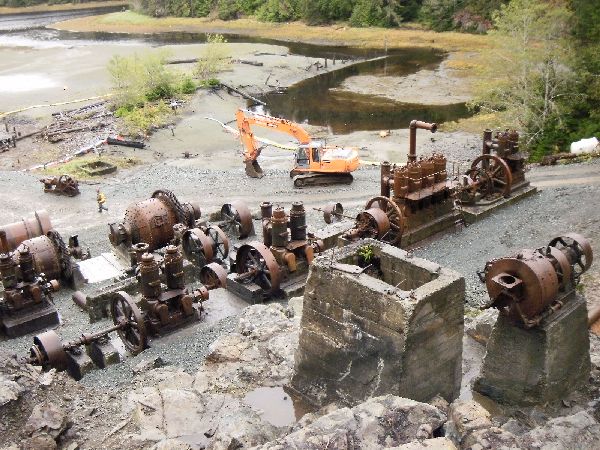 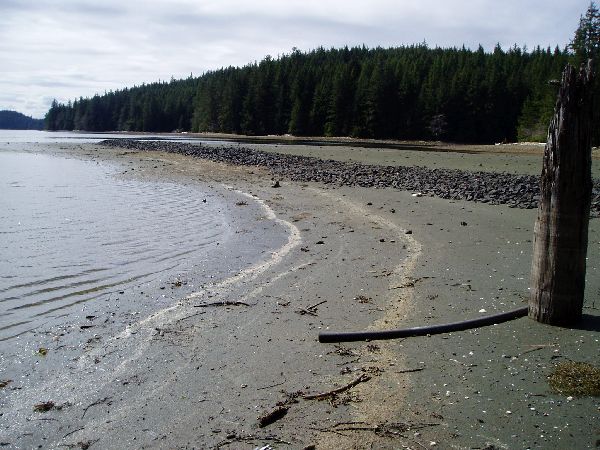 The line of brown rocks and all the sediment on the nearby beach (above) are metals-contaminated tailings. The beach is near the mill area, on Salt Chuck Bay, and the photo was taken in May 2009. The main contaminants of concern in the intertidal area are copper, arsenic and vanadium. (DEC photo)

Petroleum hydrocarbons were also found in the tailings near the former mill and are likely from historical releases. Tailings were collected from multiple locations within Salt Chuck Bay for bioassay analyses – where the laboratory monitors if polychaetes and bivalves (marine worms, and mollusks, such as clams and cockles) survive in that sediment. The tailings closest to the mill have the greatest toxicity; the polychaetes and bivalves from that area did not survive in the laboratory tests.

In general, the contaminant levels decreased as the sample locations extended into Salt Chuck Bay. The surface water of the bay showed levels of copper, cobalt, manganese and iron that are greater than the screening levels.

Butter clams, little neck clams, softshell clams and cockles were collected and the tissue was analyzed for metals. Elevated concentrations of arsenic, copper, and vanadium were found in the tissue. 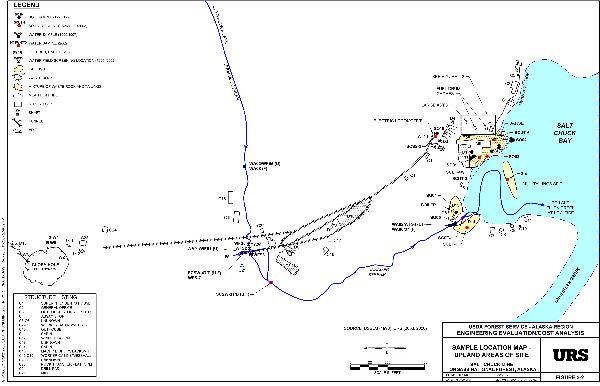 The layout of the Salt Chuck Mine is shown on this March 2007 map. (Map courtesy of the U.S. Forest Service) 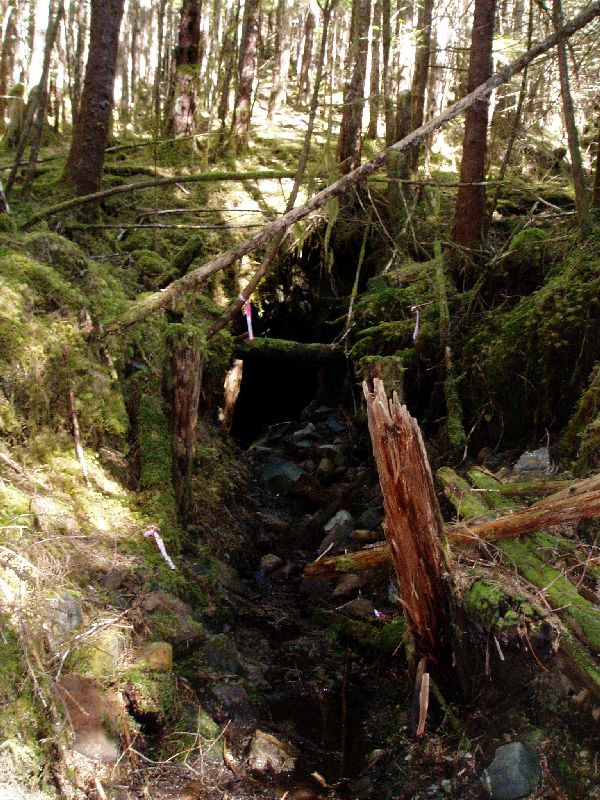 One of the main adits to the mine is shown in this May 2009 photo (above); the adit looked similar in the summer of 2011. An adit is a nearly horizontal passage from the surface to a mine. (DEC photo)

In February 2013, DEC met with the EPA, Forest Service, DNR, Alaska Department of Fish and Game, U.S. Fish & Wildlife Service, and the DHSS. During the meeting, the EPA presented the sampling results from 2011 and 2012, and the agencies discussed data that would need to be collected in 2013. In May, the EPA collected those samples. The results, and the results of previous sampling events, will be evaluated and a comprehensive Remedial Investigation Report will be completed this winter (2014). The EPA will also complete a Risk Assessment that will calculate health risks from using the site, to both human and ecological receptors.

The EPA held public meetings in Thorne Bay and Kasaan in May.

In May and August, the EPA also conducted a treatability study in the inter-tidal area to determine if certain actions would be effective in reducing erosion. Some tailings were removed to straighten out the small creek to prevent more erosion, and rock was placed to armor the stream bank where it was eroding. Different plants were transplanted at different elevations on the tailings to see if the plants would grow and hold onto the tailings. The EPA will evaluate the progress of the treatability study in 2014.

The EPA, as mentioned above, will complete its Remedial Investigation and Risk Assessment for the site in 2014. DEC and the other agencies will discuss various cleanup alternatives and the EPA will begin the Feasibility Study, a report that evaluates different cleanup alternatives based on a standard set of criteria.

For more information about hazardous substances that are listed in this fact sheet and the effects of exposure to those substances on human health: