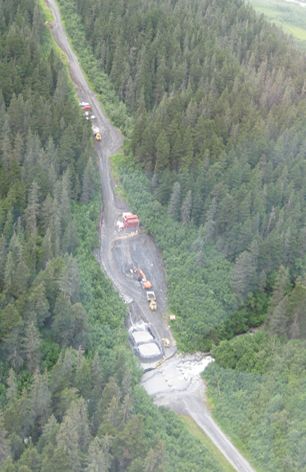 The DEC Liaison to the Joint Pipeline Office (JPO) is functionally part of the Trans-Alaska Pipeline System (TAPS), Financial Responsibility and Prevention Initiatives Section in DEC’s Prevention Preparedness and Response Program.  However, the DEC Liaison to the JPO works with all Divisions and Programs in DEC.  The DEC Liaison to the JPO is the primary contact for initial coordination between DEC’s environmental oversight and the multiple State and federal agencies within the Joint Pipeline Office. The DEC Liaison is a member of the JPO Management Team whose mission is to coordinate with other agencies on overlapping jurisdictional authorities related to the TAPS Pipeline, the Valdez Marine Terminal, and common carrier pipelines in Alaska. Visit the Trans-Alaska Pipeline System Frequently Asked Questions webpage for more information

The JPO was established in 1990 and is a group of six state and six federal agencies sharing regulatory or management responsibilities related to oil and gas pipelines in Alaska, most notably the TAPS pipeline.  Representatives from 12 agencies coordinate state and federal oversight of pipelines, issue right-of-way leases and other permits needed for oil and gas projects in Alaska. Cooperative agreements (JPO Operating Agreement, JPO Executive Council Agreement)were developed between agencies to share staff, knowledge, equipment, and office space. This unique working environment eliminates duplication of work, is more customer oriented, and simplifies complicated and lengthy government processes.

The Alaska Department of Natural Resources (ADNR), and U.S. Bureau of Land Management (BLM), as land managers, co-manage the activities of the JPO. The State Pipeline Coordinator's Office (SPCO) administers 21 pipeline right-of-way (ROW) leases, the most significant being TAPS. BLM administers three ROW grants with TAPS being the only operational pipeline.

The SPCO was established within ADNR by Administrative Order in 1987. That and subsequent Administrative Orders (AO 134 and AO 187 ) established the SPCO as the lead agency for the State in processing pipeline ROW leases under Alaska Statute (AS) 38.35. This responsibility includes coordination of the State's efforts related to the federal ROW process. The SPCO also coordinates the State's oversight of preconstruction, construction, operation and termination of jurisdictional pipelines. The State of Alaska's policy, as set out in AS 38.35.010, is that development, use, and control of a pipeline transportation system make the maximum contribution to the development of the human resources of this state, increase the standard of living for all its residents, advance existing and potential sectors of its economy, strengthen free competition in its private enterprise system and carefully protect its incomparable natural environment.  Under AS 46.03 DEC has an important role in ensuring the protection of the Alaska environment and implementation of the State’s policy.