Location
Point Lena, Favorite Channel, north of Juneau, Alaska
Time/Date
The S/S Princess Kathleen grounded and sank off Point Lena on September 7, 1952
Spill Id
10119904701
Product/ Quantity
The total volume of number 6 bunker oil and other oils on-board the vessel at the time of sinking is unknown. Volume of Bunker Oil and Other Petroleum Products Recovered is 130,000 gallons from 14 of 14 tanks
Cause
The 369-foot passenger vessel S/S Princess Kathleen grounded on Point Lena, just north of Juneau, during bad weather on September 7, 1952 and suffered damage to the forward-most section of the bow. As the tide came in, the vessel flooded from the stern and slid off the point. Approximately 10 hours later during an incoming tide she slipped off the rock and sank with an unknown quantity of fuel oil in her tanks. The vessel now sits at an angle on its port side at a depth ranging from 52 feet at the bow to 134 feet at the stern. Since her sinking, periodic fuel releases and oil sheens have been noted in her vicinity. 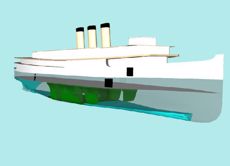 An initial image from a model of the vessel and its fuel tanks (green) which will assist Global Diving in estimating fuel volume on board the Princess Kathleen. 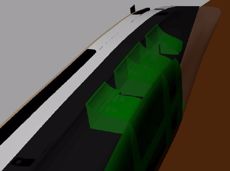 This image has the vessel oriented at the angle in which it is currently lying.

A dimensional model of a global divers holding the equipment used to hot tape the bunker oil fuel tanks. During hot taping, heating elements and circulated warm water heat the oil until it is fluid enough to pump. The oil and warm water are pumped into an intermediate tank where the oil is separated from the water. The bunker oil is then transferred into a barge to await disposal.

Dimensional model of the dive platform vessels moored above the wreck of the Princess Kathleen. Model by Global Diving and Salvage.

Videos are hosted externally on Vimeo.com

An interactive web map showing priorities identified by State and federal resources agencies for protection of salmon streams in the unlikely event of a large spill from the Princess Kathleen. Response equipment has be pre-positioned near sensitive areas in containers for rapid deployment should a response become necessary. Use the "i"dentify tool in the upper right corner to see information on features of the map. Click the "Help" link for more instructions.