Location
Baker Platform, located offshore in Cook Inlet approximately 18 miles northwest of the City of Kenai and approximately 45 miles southwest of Anchorage (Latitude: 60.82917; Longitude -151.33361). See Cook Inlet Platforms & Infractructure map, courtesy of Cook Inlet Regional Citizens Advisory Council website. Additional information on their website at http://www.circac.org/library/
Time/Date
No spill has been reported at this time. The fire was discovered by the crew on board the platform.
Spill Id
14239927501
Product/ Quantity
No spill has been reported. According to Hilcorp there is a maximum capacity of approximately 10,000 gallons of petroleum products on the platform. The Unified Command conducted an overflight of the area at 10:00 a.m., October 3, 2014 and reported no evidence of petroleum product discharge into the Cook Inlet.
Cause
No spill has occurred. A fire started in the above deck structures of the Baker Platform. Cause of fire is under investigation. 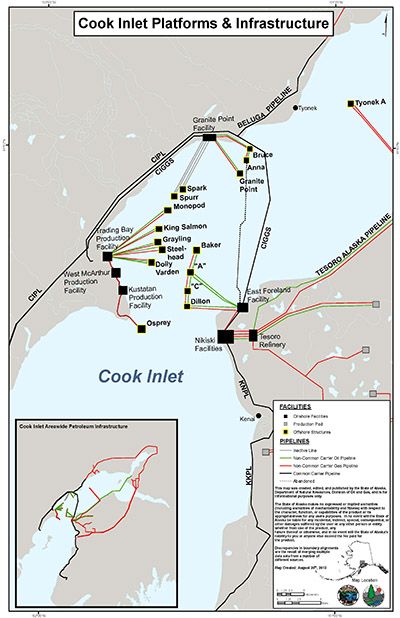