This web page is designed to show current information to control fugitive dust and prevent health effects to people living or working near the Red Dog Mine, north of Kotzebue and near the communities of Kivalina and Noatak. For information concerning other environmental issues on the Alaska Department of Environmental Conservation (DEC) website which relate to the mine, type "Red Dog" into the search window at the upper right corner of this page. 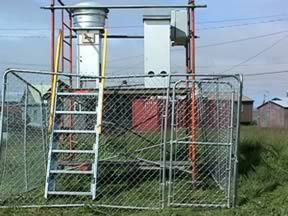 Air monitoring in Noatak and Kivalina:

The Red Dog Mine is located in the DeLong Mountains north of Noatak, about 90 miles north of Kotzebue and approximately 55 miles inland from the Chukchi Sea, in the western end of the Brooks Range of Northern Alaska. Red Dog mine is located on land owned by the NANA Regional Corporation, Inc., an Alaska Native corporation. Teck Cominco Alaska Inc. operates the mine. Operations began in 1989.

Ore containing lead sulfide and zinc sulfide is mined and milled to produce concentrated lead and zinc powder. These concentrates are trucked year-round from the mine along a 55-mile road through Cape Krusenstern National Monument to the shallow-water port for storage and eventual loading onto ships when the port is ice-free, only about 100 days a year. From the storage buildings the concentrated ores travel on an enclosed conveyor system to the ship loader and into barges. The barges have built-in and enclosed conveyors to load the holds of deep-water ships.

A 2001 moss study performed by the National Park Service, Ford and Hasselbach 2001 (PDF 699K) found elevated concentrations of metals in tundra along the road and near the port, apparently resulting from escaping ("fugitive") dust from operations along the transportation corridor. ADEC began work to determine the extent of contamination from this dust along the DeLong Mountain Regional Transportation System (DMTS), which includes the entire transportation corridor from the mine to the port, including the road, the port facilities, and the barges. The Contaminated Sites program is now overseeing that work and also addressing historic spills of petroleum products at the mine.

Teck Cominco has made a number of operational changes in the past few years to reduce fugitive dust from its operations (see more detail below). In the meantime, a remedial investigation is being conducted for Teck Cominco by the firm Exponent to assess the public health and environmental impacts of fugitive dust deposited along the transportation system. The first step was to characterize the contamination, then assess the risk to nearby residents, workers, subsistence food gatherers and the environment Based on information in the risk assessment, DEC will determine what next actions need to be taken at the site to minimize risk to human health and the environment.

Of concern is possible exposure to elevated concentrations of metals, particularly lead, zinc and cadmium, found in the soil, mosses and dust on vegetation adjacent to the haul road. As a result, metals present in the ore concentrates and in the environments surrounding the haul road are being evaluated through the risk assessment process.

A study conducted in 2001 by the Alaska Department of Health and Social Services, Environmental Public Health Program, found that it was safe to continue eating subsistence foods. Also, prior work found that the form of lead present in the concentrates is less easily absorbed by the body than other forms of lead. The risk assessment evaluated these exposures and risks in greater detail.

Organic compounds associated with past petroleum hydrocarbon spills were not part of the risk assessment because they occur in localized areas, primarily at the port site. These organic compounds generally remain at depth or beneath pavement, and therefore are not in a place where current human exposure occurs.

The areas surrounding the DMTS where fugitive dust has been deposited are being evaluated to determine what risks the fugitive dust deposition poses to human health and the environment and what actions may be necessary to reduce those risks. The process used is the state's contaminated sites cleanup process laid out in regulation. This process allows a risk assessment to be conducted to get very specific information to estimate possible risks to humans, plants, animals and the environment posed by current and future exposure to metals in soil, water, sediments, and biota in areas surrounding the DMTS.

The risk assessment evaluates whether people and the environment could be exposed to possibly hazardous substances and assesses what the risks are from exposure. It is used by DEC managers to determine whether any additional cleanup or control measures are necessary. During preparation of the risk assessment residents provided information about how they use the land and what foods they gather so this information can be considered. Much information has been gathered from village meetings and direct contact with DEC, and has been incorporated into the risk assessment.

Improvements have been made to equipment and operations at the port to control fugitive dust. Monitoring programs continue to help assess the results of the improvements. Here are more details on these efforts, provided by Teck Cominco:

2002 roadbed concentrate recovery and recycling program
During July 2002, extensive road surface sampling took place on both a 5-mile portion of the DMTS road from the port toward the mine, and also on the loop road providing access to the concentrate storage buildings. Concentrate material was recovered and recycled at the Red Dog mine according to a work plan approved by DEC in June of 2002.
Test paving of the road
A 5-mile test strip of experimental road surface (Hi-Float) was placed at the port site during July 2002 after the roadbed sampling, recovery, and recycling program was completed. The test sections are being monitored for two years to evaluate 1) the durability of the Hi-Float road surfacing, 2) its suitability for controlling tracking and reducing fugitive dust from the DMTS road, and 3) whether road surface and equipment maintenance requirements are reduced.
Improvements to the Red Dog port site fugitive dust control system
Steps have been taken to improve control of fugitive dust at the port, including a new truck unloading building, improvements at the concentrate storage buildings, at the conveyors and the surge silo between conveyors, at the barge loader, and on the barges. In spring of 2003, before the start of the shipping season, nearly $4 million dollars was invested in improvements to both the barge loader and the barges to control fugitive dust. A new bag house was installed and all of the seals on the conveyors that carry concentrate to the barges were upgraded. The barge loader conveyor was also enclosed to prevent escaping dust. The modifications were completed on June 20, 2003 before shipping started. The barge dust control systems were modified in a similar manner.
Truck spill sites
Since the start of the Red Dog operation, a number of truck spills have occurred. While most of the spilled concentrate and fuel was recovered at the time of the incident, data to document recovery efforts on older spills was sparse. A study characterizing these sites was completed during 2003. The operation has been implementing a program to recover, recycle, and restore/revegetate the former spill sites.
Port site characterization and recovery efforts
The 2002 port site characterization was a significant program focused on defining the nature and extent of fugitive dust at the port. During 2002, recovery and recycling were conducted at numerous active and inactive areas of the facility that had elevated metals concentrations in soil. Characterization continued in 2003 and the 2003 information is included in Appendix A of the revised risk assessment work plan.
Ongoing monitoring program
Air monitoring at the port and along the DMTS road with dust fall jars. Road surface sampling is conducted every two months at eight monitoring stations. The near-shore marine sampling at the load-out facility also continued every two years. These monitoring efforts are intended to provide information necessary for evaluating the effects of control measures on fugitive dust emissions.
Air monitoring in Noatak and Kivalina
Teck Cominco has been monitoring the air in Noatak and Kivalina to determine the levels of lead in airborne dust in both villages. This monitoring addresses village concerns about air quality and also fulfills the requirements of a settlement agreement with DEC. Teck Cominco is required to conduct one year of monitoring at both villages. The Noatak monitoring was conducted between March 13, 2003 and March 13, 2004. Results for Noatak show lead levels about 80 times below the National Ambient Air Quality Standard for lead. Results for Kivalina had lead levels about 200 times below the National Ambient Air Quality Standard.