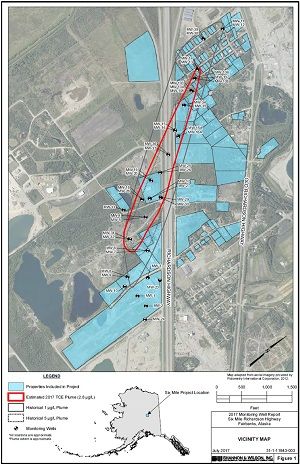 Trichloroethene, also known as trichloroethylene or TCE, was discovered in groundwater and drinking-water wells serving homes and businesses in the Six Mile Richardson Highway area of Fairbanks in 1995. TCE is an industrial solvent and degreaser that has been shown to cause adverse health effects in humans. The Alaska Department of Environmental Conservation (ADEC) has been monitoring groundwater quality and other environmental conditions in the area since the 1990s, to evaluate the potential risk to human health.

The TCE groundwater contaminant plume in the area measured slightly more than a mile long, up to 1,200 feet wide, and more than 100 feet deep when it was discovered in the 1990s. The plume originates from multiple sources in an industrial area south of the Richardson Highway, near the intersection with Davison Street, and extends northwest into the Six Mile Village Subdivision. ADEC has been studying the plume by measuring concentrations of TCE and other volatile organic compounds (VOCs) in drinking-water wells and monitoring wells of various depths. TCE concentrations in the plume have gradually decreased since 1995 as the result of natural breakdown and dilution.

The ADEC released new groundwater cleanup levels in November 2016 based on updated information used to evaluate exposure risk to humans for TCE and other contaminants. The updated ADEC cleanup level for TCE was lowered from 5 micrograms per liter (μg/L) to 2.8 μg/L. This concentration for TCE is being used as the threshold for continued private well sampling and/or treatment-system maintenance in the Six Mile plume area.

Activated carbon water treatment systems that remove TCE from drinking water were installed in qualifying homes where TCE concentrations were greater than the regulatory limit in the Six Mile area. The ADEC paid for water testing and the installation and maintenance of the treatment systems.

Based on the data collected from 2017, private wells affected by the TCE contamination plume are now below ADEC regulatory limits therefore all private wells no longer qualify for free water testing and treatment system maintenance. Private-well data at each location exhibited cumulative risks below the regulatory limits that are in place to protect human health, safety, and welfare and the environment.

If TCE in your well is not above 2.8 µg/L, your well water may be safe to drink without treatment. It is important to note that there are many types of contaminants other than TCE that can affect your drinking water quality. ADEC does not regulate or test private drinking water wells. If you have a treatment system, proper maintenance of your system is necessary. Improper maintenance may worsen water quality.

Certain chemicals, including TCE, give off vapors that can travel through air spaces within the soil. If the pressure inside a building is lower than in the soil, or if the amount of chemicals in the soil gas is high, the vapors can enter into buildings through cracks in foundation, crawl spaces and basements. This is termed “vapor intrusion”. Sometimes people in the buildings can smell a chemical, however, often the chemicals are odorless or too faint to smell. The best ways to assess the potential for vapor intrusion is to evaluate indoor air quality and evaluate soil gas beneath or near buildings. In order to evaluate soil gas beneath a building, sampling is conducted through the foundation by drilling a small hole to sample the interface between the foundation and soil.

In 2016, DEC looked for new drinking water wells or wells that had not been sampled for a while and tested water in these wells for TCE. No new wells were found with TCE concentrations above cleanup levels.

The following are previous fact sheets for the Six-Mile Richardson Highway site from the Contaminated Sites Program, DEC: