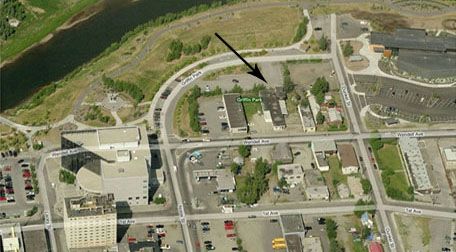 Figure 1. The arrow points to the building at 314 Wendell Ave. that now houses ES Cleaners, formerly MC Commercial Cleaners. The river is the Chena River. (Photo courtesy of Bing Maps.)

The Alaska Department of Environmental Conservation has installed both a soil vapor extraction system and sub-slab depressurization system at 314 Wendell Ave. to address chlorinated solvent contamination in the soil. Both systems are operating to remove chlorinated solvents from the soil, and to try to stop contaminant vapors in the soil from entering the building through cracks in the cement foundation – a process called vapor intrusion.

The main contaminant is tetrachloroethene, a chlorinated solvent that’s a common dry cleaning chemical also known as perchloroethylene, PERC, or PCE. In the remedial systems, a series of extraction wells installed in the source area draw chlorinated solvent vapors from the soil pore spaces (the air between the soil particles) and exhaust them to the atmosphere. The soil vapor extraction, or SVE, system removes contaminants from the surrounding soils as vapor, while the sub-slab depressurization, or SSD, system creates a vacuum-induced negative pressure beneath the building’s foundation slab to prevent vapor intrusion and remove contamination from soils beneath the building.

What is vapor intrusion? 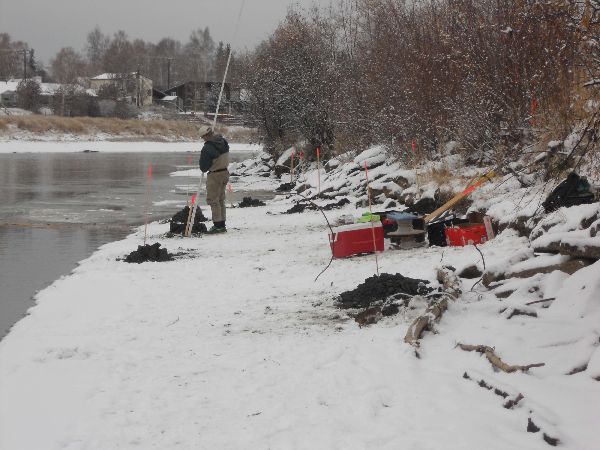 Figure 2. A DEC contractor samples pore water along the banks of the Chena River in October 2010. (Oasis Environmental Inc. photo, for DEC)

Groundwater monitoring wells have also been installed at the site and in Griffin Park to monitor contaminant concentrations, and to better understand subsurface geochemistry and groundwater-surface water interactions. As the groundwater moves toward the Chena River, microbes and certain minerals in the soil can transform, or degrade, the main contaminant, PCE, into TCE, or trichloroethylene, and other compounds. TCE has been found in the sediment pore water of the Chena River – where groundwater discharges into the river – indicating the migration and discharge of contaminants to the river.

The contaminated soil around Wendell Avenue was first discovered and reported to DEC in 2000 and 2001, when contractors were doing routine real estate environmental assessments for the construction of the nearby Morris Thompson Cultural and Visitor Center. 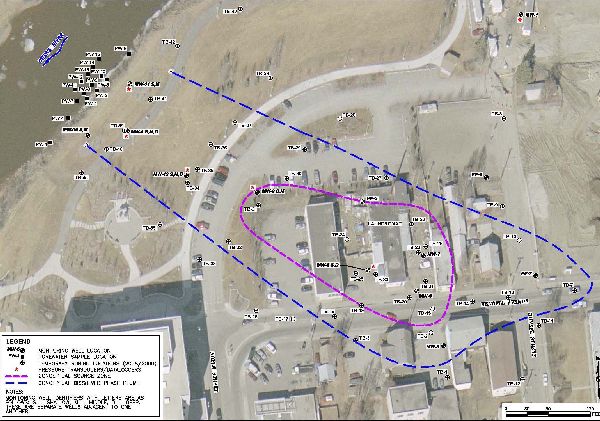 In 2002, DEC asked the current and past property owners of 314 Wendell Ave. to pay to finish the investigation into the solvent releases, but they were financially unable to do so. Then in 2007, DEC hired a contractor to sample the soil gas and indoor air at the dry cleaners and two properties to the south, due to an increased concern that vapors from the contamination were entering buildings where people work.

The soil gas concentrations from the sampling showed a significant release of solvents at 314 Wendell. DEC completed a full release investigation in 2008. Additional site characterization, vapor intrusion sampling, groundwater monitoring and a remediation feasibility study have occurred since 2008. (See the individual reports in the More Information section below.) 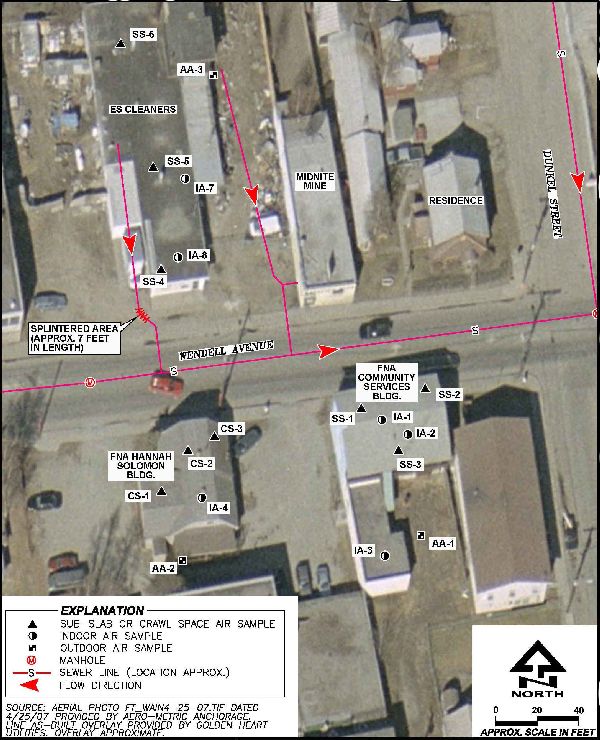 A summary of what we’ve found

The results of the site investigations confirm there have been significant releases of chlorinated solvents from historic operations at 314 Wendell. PCE, along with its degradation products, are the primary contaminants of concern in soil, soil gas and groundwater.

As mentioned earlier, PCE can be degraded by microbial activities in the soil and groundwater, to trichloroethene (TCE), dichloroethenes (DCE), vinyl chloride (VC), and ultimately ethene and chloride. Both PCE and some of these breakdown products have been detected in the soils and groundwater at the site, particularly downgradient and closer to the Chena River. Often the microbial biodegradation processes proceed slowly, or even stall, producing these intermediate degradation products that can continue to contaminate soil and groundwater. Transformations of the PCE at the Wendell Avenue site have resulted in TCE being found in pore water of the Chena River above groundwater cleanup levels, indicating that contaminants are being transported in groundwater that eventually discharges to the river. (See Figures 2 and 3.)

In addition to the soil and groundwater impacts, contaminant vapors are also present and are migrating from the soil into the three nearby buildings that DEC has tested. (See Figure 4.) Of those three buildings, only the one, at 314 Wendell, has indoor air concentrations that are significantly above risk-based levels, but the presence of vapors at each building indicates a potential risk that must be addressed during the cleanup of the area. DEC and the Alaska Department of Health and Social Services are working with the owners to keep them informed of these issues and help alleviate the risk as necessary.

The investigations included taking samples of indoor air, soil, soil gas and groundwater. Each of these kinds of samples gives us a better picture of where the contamination is and how it might move, along with the risk it might present to people who use the property, now and in the future. The data indicate the soil, groundwater and soil gas across the 314 Wendell site has chlorinated ethene contamination above DEC’s cleanup levels. (PCE and TCE, as maximum concentrations found, are summarized in the chart below.)

The two remediation systems operating now are addressing soil contamination and mitigating vapor intrusion at 314 Wendell, and they likely reduce the potential for vapor intrusion in other nearby buildings. (See Figures 6-9.) 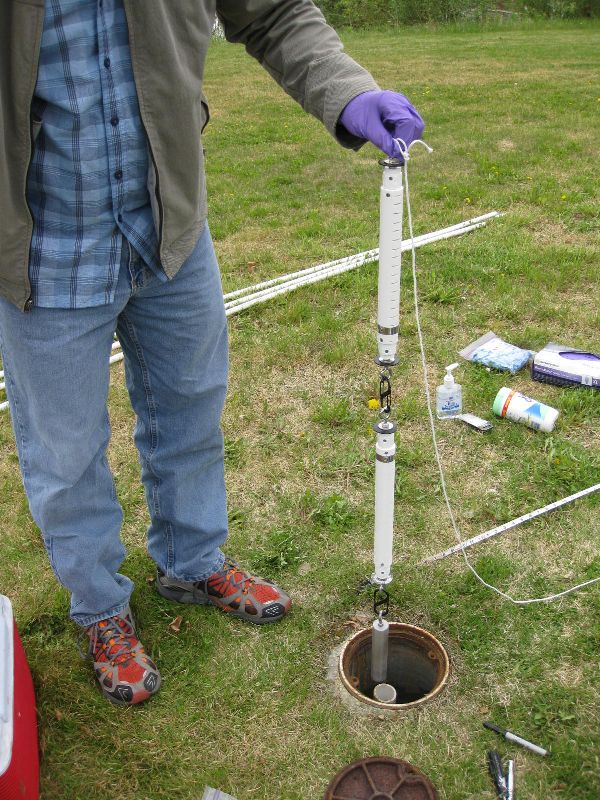 DEC plans to continue operating the soil remediation systems, and continue evaluating their effectiveness through continued vapor intrusion assessments. The systems may need to operate for many years to remove contaminants in soil and mitigate exposure risks.

DEC is also considering future groundwater remediation strategies by monitoring seasonal trends of contaminant concentrations and geochemistry in groundwater, sediment pore water and surface water. DEC has also recently deployed in situ samplers – “in place” samplers with the brand name Bio Traps™ in this case (see Figure 6) – to better understand the subsurface microbiology of the contaminated site. DEC will use that information to evaluate the best long-term remediation strategy for groundwater cleanup.

If you have any questions or need additional information, please contact James Fish, DEC’s project manager for the site, at (907) 451-2117 or james.fish@alaska.gov. 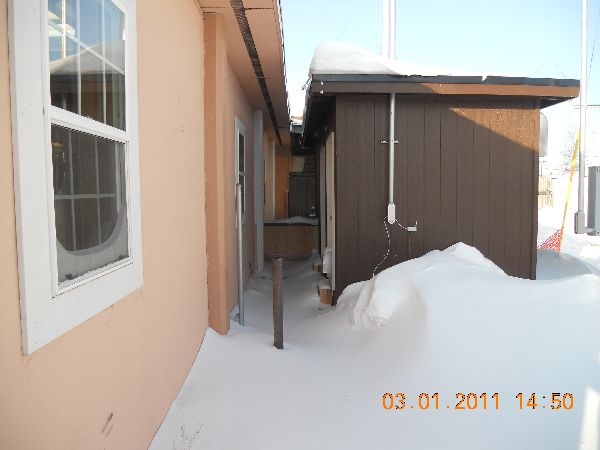 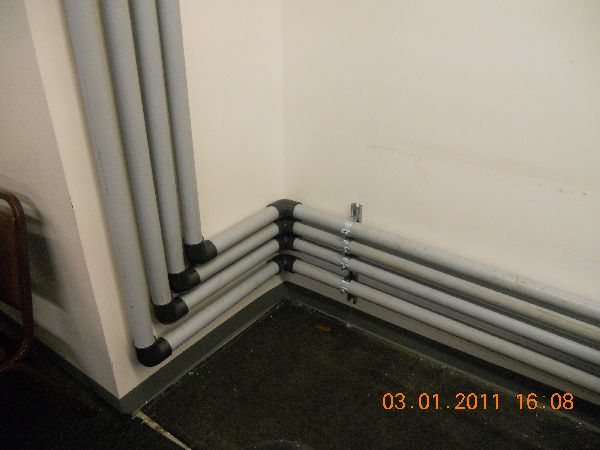 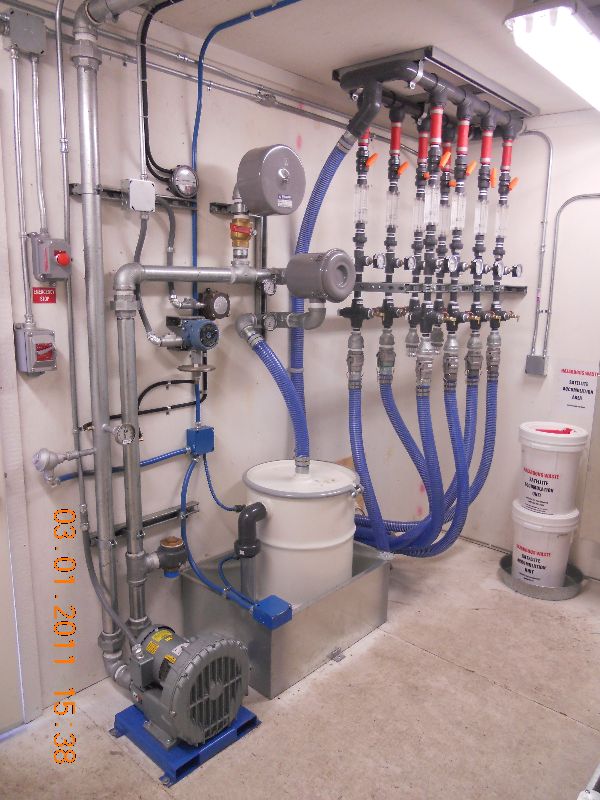 Contact Rebecca Bryan in the Contaminated Sites Program office in Fairbanks if you would like to read any of the following reports. She can be reached at Phone 907-451-2143, Rebecca.Bryan@alaska.gov, 610 University Ave., Fairbanks, AK 99709.