Location
Q2-Pad, Nuiqsut, Alaska
Time/Date
10:29 AM on February 15, 2012
Spill Id
12399904601
Product/ Quantity
Approximately 42,000 gallons (1,000 barrels) of fresh-water-based drilling mud were released to the ice drilling pad and adjacent snow-covered tundra. An unknown amount of gas was also released. Drilling mud is used to lubricate the drill, control formation pressure, and remove cuttings from the bore. No oil was spilled during the release event.
Cause
Repsol contractor Nabors Drilling was drilling an exploratory well when the drill penetrated a shallow gas pocket at a depth of 2,523 feet, resulting in a gas kick. The gas kick drove drilling mud out of the well and through the gas diverter onto the ice pad and adjacent snow-covered tundra. The gas diverter is a pipe that extends approximately 75 feet from the drilling rig toward the south edge of the pad. Additional mud was pumped into the well in an attempt to control it, but that mud was also forced out by the gas. 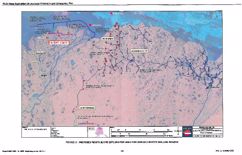 Oil Cleanup on the Tundra