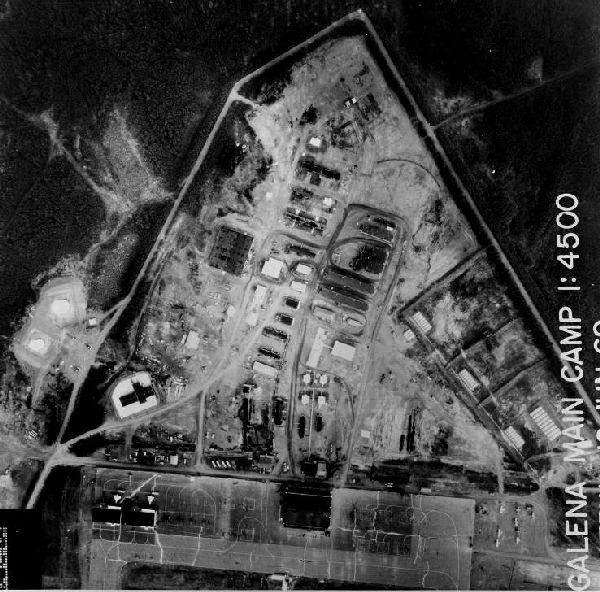 The former Galena Forward Operating Location (FOL) is located on the northern bank of the Yukon River in the City of Galena, approximately 45 miles east of Nulato, 270 miles west of Fairbanks, and 350 miles northwest of Anchorage.

The City of Galena, Alaska was established in 1918 as a supply and trans-shipment point for lead ore (galena) mining prospects south of the Yukon River. The location was on the site of a former Athabaskan fish camp recorded in the 1880 Census map as Natulaten. A school was established in the mid-1920s and a post office opened in 1932. The population of Galena in 1940, the year the Civil Aeronautics Authority (CAA) began the first buildup in Alaska, was 30 people. Most residents were Athabaskan Indians who moved there from nearby villages on the Yukon River.

In 1941, the federal government set aside 5,282 acres for the CAA to establish an air navigation facility as part of an overall civilian airport construction program in Alaska. The CAA selected Galena because of its central location in interior, western Alaska. Prior to World War II, the military had no presence in Galena. From August 1942 until September 1945, Galena supported the lend-lease transfer of American aircraft to the Soviet Union. In 1942, an Army post was established in Galena and the CAA officially turned operation of the airfield over to the military on July 1, 1943. At the end of WWII, the Army declared the airfield surplus and CAA resumed control of the airfield and facilities.

The newly created United States Air Force (USAF or Air Force) was the next military service to use the Galena Airfield, beginning in 1945. The 11th Air Force was designated the Alaskan Air Command (AAC) and in early 1951, the AAC negotiated an agreement with CAA for joint use of Galena Airport. The Galena Airport was made the site of the regional long-range radar for aircraft control and warning, as part of the conversion to minimally attended radar in 1984.

By 1993, all permanent military personnel and aircraft had withdrawn from Galena. Many of the previous USAF facilities were transferred to federal, state and local entities for their exclusive uses. The remaining facilities reverted to caretaker status and a contractor was hired to maintain the properties. On August 25, 2005, the Base Realignment and Closure (BRAC) Commission voted unanimously to close the former Galena FOL.

Unique to the former Galena FOL is the fact that the Air Force operated facilities on a combination of land leased from the State of Alaska and land that was reserved for continued federal use after Alaska became a state through the 1966 deed. From the initial construction by the CAA (later the Federal Aviation Administration [FAA]) in 1941, through use by the Army from 1942 until the end of WWII, and at the beginning of the USAF build-up at Galena in the 1950s, Alaska was still a U.S. territory and the land in Alaska was federally owned. In 1959, Alaska became the 49th state and the federal government granted the new state 28 percent ownership of its total area. In the 1966 Omnibus Deed, as part of the land selection process, all lands within the Galena Airport boundary were deeded to the State of Alaska. The Deed reserved uses of certain lands on Galena Airport to specific federal entities.

Under the Base Closure and Realignment Act of 1990 (P.L. 101-510; as amended), the Air Force was required to permanently close its mission and terminate all military activities at Galena FOL by September 15, 2011. All former AIR FORCE facilities were declared excess and/or surplus and the facilities were either demolished or conveyed. The Air Force has released reserved land and terminated the majority of leases allowing property to transfer to the City of Galena, Galena school district, the Alaska Department of Transportation and Public Facilities (ADOT&PF), or the US Fish & Wildlife Service (USFWS). The USAF, however, remains responsible to cleanup any remaining contamination left by the Air Force, to be cleaned up in accordance with Comprehensive Environmental Response, Compensation, and Liability Act (CERCLA) or state requirements such as selection and implementation of remedies, including any applicable land use controls/ institutional controls (LUCs/ICs). The USAF is implementing LUCs/ICs through agreements with the primary landowners, the City of Galena, and ADOT&PF. The Alaska Department of Environmental Conservation (DEC) is overseeing the cleanup to ensure that it meets State of Alaska standards.

Currently, ADOT&PF operates and manages the Galena Airport and conducts its Galena operations out of a building that the Air Force formerly used for vehicle maintenance. Additionally, the City of Galena operates the Galena Interior Learning Academy (GILA) boarding school out of refurbished former Air Force buildings.

A major flooding event occurred in Galena in May 2013. Most of the structures in the town saw significant flooding and many were swamped by as much as seven feet of water. On June 25, 2013, President Barack Obama issued a Major Disaster Declaration for the area. The community of Galena continues to clean up and rebuild. 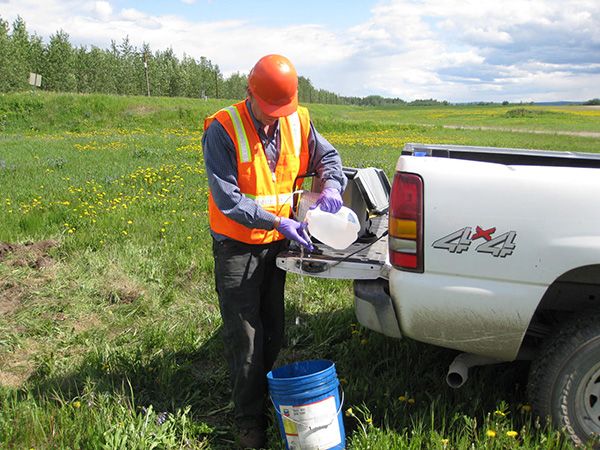 DEC’s Dennis Shepard is shown decontaminating a water interface probe during a groundwater monitoring well inspection for an old landfill at the Galena Airport project in the summer of 2012. The landfill is one of several that the Air Force used when the base was active. (DEC Photo)

The USAF and DEC work with local stakeholders via the Galena Technical Project Team (TPT) to address environmental concerns. In addition, communication with Galena community members occurs via a Restoration Advisory Board (RAB), which involves residents of Galena, Native group stakeholders, State and Federal agencies and the City of Galena. Semiannual TPT and RAB meetings are generally held each April and October.

A preliminary assessment (PA) was conducted in 2011 for the former Galena AFS. The PA identified more than 50 sites as potentially contaminated. An additional Site Inspection (SI) was recommended for 27 of the sites. The sites were investigated during 2010-2016 under an approved Work Plan for Site Inspection, Remedial Investigation and Site Characterization, Former Galena FOL, Alaska (August 2010). Samples were collected to evaluate potential releases of contamination, migration pathways and potential receptors (human and environmental). Sites with non-petroleum contaminants were identified as CERCLA-regulated and required Method Four Risk Assessments to evaluate risk to human and ecologic receptors. Currently, there are ten CERCLA-regulated remedial investigations and 24 state-regulated contaminated media characterization sites.

Ten potential munitions response areas were identified at Galena and investigated by the Military Munitions Response Program (MMRP). The sites were investigated by Digital Geophysical Mapping (DGM), intrusive investigation of target anomalies, and/or multi-incremental sampling methods. As of November 2017, only one site (EOD Range MRA 683), located to the northeast of Parcel D, remains to be investigated and cleared. Responsibility for the site is being discussed between the USAF and the U.S. Army Corps of Engineers to determine whether it will be addressed under the Formerly Used Defense Sites (FUDS) program. All other MMRP sites have been cleared for munitions debris and unexploded ordinance (UXO). No UXO have been identified at Galena. Munitions debris from the small arms range (bullets and shell casings) and lead- and antimony-contaminated soil are the only significant MMRP contaminants found on the Galena MMRP sites.

Contamination from the following petroleum and other hazardous chemicals has occurred at the Galena Airport over the years: 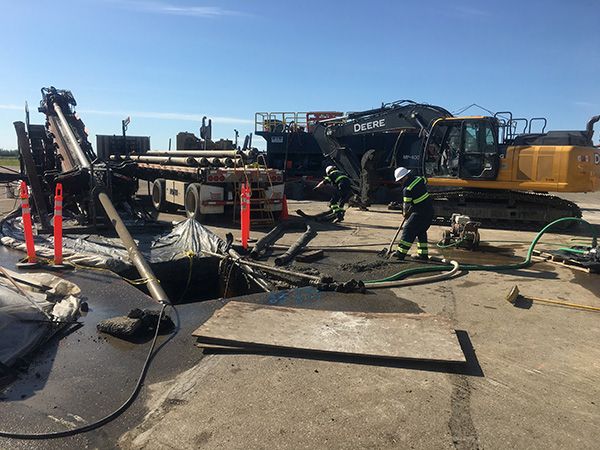 Advancement of a Horizontal Well at Galena FOL in summer 2017. The horizontal wells are approximately 1,000 ft. long and 45-75 ft. underground. Air will be injected into the wells to accelerate bioremediation of petroleum contamination in the soil and groundwater.

Site work and remedial investigations (RIs) conducted in 2010-2016 have enhanced our knowledge of contaminant concentrations in soil and groundwater. RI reports have been prepared to document the extensive investigation and the total extent of contamination identified at the CERCLA sites. As part of the CERCLA Remedial Investigation/Feasibility Study (RI/FS) process, Risk Assessments have determined the associated risks to humans and the environment from site contaminants. Feasibility Studies have been completed to evaluate different approaches and costs associated with cleanup of the contamination. The Galena Airport is currently in the Record of Decision (ROD) phase of the CERCLA cleanup process. The ROD documents the extent of contaminants in soil and groundwater, the cleanup levels or remedial action goals, and the cleanup approach for the sites under investigation. The development of a Remedial Design/Remedial Action (RD/RA) or cleanup plan, and implementation of selected remediation approaches will occur in the next few years under an Air Force performance-based remediation (PBR) contract that was issued in March 2014. 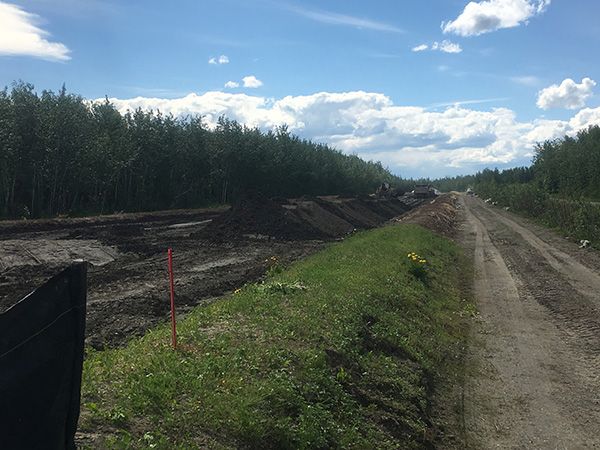 A stockpile of petroleum-contaminated soil at the Galena landfarm is shown in summer 2017. From the stockpile, the dirt is moved to nearby landfarm cells (visible in the background), where the soil is spread out to about 2 feet thick, fertilized, and is tilled several times a year to help bacteria break down the petroleum. The cells are left open, except during heavy rain and the winter. (DEC photo)

Some preliminary findings and recent activities related to the RI/FS process are listed below: 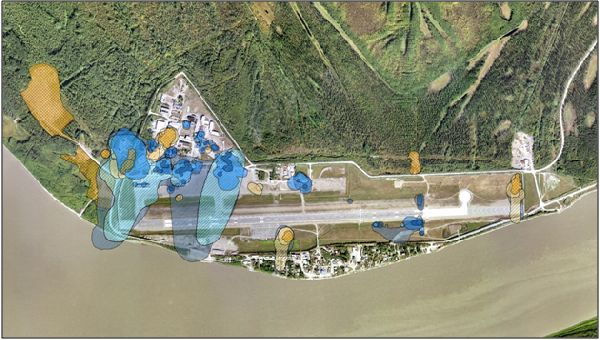 PFAS are considered an “emerging contaminant” because they:

The USAF is responding to potential releases of PFAS throughout the United States in response to the US Environmental Protection Agency’s (EPA) release of provisional health advisories for PFAS in May 2016. As of November 2017, cleanup levels have not been universally adopted for PFAS; however, DEC adopted cleanup levels for two PFAS compounds (perfluorooctane sulfonate [PFOS] and perfluorooctanoic acid [PFOA]) in November 2016. The most common source of PFAS for Air Force sites is AFFF, which was used for fighting aircraft fires and in fire suppression systems for facilities that store fuels.

A PFAS Site Inspection (SI) was completed at Galena FOL in 2016. As a result, five areas of contamination were identified:

ADOT&PF owns AFFF Areas 1, 3, 4, and 5. The City of Galena owns AFFF Area 9 (Sanitary Sewer System). In October 2017, Site CG109 was added to the Contaminated Sites Database. This site encompasses five areas where polyfluorinated alkyl substances (PFAS) and perfluorooctnoic acid (PFOA) have been detected above the DEC established cleanup levels for soil and groundwater. Additional investigation of identified PFAS sites at Galena FOL will likely follow the CERCLA RI/FS process. PFAS sites are being addressed under an emerging contaminants project/contract that is separate from the ongoing performance-based remediation (PBR) contract for the investigation of all other identified contaminated sites.