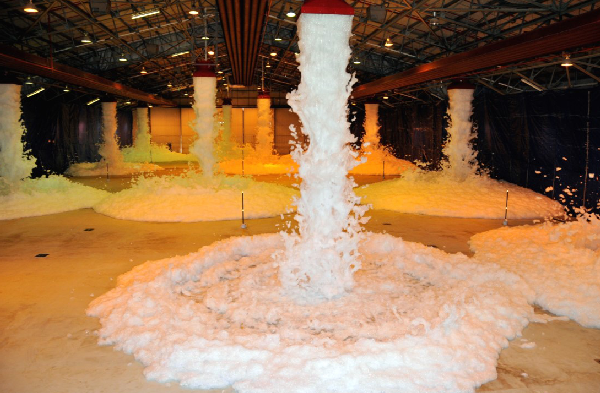 AFFF is often used in shipboard and shore facility fire suppression systems, fire fighting vehicles, and at fire training facilities. AFFF is purchased as a concentrate, typically referred to as “3%” or “6%” (Type 3 or Type 6, respectively) depending on its mixture ratio with water.

Per- and poly-fluoroalkyl substances (PFAS) are a large family of human-made chemicals that have been widely used in industry and consumer products since the 1950s. Perfluorooctane sulfonate (PFOS) is a long-chain PFAS found in older stocks of AFFF and as a breakdown product of precursor compounds. Perfluorooctanoic acid (PFOA) is also a long-chain PFAS. PFOA is not an intended ingredient in AFFF, but is a side product created during the manufacturing process. Many AFFF formulations contain other unintended PFAS side products that have similar health and environmental concerns. 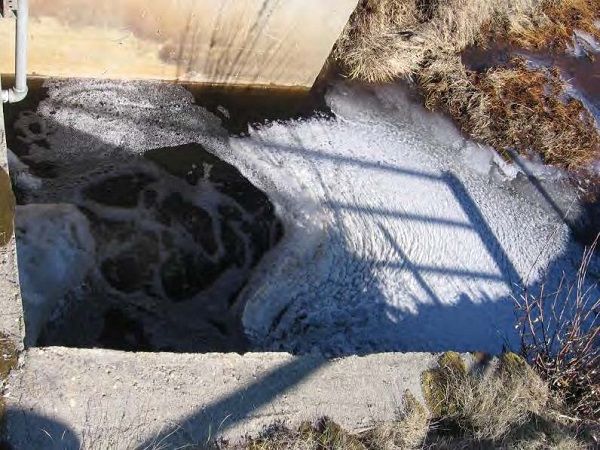 Regulations for PFAS in AFFF

ADEC has identified PFOS and PFOA and several other PFAS found in AFFF as hazardous substances. Any discharge of PFAS-based AFFF must be reported immediately to the State under 18 AAC 75. To report a new release or spill, contact:

When AFFF is used, discharged or released to the environment, containment and cleanup may be required to prevent future adverse health or environmental impacts.

DEC has established soil and groundwater cleanup levels for PFOS and PFOA at 18 AAC 75.341 (soil) and 18 AAC 75.345 (groundwater) and has proposed cleanup levels for additional PFAS. In addition, EPA has established a lifetime health advisory level for PFOS and PFOA – individually or combined – to protect people from PFOS and PFOA exposure in drinking water. PFOS and PFOA are not classified as hazardous wastes under the Resource Conservation and Recovery Act (RCRA); however, under the Toxic Substances Control Act, these compounds are regulated through Significant New Use Rules which give the EPA the authority to restrict the production and use of PFOS and PFOA containing products. AFFF constitutes a U.S. Occupational Safety and Health Administration hazardous material because of its physical hazards, such as skin and eye irritation. Discharge of wastewater and runoff containing AFFF on land, at sea, or to surface water bodies is also subject to regulation under the Clean Water Act. PFOS and PFOA may also qualify as pollutants or contaminants under the Comprehensive Environmental Response, Compensation, and Liability Act (CERCLA).

DEC strongly encourages all AFFF users to implement best management practices (BMPs) on selection, storage, use and disposal. Examples of BMPs are available in the reference section below. 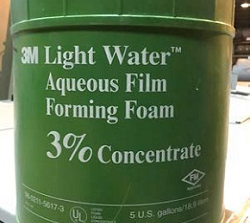 Due to their long shelf lives, older AFFF (including PFOS-based AFFF concentrate) may still be present in your inventory. Common product names or attributes include:

If the product name and/or purchase date cannot be determined, a sample can be sent to an analytical laboratory to determine the presence or absence of PFOS, using EPA Method 537. Users are advised to compare sampling costs and disposal costs, as it may be more cost-effective to properly dispose of limited quantities of unknown PFOS material rather than pay for sampling and analysis.

How to Dispose of PFOS-Based AFFF

AFFF must be disposed of properly. Although it is not characteristic for hazardous waste, nor is it listed as a regulated hazardous waste under RCRA, ADEC recommends that it be solidified and shipped to a non-hazardous waste landfill out of state that will accept this waste, or thermally destructed at a RCRA Part B Subpart O incineration facility. When shipping PFOS-containing AFFF out of state, use a licensed waste transportation and disposal company. AFFF may not be disposed of at sea, or through septic, stormwater, or municipal sewer systems.

Older PFOS and long-chain PFAS AFFF should only be used in emergencies where insufficient amounts of newer short-chain AFFF or other foams are available and where there is an immediate risk to human life, public safety or property. ADEC strongly recommends these older products be removed from use and properly disposed. Newer formulations may still be hazardous to human health and the environment and should only be used when necessary to prevent immediate threat to life or health.

Throughout Alaska, DEC has identified PFOS and PFOA contamination that is above cleanup levels and associated with releases of AFFF. Releases may have occurred at firefighting training locations, AFFF storage tanks and transport lines, accident/emergency response sites, and near facilities (e.g., aircraft hangars) with AFFF fire suppression systems.

If you or your agency would like to conduct groundwater sampling for these chemicals or if your records indicate your facility may have experienced AFFF leaks, spills, or releases to the environment, please contact the DEC Contaminated Sites Program at 907-465-5250.