For background on the history of this site, please see the Project History page 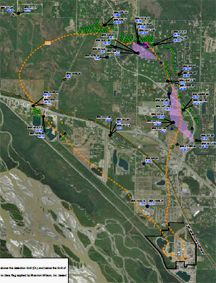 Map above shows the results of annual testing performed in 2019 to determine the approximate extent of sulfolane impacts in the North Pole area. Click on the map to download a larger version.

Contamination associated with historical oil refining activities at the former North Pole Refinery (now Marathon Terminal), located about 15 miles east of Fairbanks, has affected groundwater used as a source of drinking water in the North Pole area. The refinery operated from the late 1970s until it shut down in 2014. In 2009, the industrial solvent sulfolane, which was used in the refining process, was detected in drinking water wells off the former refinery property. In 2018, per- and polyfluoroalkyl substances (PFAS) used in fire-fighting foams on the former refinery were detected in groundwater off the property. The sulfolane groundwater plume is approximately 2 miles wide, 3.5 miles long and over 300 feet deep, and continuing to migrate gradually to the north-northwest. The PFAS plume appears to have a similar footprint, although the boundaries of the plume have not been fully evaluated. The former refinery’s land still contains fuel product trapped in the soil and groundwater, but these petroleum components have not migrated off the property.

Under DEC oversight in 2009, then-owner of the refinery Flint Hills Resources Alaska (FHRA) began providing affected residents and businesses with alternative drinking water solutions. They also began sampling and other activities to find out how far the sulfolane had spread. Sulfolane was found to have impacted approximately 350 drinking water wells. FHRA provided affected properties with either connections to city water (if available), bulk water tanks, bottled water, or point-of-entry (POE) treatment systems to remove sulfolane from their well water. Properties in a “buffer zone” beyond the sulfolane plume were provided interim bottled water to protect against possible migration of the sulfolane. Sampling conducted in 2018 showed that the alternative water solutions that provided for protection from sulfolane were also protecting residents from PFAS in their well water.

In February 2017, the State of Alaska, FHRA, and the City of North Pole reached a settlement agreement to expand the City’s piped water system to all improved properties located within the sulfolane plume or in its anticipated migration path. The expanded piped water system is expected to be complete by the end of 2020 and will provide permanent protection from contamination in groundwater that is used for drinking water. Long-term groundwater monitoring continues off the former refinery property to track the sulfolane plume’s migration and concentrations for protection of properties developed in the future or ones located beyond the expanded piped water area. On the former refinery property, groundwater monitoring is used to track sulfolane and petroleum concentrations.

PFAS were discovered beyond the former refinery’s property boundary in a single 2018 sampling event. Plans are under development for future sampling to be performed under DEC oversight.

Litigation continues between the State of Alaska and the former refinery owner, Williams Alaska Petroleum Inc. The company was not part of the 2017 settlement agreement.

Contamination summary: soil and groundwater on the former refinery property is contaminated with sulfolane, PFAS and petroleum constituents. Sulfolane and PFAS in contaminated groundwater have migrated off the property.

Sulfolane is an industrial solvent used primarily in natural gas and petroleum refining. Most of what we know about how sulfolane might affect human health comes from studies in which laboratory animals were exposed to sulfolane for periods of time. The National Toxicology Program is currently studying the long-term effects of exposure to sulfolane in water on rodents. For more information on the toxicity of sulfolane and the National Toxicology Program studies, see the following:

Per- and polyfluoroalkyl substances (PFAS) are a large and complex class of human-made compounds which have a wide-range of toxicities. They are found in some firefighting foams and a many consumer products.

The links below provide recent information regarding contamination off the former refinery property:

Drinking Water: The public in the affected area has been provided access to alternative water solutions and recently has had the opportunity to connect to the North Pole municipal water system. Starting in 2009, alternative water supplies were provided to all properties with any detection of sulfolane in the water. In February 2017, the State of Alaska, FHRA, and the City of North Pole reached a settlement agreement to expand the City’s piped water system to all improved properties located within the sulfolane plume or in its anticipated migration path. Implementation of the expanded piped water system is expected to be complete by the end of 2020 and will provide permanent protection from contamination in drinking water. For more information about the piped water expansion project and use of well water within the expansion area, see the following:

Gardening: In 2010, produce from North Pole gardens that used sulfolane-impacted well water for watering were sampled. The results were based on the testing of 23 types of plants from seven North Pole gardens. Results affirmed that some edible garden plants retain sulfolane from contaminated well water. Sulfolane levels in produce varied depending on the type of plant and part of the plant tested.

DEC also evaluated the uptake of PFAS into garden produce irrigated with PFAS contaminated groundwater. Produce and soil samples were collected from a farm in North Pole to evaluate impacts from irrigation water containing PFAS. Results of this evaluation are summarized in the fact sheet below.

Fish: PFAS are present in samples of three rainbow trout collected from Kimberly Lake, northwest of the former refinery, in 2018. PFAS were measured at levels of concern in all three fish. Kimberly Lake has been closed to fishing since April 2019 by the Alaska Dept. of Fish & Game because of PFAS levels found in fish. Results may be found by following the links below.

Groundwater Advisory: In November 2018, DEC issued a Contaminated Groundwater Advisory to all property owners within the North Pole piped water expansion area where many private water wells contain sulfolane and/or per- and polyfluroroalkyl substances, known as PFAS.

The advisory assists residents in avoiding unintentional contact with, or spreading of, the chemicals present in well water. DEC advises against using untreated, contaminated well water that may cause the spread of pollution. Bringing impacted well water to the surface may expose people to the chemicals and/or allow the chemicals to spread onto other properties, sloughs, or ponds. In issuing this advisory, DEC is seeking the community’s assistance in minimizing the future spread of these contaminants.

If you are concerned you may have sulfolane or PFAS in your well water, DEC has prepared Fact Sheets to provide step-by-step advice for testing your water. DEC recommends you contact Brian Englund at (907-269-7526) or the Contaminated Sites Program at (907-451-2143) if you have any questions about testing.

The former refinery is currently being operated as the Marathon Terminal. Refining operations ceased in 2014. In 2019, Marathon Petroleum (MPC AlaskaTerminal Company LLC) purchased the property and operations.

In October 2019, a trial was held in Fairbanks to settle the litigation between the State of Alaska, Flint Hills Resources Alaska and Williams Alaska Petroleum Inc. Results are discussed in the press release below from the Department of Law.

Long-term groundwater monitoring continues both on and off the former refinery property under DEC oversight. The 2019 annual onsite and offsite monitoring reports and selected maps may be accessed by the links below.

The 2018 offsite PFAS monitoring report may be accessed by following the links below.

Information about the piped water expansion project may be found at the City of North Pole’s website.