During the 1970s, Fairbanks was a hub of construction activity for the Trans Alaska Pipeline System. In those years, a construction and storage yard for the pipeline was located on part of former Tax Lot 201, the southern portion of the adjoining former Tax Lot 203, and the Johansen Expressway right-of -way between the tax lots. Vehicle maintenance and other heavy industrial businesses also operated on former Tax Lot 201. 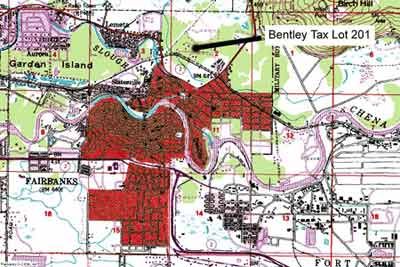 The general location of the areas of land called Bentley Trust Tax Lots 201 and 203 is north of the City of Fairbanks. The city is shown in red.

Significant areas of contaminated soil and groundwater have been found from those days gone by, caused by various leaks, spills and outdated disposal/storage practices of oil and hazardous wastes. Cleanup has allowed the area to be redeveloped with a mall and several large stores. An innovative collaborative process between multiple landowners has guided continued cleanup, even as the land became available for development.

The pipeline construction and storage yard and other businesses were abandoned in the early 1980s. Except for limited development in the eastern and southeastern portions of its 154-acres, former Tax Lot 201 remained idle until the late early 2000s.

The Johansen Expressway, constructed in the late 1980s and early 1990s, now runs between the two lots. Gravel mining took place periodically on the 213-acre former Tax Lot 203, from 1990 through 2002. Operators pumped significant quantities of groundwater from the pit areas in the summer of 1990. The significance of this act to the spread of contamination came to light during the mid-2000s. 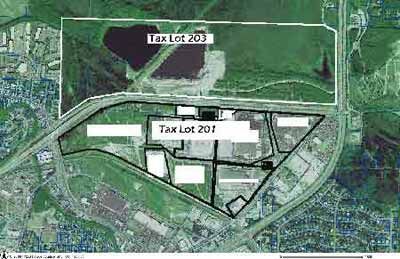 The two tax lots' general boundaries are noted on a Fairbanks borough aerial map. A larger version of the map appears below. (Source: Fairbanks North Star Borough, with DEC rendering)

The Bentley Family Charitable Trust, later became the "Bentley Beneficiaries Trust," owned the former tax lots, and the Union Bank of California as Co-Trustee of the trust oversaw site investigations. DEC has provided regulatory oversight. In 2004, Alyeska Pipeline Service Company, as the operator of the old pipeline construction and storage yard, began to participate directly in the process to clean up the contaminant trichloroethylene (TCE) and the chemicals produced during its breakdown in the environment.

To facilitate sale of the land, site investigations began in the late 1990s by the removal and cleanup of known underground storage tanks and injections wells. Soil and groundwater contamination was also detected at several locations. The contaminants are petroleum hydrocarbons (such as diesel) and chlorinated solvents (specifically, TCE - a degreasing agent). A variety of chemicals have also been detected which are typical components or degradation products of petroleum products, chlorinated solvents, or both.

In the early 2000s, portions of former Tax Lot 201 were sold and developed, beginning on the eastern side the property and proceeding westward over time. Continuing investigation revealed wide-spread groundwater contamination on the western portion of the lot. By 2003, a major source area of TCE contamination was identified in the vicinity of the former Double Jointing and Coating buildings, associated with construction of the Trans Alaska Pipeline. The groundwater was contaminated to a depth of at least 30 to 40 feet below the water table. 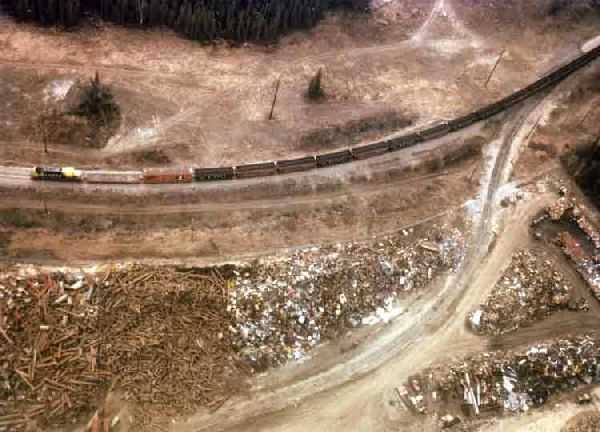 At the end of construction of the pipeline, scrap pipe, other metal and drums were stockpiled on Tax lot 201 for hauling south. Shown above the scrap piles is an Alaska Railroad train, The railroad tracks are at the southern boundary of the property. (DEC photo, late 1970s.)

A plume of groundwater contamination originates at the source area and extends off former Tax Lot 201 toward the west/southwest and the Lemeta and Palace Court Subdivisions. These subdivisions are a mixture of residential and commercial properties. A portion of the plume may also intercept a small section of Noyes Slough.

There is no evidence that the Bentley Family Charitable Trust caused the contamination. As the current landowner, however, the trust was responsible under Alaska statutes for cleanup. Union Bank of California, as Co-Trustee, has worked diligently with DEC in meeting their legal responsibilities. Portions of former Tax Lot 201 have been purchased and developed by several large stores - Home Depot, Wal-Mart, and Fred Meyer - and the responsibility for cleanup has at times shifted to the new landowners. Cleanup decisions have been made in a way which meets state standards and at the same time allows for redevelopment of the land.

Chlorinated solvents and petroleum products have contaminated the soil and groundwater. Analyses of groundwater and soil samples taken since 2001 have indicated that trichloroethylene – or TCE - contamination may have resulted from several sources, but the major release location as the former Double Jointing Building on former Tax Lot 201. A contaminated groundwater plume containing TCE and its breakdown product (dichloroethylene, or DCE) extends off-site beyond Anna Avenue to the west-northwest and west of Harriet Avenue, and south of College Road to the Palace Circle and Princess Drive areas. Occupied properties in these areas are supplied with safe drinking water by a public water utility, so there is no need to consume groundwater from private wells.

Two private residential wells used for gardening purposes (i.e., irrigation) were sampled in the fall of 2002 and found to have TCE levels above the safe drinking water levels. The well owners were advised not to use the wells for drinking water. As a precaution to prevent the spread of contamination, DEC request that the public cease the use private well water that contains TCE at concentrations above the groundwater cleanup level (2.8 µg/L), unless the water is properly treated prior to use and discharge.

The following link to the Agency for Toxic Substances and Disease Registry provides more information on the health effects from exposure to TCE: ATSDR Fact Sheet Trichloroethylene 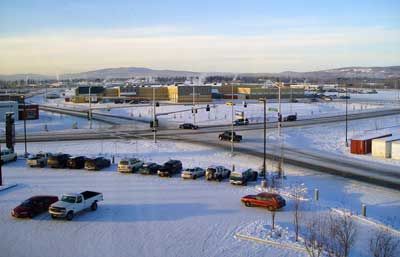 As contamination issues have been resolved, portions of Tax Lot 201 have been sold to a number of commercial establishments, such as Wal-Mart, seen beyond the intersection here. Other businesses are Home Depot, Fred Meyer, Lowe's, Chili's, a mall, several banks, (DEC photo, 2006)

Northeast portion: In the 1970s, this was the site of a facility operated by a pipeline contractor, Surfcote (see picture at the bottom of the page). The remediation of soil and groundwater at took place largely before construction of a Wal-Mart store. An Air Sparging (AS)/Soil Vapor extraction (SVE) system was installed and run from late fall of 2002 until May of 2003. When Wal-Mart took possession of the property, the system and associated monitoring wells were removed for construction. DEC worked with Wal-Mart’s environmental contractor to develop a pre-approved plan that would handle any unexpected environmental problems during construction, helping minimize construction delays during the short Fairbanks construction season. Wal-Mart performed follow-up sampling to verify that cleanup was complete.

Southeast portion: Fred Meyer bought and developed this area. Historically the area has seen limited use, and environmental soil samples did not detect any soil contamination. DEC worked with the company’s environmental contractor to develop a pre-approved environmental plan for the construction phase.

Western portion: Wide-spread groundwater contamination on the western portion of former Tax Lot 201 was identified and interim corrective action begun in 2003-2004. The chlorinated solvent TCE was delineated at the source area – the site of former Double Jointing & Coating facilities – with a combination of soil gas, soil borings and groundwater samples. An AS/SVE system was installed in November 2003 in the source area, and operated until September 2005. (See below for "Citizen's Guide to Soil Vapor Extraction and Air Sparging.")

The TCE (and its breakdown product, dichloroethylene, or DCE) groundwater plume extends to a monitoring well on Antoinette Avenue. The concentration of TCE at this location has typically been above the safe drinking water standard of 5 micrograms per liter (μg/L) and may be influenced by an off-site source area. Also detected at this monitoring well was the chlorinated solvent tetrachloroethene (PCE), a common dry cleaning chemical. There may be a yet undiscovered PCE source area not associated with the former TL-201. If so, some or all of the TCE detected in this well may come from the unknown source area, since TCE is a natural degradation product of PCE.

With the consent of the former Bentley Trust, Alyeska Pipeline Service Company began direct participation in the cleanup process in 2004, with the collection of data to evaluate any risk posed by the contamination to human health and/or animals and plants. The human health and screening ecological risk assessment included the western portion of former Tax Lot 201, the southwestern portion of former Tax Lot 203, and the Lemeta and Palace Court Subdivision areas, including a portion of Noyes Slough.

After considering the risk assessment, DEC determined that contamination on former Tax Lots 201 and 203 were adequately described and documented, and that the risks to human health or the environment are extremely low. Based on this determination, a Record of Decision was established in 2006-7, where additional active remediation at this site was not required by ADEC, and monitored natural attenuation (periodic sampling to track the natural breakdown of contaminants) was the approved treatment methodology to address the remaining groundwater contamination. This decision was subject to several conditions, including:

The frequency of groundwater monitoring is subject change (either increase or decrease) as additional data is collected. Typically it takes multiple sampling events over several years before concentration trends become evident and predictable. The groundwater will be monitored until it attains drinking water standards.

Due to increased concerns of the vapor intrusion exposure pathway over large, dilute groundwater plumes, as well as new of TCE toxicity, DEC re-opened this site in 2015 to evaluate exposure assumptions in the 2006 Risk Assessment, and to evaluate vapor intrusion risks. Since re-opening the site, addition investigations have included an assessment of contaminant soil vapors in down-gradient portions of the groundwater plume (involving indoor air sampling in private homes and buildings) in the Royal Court Village and Lametta subdivisions during 2017-2018. Access was granted for seven individual properties that had a crawl space or basement foundation. A building survey was conducted and two indoor air sampling events occurred in each building. Results showed that TCE and other compounds were either not detected, or detected below DEC commercial or residential target levels, or not attributed to vapor intrusion. Together, the data indicate that there was no unacceptable risk from vapor intrusion occurring.

TCE concentrations in groundwater have shown a decreasing trend, which suggests a mature, slowly attenuating plume. Groundwater monitoring and evaluation of monitored natural attenuation will continue for the contaminated groundwater plume.

Additional vapor intrusion is underway at the original source areas where contaminants were released (the site of former Double Jointing & Coating facilities), at the location now occupied by the former Sports Authority building. Indoor air sampling in February and April of 2019 indicated TCE above DEC target levels, although the building is currently unoccupied. Additional investigation is planned to understand if vapor intrusion occurs and can be mitigated by operation of the building’s air handling system.

ADEC will continue to coordinate investigative efforts with the various responsible parties (RPs) in the area to determine if they are contributing to the area-wide groundwater contamination. 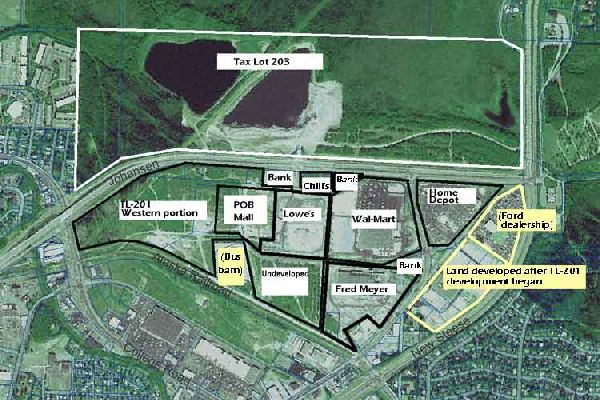 Tax Lot 201, with its various owners, is shown here in 2006 within the black boundaries. It is approximately 154 acres in size and located between the Johansen Expressway (middle of photo), the Old Steese Highway, and the Alaska Railroad right-of-way. The white boundaries depict the approximate edges of Tax Lot 203, with ponds visible near its center. Areas marked in yellow are not part of either tax lot. (Fairbanks North Star Borough aerial photo, with DEC notations.)

Historical background information can be found in the fact sheet and the 2007 Record of Decision, found in the links below.

This panoramic composite photo shows the the empty Tax Lot 201,looking west and southwest. Groundwater has carried TCE contamination to this area, proposed for development. Restrictions on the use of groundwater will prevent users of any development from exposure to this contamination. The area will have city water available. (DEC photo 2006.) 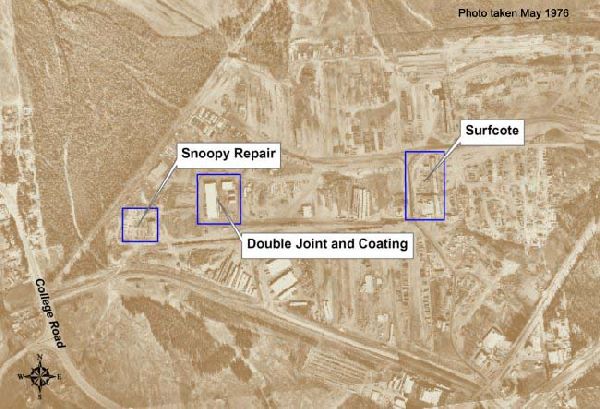 Three pipeline-era businesses, shown here in operation in 1976, were sources of various kinds of contamination. 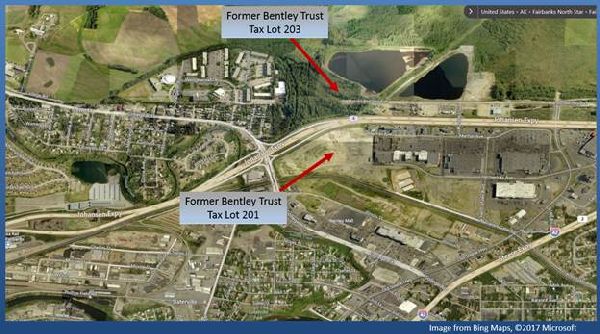 Locations of former tax lots in relation to ongoing development. 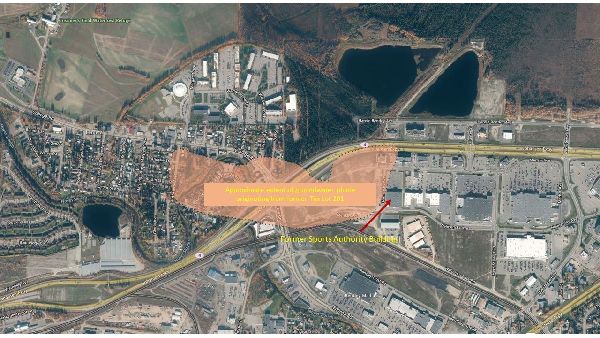 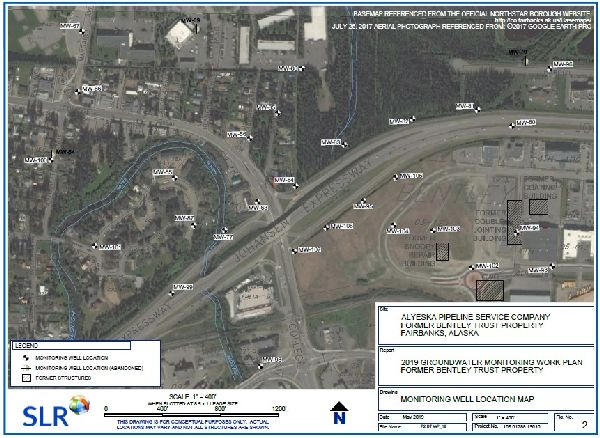 2019 Groundwater Monitoring locations within the plume.