The Alaska Department of Environmental Conservation (ADEC) is providing preliminary drafts of the following documents for public discussion. Please note the Preliminary Draft Step in the simplified State Implementation Plan (SIP) development and opportunities for public input below. These documents are a work in progress. DEC hopes to receive additional information from the public due to the release of the preliminary draft documents and expects to make changes to documents based upon this input. It is likely that the version of these documents released for formal public comment as part of the draft Serious SIP will have changes. 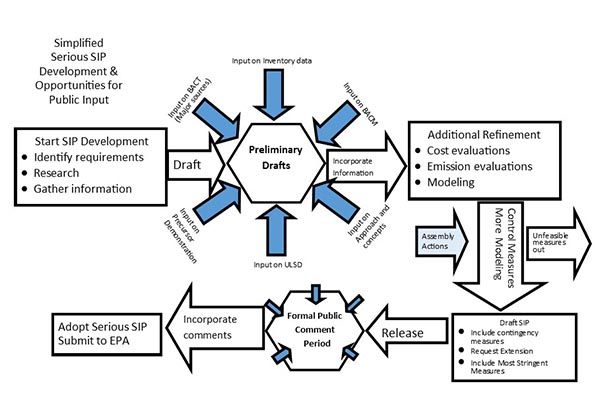 How We Got Here (PDF)

These documents, once finalized, will be used to produce the SIP for the Fairbanks North Star Borough (FNSB) Serious nonattainment area:

The Environmental Protection Agency (EPA) reclassified the Fairbanks North Star Borough nonattainment area as a Serious Area with an effective date of June 9, 2017. Reclassification requires an update to the SIP to meet additional requirements that were triggered upon the reclassification. The preliminary draft documents are based upon information submitted to or obtained by ADEC to date. Some of the documents fulfill explicit EPA requirements for a Serious Area SIP while others are optional supporting materials.

The following overview provides a brief summary of each of the documents, their importance to the Serious SIP, and initial approaches and concepts ADEC is considering.

Final drafts will be released as part of the formal public review process when the full Serious SIP is released later in 2018.

NOTE: DEC does not expect that all of the various ideas and measures presented will be part of the final plan, but it is important to open the dialogue with the full range of options. Also, there is no preliminary information completed yet on: economic analysis of control measures outside what is presented for #5 and #6a, emission benefits for control measures, modeling, or attainment scenarios.

The Draft Concept and Approaches document provides an initial view of how the information included in the various preliminary drafts may be used in the development of the Serious SIP. It provides an overview of how the data could be used over the entire nonattainment area.