The Drinking Water Program engineers review the design, construction, and operation of public water systems to ensure public health is protected. We strive to effectively and efficiently help public water systems in their implementation of regulatory requirements with predictability, thoughtfulness, and clarity, while modifying for site specifics when possible. 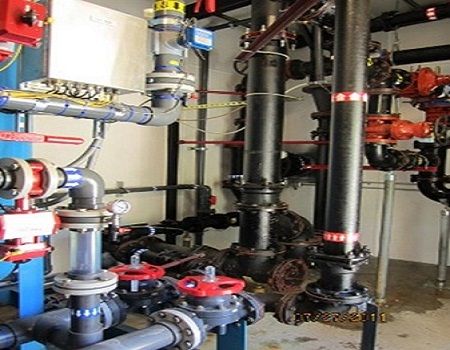 Routine maintenance is defined in 18 AAC 80.1990 (a)(123) as activity normally required to maintain the components of a public water system in good working order; it includes the replacement of a pump, 40 feet or less of pipe, a valve, valve coating, or a hydro-pneumatic tank, or a storage tank. Routine maintenance does not include changes that affect the system's configuration, material, treatment, or capacity. Once the emergency is passed or the routine maintenance is completed, we request that documentation of any changes to the system be submitted for the system’s file.

Do I need to submit for approval to connect a service line to my distribution?
Written approval is not required for a single-service line installation or modification. If a water line is connected to more than one building or a fire hydrant, it is regulated as a water main; this may include lines that some water utilities refer to as services or laterals. In addition, a water line connected to a single fire hydrant will also require engineering plan review. Contact the Drinking Water Program if you are a small public water system planning to add a service connection as it could significantly alter flow and pressure in your system.

Section 1417 of the Safe Drinking Water Act (SDWA) establishes the definition for “lead free” as a weighted average of 0.25% lead calculated across the wetted surfaces of a pipe, pipe fitting, plumbing fitting, and fixture and 0.2% lead for solder and flux. The Act also provides a methodology for calculating the weighted average of wetted surfaces.

In 2009, sulfolane was detected in drinking water wells near the North Pole Refinery, about 15 miles east of Fairbanks. Under DEC oversight, property owner Flint Hills Resources Alaska (FHRA) responded initially by providing affected residents and businesses with alternative drinking water and initiating an extensive characterization effort. The possible effects of long-term exposure to sulfolane through drinking water are not yet fully understood. The City of North Pole is expanding its piped water system to provide sulfolane-free drinking water to impacted residents.

Per- and polyfluoroalkyl substances (PFAS) are a large and complex class of anthropogenic compounds often referred to collectively as PFAS. They are also sometimes referred to as perfluorinated compounds (PFCs). PFAS have been widely used in numerous industrial and residential applications since the 1950’s. In Alaska, spills or releases of PFAS into the environment are primarily associated with the use of aqueous film-forming foams (AFFF) during firefighting or fire training activities. PFAS compounds of most concern where AFFF has been used are perfluorooctanoic acid (PFOA) and perfluorooctane sulfonate (PFOS). These two compounds are the most studied, and in 2016, DEC Contaminated Sites Program promulgated soil and groundwater cleanup levels and EPA issued a lifetime health advisory level for drinking water.

Arsenic is a naturally occurring element found in some groundwater. It is toxic, and it may be colorless, odorless, or tasteless. Some people who drink water containing arsenic in excess of the maximum contaminant level (MCL) over many years could experience adverse health effects such as skin and nerve damage, circulatory problems, and an increased risk of cancer at varying levels of exposure (EPA Factsheet). The Environmental Protection Agency (EPA) has set the MCL for arsenic at 10 parts per billion for public water systems classified as non-transient non-community water systems and community water systems. A water system can reduce arsenic concentrations through several different methods including dilution, oxidation, filtration, ion exchange, and others. EPA’s “Arsenic Treatment Technology Evaluation Handbook for Small Systems” provides additional information on arsenic and design considerations for arsenic treatment.