What is a mixing zone?

1. Practicable: 18 AAC 70.900: (48) "practicable" means available and capable of being done after taking into consideration cost, existing technology, and logistics in light of overall project purposes. 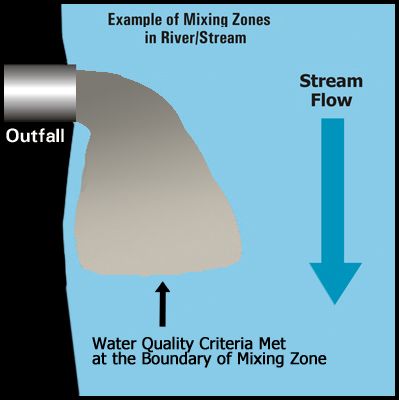 Alaska Water Quality Standards, including mixing zone policies, must be approved by the Environmental Protection Agency (EPA) before they can be used for actions regulated under the federal Clean Water Act (CWA). Discrepancies between state and federally approved mixing zone regulations arise when Alaska adopts a policy and there is a lag time before it is approved by EPA.

Mixing zone regulations for state-authorized permits are referenced in the current version (2012) of Alaska Water Quality Standards at 18 AAC 70.240. The 2009 Mixing Zone Implementation Guidance is applicable for permits authorized by the State of Alaska.

The federally approved state mixing zone regulations are referenced in the 2003 version of Alaska Water Quality Standards at 18 AAC 70.240-270. These regulations are used for Alaska Pollutant Discharge Elimination System (APDES) permits and state certification, under Section 401 of the Clean Water Act, of federally issued permits.

What factors must DEC consider when authorizing a mixing zone in a permit? A partial list of factors includes:

Mixing zones cannot be authorized if the Department determines:

For Federal/EPA Links on Mixing Zones: