According to the Environmental Protection Agency (EPA), Particulate Matter (PM) is a "mixture of extremely small particles and liquid droplets."

Air quality professionals pay attention to particulate matter because these very small particles can cause health problems when inhaled. Specifically, particles less than 10 micrometers in diameter can pass the nose and throat and enter the lungs. A micrometer is one millionth of a meter. 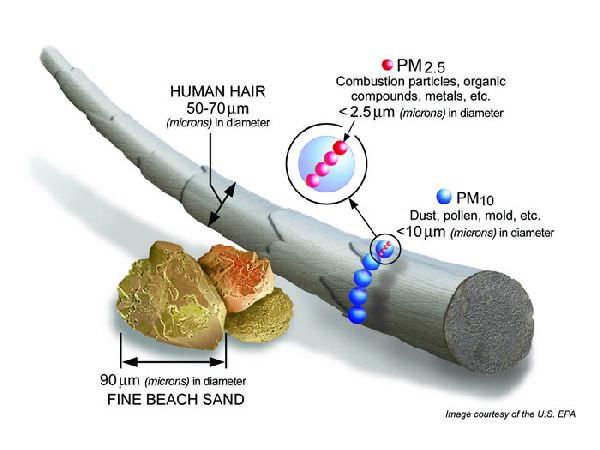 Air pollution standards are given as a mass of material in a volume of air: micrograms per cubic meter (µg/m3). A microgram is one millionth of a gram. A paper clip weighs about a gram. Imagine chopping the paper clip into a million equally sized pieces. One of those pieces would weigh about a microgram. A cubic meter (approximately 39" X 39" X 39") describes a volume of air that is about the size of a washing machine. If you place one of the million pieces of the paper clip in the space occupied by the washing machine, you would have 1 µg/m3.

Dust has long been a problem for rural Alaska. As populations grow and mechanized travel becomes more prevalent, the amount of dust seems to be increasing. Over the past six years, several Alaskan villages initiated PM10 monitoring programs. Since EPA retained the 24 hour PM10 standard, Alaskans have a standard to compare against the monitoring results. It appears a number of villages are in violation of the PM10 standard.

Historically, Eagle River and Juneau have violated Clean Air Act air quality requirements for Particulate Matter (PM10). Neither area continues to violate the PM10 standard. The Department, together with EPA and the City and Borough of Juneau, are currently in the process of changing Juneau's PM10 planning status from "nonattainment" to "maintenance". The draft maintenance documents are available for review:

PM2.5 also is a problem. Until EPA revised the standard, Alaska had been in compliance with the PM2.5 standard. PM2.5 monitoring shows the Fairbanks North Star Borough (FNSB) exceeding the more stringent revised PM2.5 standard; the FNSB will be in "nonattainment." A "Nonattainment Area" is any area that does not meet (or that contributes to ambient air quality in a nearby area that does not meet) the national primary or secondary ambient air quality standard for the pollutant - particulate matter in this instance.

Violations of air quality standards mean the state government and impacted communities must work together to formulate a plan to reduce particulate emissions.

PM10 - The state may recommend EPA designate areas violating the PM10 standard as "nonattainment." If EPA agrees, a process of planning and rule making begins for transportation related problems; these areas gain access to federal highway funds dedicated to air quality improvement. A second option might be for state and impacted communities to sign a "Memorandum of Agreement" with EPA for a pollution reduction plan. A Memorandum Of Agreement (MOA) avoids the stigma of being in "nonattainment" and provides some flexibility and timeliness in formulating a pollutant reduction plan, but does not allow special access to the air quality transportation funds.

PM2.5 - With the new PM2.5 standard, the EPA expects and is looking for states to designate communities in violation of the standard as Nonattainment Areas. The state may recommend designating the Fairbanks North Star Borough as a Nonattainment Area for PM2.5.

What does "nonattainment" status mean?

The state may recommend either a community or a region as a PM nonattainment area. Exactly how the state will group or classify portions of Alaska is still being discussed.

If the state submits an area as "nonattainment" for PM, the EPA has 18 months to approve or disapprove the request. The state begins forming plans to reduce PM levels. This is done in close cooperation with local and regional governments as pollution controls are generally enacted at a local level. If EPA approves the state's request for designating an area as "nonattainment," the state has 18 months to submit an "attainment" plan which includes all the controls and programs agreed to by the state and local governments. Two 18 month periods means it can take 3 years from submittal of the state recommendation to when controls are put into place. The state and local governments then have five years to bring Nonattainment Areas into attainment.