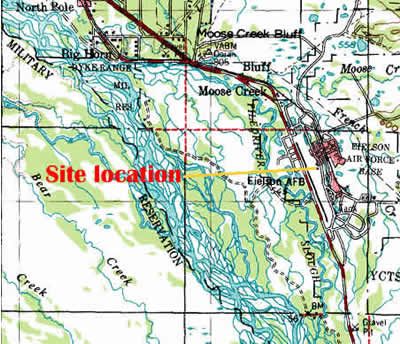 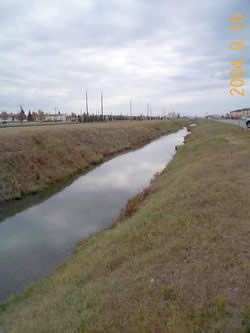 Groundwater has been contaminated with lead, volatile organic compounds (VOCs) such as trichloroethylene (TCE), benzene, tetrachloroethylene (PCE), and per- and polyfluoroalkyl substances (PFAS). Used oils, solvents, fuels, and PFAS-containing substances such as various fire suppression foams have been discharged onto the ground, into surface water, or into the soil. Polychlorinated biphenyls (PCBs) and pesticides have been identified in soils and sediments at Garrison Slough. PFAS compounds have been identified at levels above the Environmental Protection Agency (EPA) lifetime health advisory (LHA) of 70 parts per trillion for the sum of 2 PFAS compounds, perfluorooctane sulfonate (PFOS) and Perfluorooctanoic acid (PFOA). Exceedances of the EPA LHA have been identified in groundwater and in surface waters including Garrison Slough, Polaris Lake, Spruce Lake, Moose Lake, and Bear Lake on base. PFAS contamination in groundwater extends off of Eielson AFB, and into the community of Moose Creek. Surface waters at Moose Creek, northern end of Piledriver Slough, and Cathers Lake exceed the EPA LHA. Fish tissue samples collected from Garrison Slough and Polaris Lake indicated detectable levels of PFAS compounds, and 21 of 23 PFAS compounds were detected. People may be exposed to these pollutants through dermal contact, accidental ingestion of contaminated soil or water, or via fish consumed from contaminated waterbodies.

In July 2020, the Centers for Disease Control and Prevention (CDC), and the Agency for Toxic Substances and Disease Registry (ATSDR) began a PFAS Exposure Assessment for the community of Moose Creek, due to concerns for PFAS in groundwater, and potential human health exposure to PFAS contaminated groundwater being used for drinking water in Moose Creek.

Remediation activities occurred during the 1990's at many of the contaminated sites on Eielson AFB. Petroleum-contaminated soil was excavated and treated by landfarming. Soil caps were installed to prevent human exposure to contamination and limit the transport of contamination. Other sites had active remediation systems installed such as soil vapor extraction, bioventing, and free-product recovery wells.

Records of Decision (ROD) were developed and approved for six operating units (OUs) during the early 1990’s, and many of the potential sites were found not to pose an unacceptable risk to human health and the environment and were closed by EPA and ADEC (the five-year Record of Decision Review for 2003 describing this action is available on the Eielson website). Several sites were given a conditional closure and were placed under institutional controls to prevent people from being exposed to any remaining contamination. As of the 2013 Five Year Review, it was determined that a number of sites had not been adequately characterized or mitigated, though RODs were in place. Subsequently, sites without adequate characterization or mitigation were reopened for additional characterization and evaluation of the remedy in place.

In 2015, the United States Air Force (USAF) initiated a supplemental remedial investigation-risk assessment (RI-RA), and workplans were developed for each of the six OUs to address the need for additional data and/or mitigation. As of 2020, the RI-RA reports are being finalized, and the new information from those reports are being evaluated in feasibility studies to determine appropriate remedies to mitigate risks from identified contamination.

In the spring of 2015, sampling of drinking water supply wells at Eielson Air Force Base revealed the presence of the chemicals perfluorooctanoic acid (PFOA) and perfluorooctanesulfonic acid (PFOS) at levels exceeding the U.S. Environmental Protection Agency's (EPA) Provisional Health Advisory (PHA) level. In 2016, EPA adopted the Lifetime Health Advisory (LHA) for PFOS and PFOA. PFAS compounds are emerging contaminants, or chemicals with limited data on human health effects. They are ingredients found in many waterproofing products, nonstick compounds, and various fire-fighting foams. Contamination from PFAS likely originates from historical fire-fighting foam use at Eielson AFB. Mitigation efforts to date include installing granular activated carbon (GAC) filtration for Eielson AFB’s drinking water wells and on many homes in the Moose Creek community who consented to have such systems installed. Homes in Moose Creek not on a GAC treatment system receive an alternate water supply either via bottled water or water delivery to a holding tank. In June 2019, the USAF, EPA and DEC signed an Interim-ROD for Moose Creek that provides an interim remedy to protect human health by addressing the drinking water exposure pathway. The approved interim remedy is to provide a piped water system from the City of North Pole water treatment plant to the residents within the community of Moose Creek.   As of Fall 2020, upgrades to the City of North Pole water treatment plant have been made to allow for the treatment of the additional volumes of water required. Supply lines have been installed, a storage tank and a Moose Creek pump house have been built, and 80% of the distribution lines have been installed in Moose Creek.

In September 2020, the USAF provided results from sampling completed under the “Expanded Perfluorooctanoic acid (PFOA) and Perfluorooctanesulfonic acid (PFOS) Site Inspection, Uniform Federal Policy- Quality Assurance Project Plan Work Plan, Eielson Air Force Base and Moose Creek, Alaska.” Surface water results for the Eielson lakes, Bear Lake and Moose Lake, were confirmed to be above the EPA LHA. On September 24, 2020, the Alaska Department of Fish and Game issued an Emergency Order restricting Bear and Moose Lakes to catch and release fishing only.

State and federal regulatory agencies continue to work with the USAF to ensure protection of human health and the environment. The USAF’s activities will include assessment, cleanup and mitigation of contamination, as needed.

The “Expanded Perfluorooctanoic acid (PFOA) and Perfluorooctanesulfonic acid (PFOS) Site Inspection, Uniform Federal Policy- Quality Assurance Project Plan Work Plan, Eielson Air Force Base and Moose Creek, Alaska,” was approved by EPA and DEC in September 2019. The inspection is ongoing and has provided information on the extent of PFOS and PFOA in groundwater. The work includes installation of permanent monitoring wells on the PFOS/PFOA plume edge. The known extent of the Eielson and Moose Creek PFOS/PFOA groundwater contamination is depicted on the contaminated sites web map, plume view.

A PFOS/PFOA RI-RA is being developed to further investigate the soil, sediments, groundwater, surface water and pore water throughout the Eielson AFB. Fish and other biota will be sampled during the RI-RA effort. Feasibility studies to evaluate appropriate remedies for the soil source areas on Eielson are expected to be submitted during 2022-2023.

Sites with remedies in place at Eielson AFB that have groundwater contamination are in the sitewide monitoring program to ensure the contaminant plumes are stable or decreasing. Several sites are still being treated by active remediation systems. Institutional controls, such as restriction of groundwater use in certain areas, treatment systems on drinking water wells, fishing advisories, and dig restrictions, are in place at Eielson AFB to prevent exposure to remaining contamination.