Anchorage DEC offices are experiencing a phone and internet outage. Please call the mainline of the Juneau or Fairbanks office location for assistance. Report oil and hazmat spills in the Anchorage area during business hours or statewide after-hours: 907-891-0757. During business hours, spills in Northern or Southeast regions can still be reported to the respective local response team office. 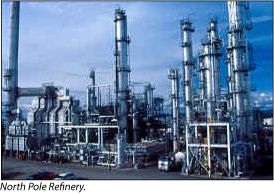 1977
Refinery begins production using crude oil from the Trans-Alaska Pipeline.
1970s to early 1980s
Petroleum product leaks from above-ground storage tanks, consequently these tanks are taken out of service.
1980
MAPCO purchases the refinery.
1985
Sulfolane unit installed.
1986
DEC issues a Compliance Order by Consent, which outlines a cleanup and monitoring strategy for the petroleum contamination.
Mid to late 1980s
Monitoring well data indicates that groundwater on the refinery Is contaminated with petroleum compounds, such as benzene, ethylbenzene, toluene, xylenes, (BTEX) trimethylbenzenes and naphthalene above DEC’s regulatory maximum contaminant levels for drinking water. The drinking water used at the refinery is tested and found to be unaffected, as is the city water system. At this time, the refinery begins treatment and monitoring of the groundwater and performs further site characterization.
1989
The US Environmental Protection Agency (EPA) issues two Resource Conservation and Recovery Act (RCRA) Administrative Orders to MAPCO. The orders outline a cleanup and monitoring strategy for the RCRA hazardous waste violations.
1998
MAPCO merges with The Williams Companies.
2004
The Williams Companies sells the facility to Flint Hills Resources.

View more detailed information on the site history of the North Pole Refinery in DEC's Database of Contaminated Sites.

Sulfolane Use in the U.S. and at the former North Pole Refinery

Sulfolane is an industrial solvent used to extract aromatic compounds from hydrocarbon mixtures and to purify natural gas. It is on the U.S. EPA's High Production Volume Chemical List that indicates the volume of sulfolane either manufactured or imported into the U.S. exceeds one million pounds per year.

There are at least 150 similar extraction units in the U.S. Sulfolane use in North Pole began in 1985. While gasoline was the only product that required the sulfolane extraction process, sulfolane may have migrated into other refinery products due to incidental carryover through the refinery's piping system. Fuels that may have contained sulfolane in the past include #1 fuel oil (jet fuel) and #2 fuel oil (diesel fuel). Only gasoline was monitored for sulfolane content as it was the only fuel produced at the refinery with a sulfolane specification.