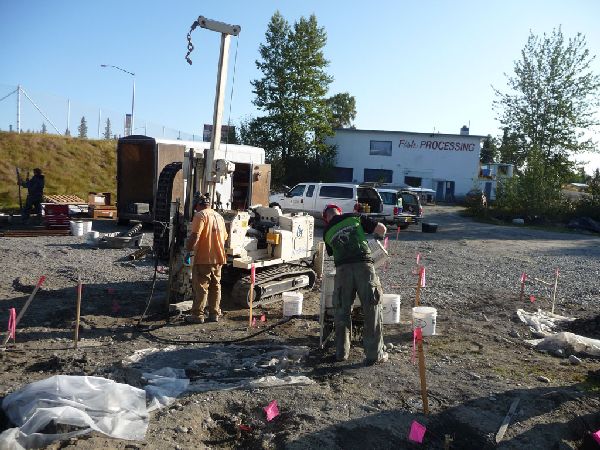 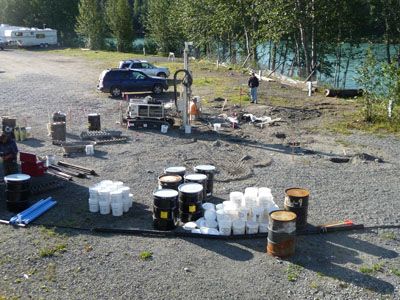 The River Terrace RV Park site is located on the banks of the Kenai River in downtown Soldotna. It operated as a dry cleaning facility from the 1960s to the 1980s and is currently a recreation vehicle parking area.

In 1992, the Alaska Department of Environmental Conservation (DEC) investigated a complaint regarding leaking barrels at the site and discovered 22 barrels containing used oil and other substances. One barrel was labeled “Perchloroethylene,” a dry cleaning solvent also known as PCE. However, the nature and extent of the contamination wasn’t discovered until 1997 – both the soil/sediment and groundwater were contaminated with perchloroethylene (PCE).

During the remediation (or cleanup) process, PCE degrades biologically in a process known as reductive dechlorination where PCE sequentially breaks down into trichloroethene (TCE), then cis-1,2-dichloroethene (DCE), then to vinyl chloride (VC), and finally to ethene, a harmless end product. The amounts of each chemical change as the breakdown occurs, as they have for River Terrace: as the amount of PCE decreased, the amount of TCE went up, and, as TCE went down, the amount of DCE went up, and so forth.

Once the extent and nature of the contamination was discovered in 1997, DEC contractors began soil cleanup activities that fall, and began groundwater cleanup work in the fall of 2000. The goal was to treat the contamination before it migrated into the Kenai River.

Because the contamination is linked to a dry cleaner, the U.S. Environmental Protection Agency, in addition to DEC, has oversight of the site and regulatory authority.

The contamination at the site can be broken down into six parts: (1) the groundwater, (2) the sediment (the soil in the river and on the banks of the river), (3) the pore water in that sediment (the water in the spaces between the soil particles), (4) the surface water in the Kenai River, (5) potential vapor intrusion of contaminant vapors into nearby and future structures, and (6) remaining contaminated soil.

Contractors in 1996 excavated 600 yards of contaminated soil, and in 1997/1998 an additional 2,700 yards of soil. The soil in both excavations represents the major source of the soil contamination that was practical to excavate. The EPA issued a “Contained in” decision in March 2000, which allowed for the on-site management of the contaminated soils without triggering hazardous waste disposal requirements.

The excavated soil was subsequently treated, and was reused on-site in 2003. Some soil underneath the excavation, about 100 feet from the river, still has contamination in deep pockets (30 feet below ground surface) in the lower plume area.

Beginning in 2000, DEC used a treatment technology called Hydrogen Release Compound (HRC) to treat the contamination in the groundwater by enhancing the natural attenuation (the natural breakdown of hazardous substances in the environment). The HRC is injected underground in the area of the groundwater that’s contaminated (see caption for the photos, above).

The HRC was immediately effective in breaking down the PCE, but the degradation process stalled at the DCE stage – the contamination did not degrade further into the nontoxic ethene.

Because the contamination was persistent, DEC in 2002 did a study to see if the stall in the degradation process was caused by a lack of PCE-degrading bacteria or because the degradation process had used up the HRC that had been injected. In the study, DEC set up two test areas. In one area, the contractors added PCE-degrading bacteria; in another area, the contractors used HRC alone. The study results showed that while bioaugmentation (the injection of bacteria) sped up natural attenuation, HRC alone – without bioaugmentation – worked just as well.

That same year, in 2002, additional work in the lower plume area showed that the contamination remaining after the 1997/1998 excavation of 2,700 cubic yards was more extensive than previously thought. Elevated levels of contamination were found in the area of the deepest excavation (around monitoring well No. 44).

Only the former dry cleaner building had indoor air sample results that exceeded screening levels for PCE and its degradation products. While there were exceedances for PCE and TCE in the former dry cleaner building, a 2010 assessment concluded that it’s unlikely that there was a current unacceptable risk to human occupants at that time based on the current use of the building. (For instance, downstairs it’s used only during spring and fall, primarily by occupants of the RV park for laundry/showers. Upstairs, it’s used only during spring and fall as a fish processor, and the front door is open most of the time.) Because soil gas samples exceeded screening levels, the 2010 assessment concluded that there is the potential risk to future structures placed above or near the remaining contaminated areas.

Below is a summary of monitoring results for the whole site:

Groundwater and some soil contaminated with PCE and its breakdown products are the main threat to public health and the environment. The EPA lists PCE as highly toxic and a suspected human carcinogen. Avenues of human exposure have been blocked, so the area of concern is now to help protect the Kenai River from contamination.

In 2018, DEC contractors collected samples from the groundwater monitoring wells in lower and upper plume, and from sentry wells adjacent to the Kenai River. The monitoring data indicate that reductive dechlorination (bioremediation) is occurring in the lower plume and deep till area. Some, rebound, or increasing concentrations, may be occuring for some wells in the upper plume. Based on this monitoring data, sampling of select upper plume wells is planned in 2019 to confirm contaminant concentrations and determine whether further HRC treatment is warranted. Sampling of groundwater monitoring wells near the river, pore water, and surface water samples is planned for October or November 2019. These sampling events will help determine future site activities and monitoring. 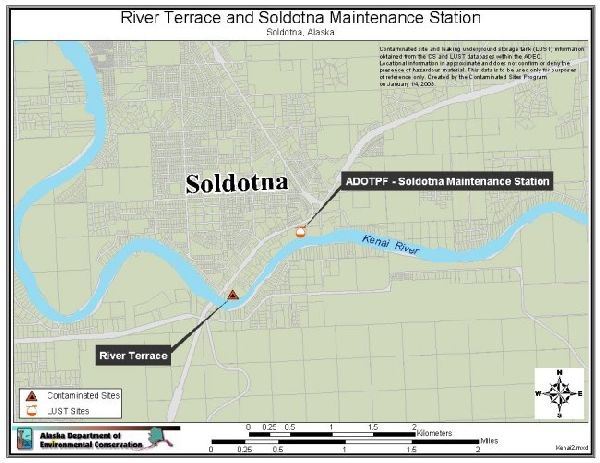 November 2018 Groundwater Monitoring Report prepared by Ahtna Engineering Services, LLC for the Alaska Department of Environmental Conservation. If you would prefer a copy on compact disk, please email the CSP Webmaster.

October 2016 Groundwater Monitoring Report prepared by ERM for the Alaska Department of Environmental Conservation. If you would prefer a copy on compact disk, please email the CSP Webmaster.

April 2014 Groundwater Monitoring Report prepared by ERM for the Alaska Department of Environmental Conservation. If you would prefer a copy on compact disk, please email the CSP Webmaster.

May 2000 Remedial Investigation/Feasiblity Study, prepared by Oasis/Bristol Environmental Services for the Alaska Department of Environmental Conservation. This document is divided into parts to allow for easier downloading. If you would prefer to get a copy on a compact disc, please email the CSP webmaster.

Figures Only (high resolution for printing)