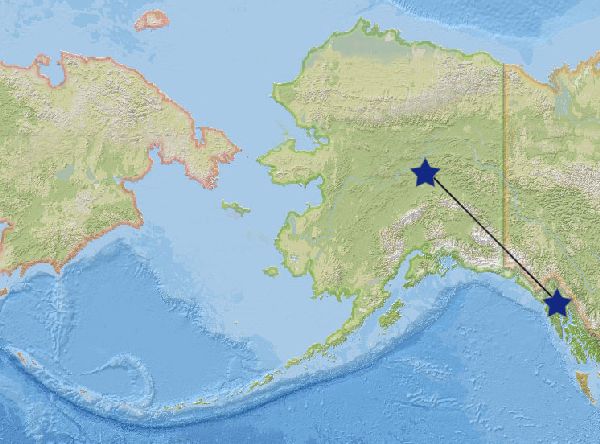 The Army Corps of Engineers is beginning an investigation of old petroleum spills and contamination which took place during the operation of the pipeline. The investigation for the presence of dioxin contamination along the route of the former fuel pipeline has been completed, with no residual herbicides or herbicide-related dioxin detected in any of the samples. Other forms of dioxins were below State cleanup levels at all sampling locations. 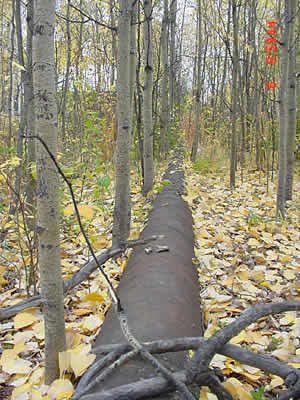 Sampling was completed in October 2003 at selected portions of the right-of way for dioxin or other persistent chemicals possibly remaining from past herbicide use. Samples were taken by the Corps, with oversight by DEC. No residual herbicides or herbicide-related dioxin detected in any of the samples. Other forms of dioxins were below State cleanup levels at all sampling locations. (DEC photo, 9/03)

The Haines-Fairbanks Pipeline was used by the U.S. Army from 1954 to 1973 to transport petroleum products from the deep-water port of Haines to Fort Greely, Eielson Air Force Base, and Fort Wainwright, in Interior Alaska. The eight-inch pipeline extended 626 miles (300 miles in Canada and 326 miles in Alaska) from the Haines Terminal to the Fairbanks Terminal at Fort Wainwright. The pipeline route followed the Haines Highway to Haines Junction, Yukon Territory (Canada), then along the Alaska Highway to Delta Junction and along the Richardson Highway to Fort Wainwright near Fairbanks.

Pumping stations, supporting terminal bulk storage tanks and related facilities in Alaska were located in Haines, Lakeview, Tok, Sears Creek, Big Delta, Timber, Birch Lake, Eielson AFB, and Fort Wainwright. The pipeline right-of-way was generally 25 feet wide on each side of centerline. The pipeline was surface laid in some areas and buried in others. By 1974 the pipeline was no longer in use.

In early 2001, the U.S. Army Corps of Engineers determined that portions of the Haines-Fairbanks pipeline were eligible for investigation and possible cleanup of petroleum contamination by the Formally Used Defense Sites (FUDS) Program. Risk to human health and the environment was considered to be relatively low, and the Corps scheduled the initial preliminary assessment of the right-of-way for 2005. This effort is beginning, with public meetings being held along the pipeline route to discover any information about past spills.

Late in 2002, DEC obtained the report "Without Prejudice: Summary of the Non-Native Activities in the Klukshu Reserve Area and Their Impact on Traditional Life," compiled by Champagne & Aishihik First Nations. This report contained copies of correspondence from the U.S. Army to Canadian officials stating that herbicides were used to defoliate the pipeline right-of-way in Alaska. One of those herbicides, Esteron Brush Killer, was a mixture of 2,4-dichlorophenoxyacetic acid (2,4-D) and 2,4,5-trichlorophenoxyacetic acid (2,4,5-T). A similar mixture was used as a defoliant in Vietnam and known as “Agent Orange.” 2,4,5,-T was found to contain dioxin, and its use has since been banned in the United States. See more information on dioxin below.

Map of the Haines-Fairbanks Pipeline Corridor. 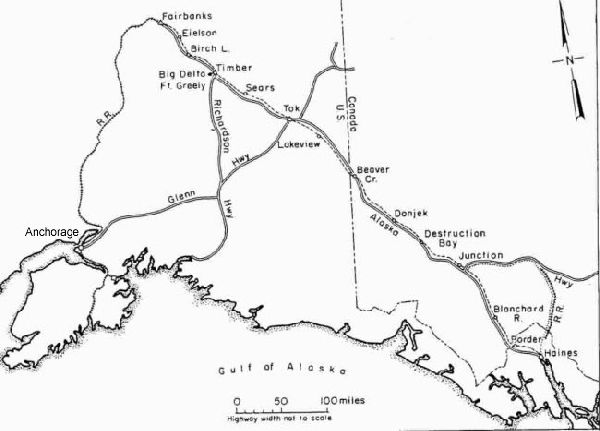 The dotted line represents the pipeline.

Upon learning about the herbicide use, DEC requested that the Corps of Engineers take immediate steps to determine if there is a risk to the public from dioxin or other constituents associated with herbicide use along the pipeline right-of-way. The Corps initiated an archival record search for information on the types of herbicides used, where they would have been used, and how much was used. This record review and interviews with people with historical knowledge, along with meetings with stakeholders, helped shape a sampling plan to evaluate the level of risk to human health and the environment. Public meetings were held in Tok and Fairbanks in June, and in Haines in early September of 2003.

When the Corps' record search turned up little information, DEC also conducted its own records search in an extensive effort to find any paper trail from the ordering, shipment, storage or use of Esteron Brush Killer or other dioxin-contaminated herbicide along the pipeline. This search also turned up very little.

In 2004, the Corps of Engineers began to investigate the potential for the presence of petroleum hydrocarbon contamination along the pipeline. This process will continue for the next several years.

The contaminants of concern are the numerous petroleum constituents of gasoline, and possible dioxin or residual pesticides.

Petroleum spills can cause groundwater contamination and the potential impact to drinking water wells. The main contaminant of concern in petroleum is benzene, a known carcinogen which typically migrates further then other gasoline constituents.

This substance decomposes slowly in the environment and is a suspected carcinogen. Dioxin is a general term used to describe about 75 chemically related compounds. Some of these compounds have been shown to cause cancer in animals and other harmful effects in people. Health effects on people and animals depend on how much dioxin they are exposed to, how it gets into their bodies, and how long they are exposed. The following link to the Agency for Toxic Substances and Disease Registry provides more information on the health effects from exposure to dioxins or chlorinated dibenzo-p-dioxins(CDDs). The investigation of the pipeline in 2003 strove to determine if the use of herbicides resulted in levels of dioxin greater than those expected from these sources.

Results of the joint investigation of dioxin indicated negligible levels of dioxin contamination in the soil. In the joint press release by the U.S. Army Corps of Engineers and DEC, issued January 30, 2004, Army Corps project manager Rich Jackson announced, "Neither residual herbicides, nor herbicide-related dioxin were detected in any of the samples taken.” Dioxins were below State cleanup levels at all sampling locations. Here are specific findings of the report:

Dioxins, or chlorinated dioxins, are a class of 75 chemically related compounds. They are composed of the same number of elements but their structural arrangement is different. Each one of these arrangements is called a "congener."

Dioxins are not intentionally manufactured except for research purposes. They may be formed during bleaching or disinfection processes which use chlorine, such as at pulp and paper mills and waste and drinking water treatment plants. They can occur as contaminants in the manufacture of certain organic chemicals. They are also formed during the burning of household trash, and even vehicle exhaust. The dioxin contamination in 2,4,5-trichlorophenoxyacetic acid (2,4,5-T) component of Agent Orange was created when a certain temperature was reached during manufacture.

The dioxin congener found in herbicides is specific enough to be distinguished during testing from other forms of dioxin found in the environment.

To learn more, download our fact sheet on dioxin (PDF), specific to the Haines Fairbanks Pipeline.

The Corps' report notes that the sampling results do not prove or disprove whether herbicides with dioxin were ever applied along the Alaskan portions of the pipeline, they simply show that no trace of application can currently be detected in the areas sampled.

The results of the pipeline sampling are supported by the findings of research summarized in the report, "Pesticide Residues in Food," issued in 1979 and sponsored by the Food and Agriculture Organization (FAO) of the United Nations Panel of Experts on Pesticide Residues in Food and the Environment, and the World Health Organization (WHO) Expert Group on Pesticide Residues. That research indicated that when 2,4,5-T contaminated with 2,3,7,8-TCDD (dioxin) was applied in prescribed amounts as an herbicide, the dioxin did not persist in the environment.

According to the Corps' report (see below), "Unless additional specific information concerning the application of herbicides along the pipeline corridor comes to light, no further testing for herbicides or herbicide-generated dioxins is recommended; the data simply do not provide a foundation for a more focused investigation" (page 19 of the report). DEC also agreed with this conclusion.

Since no harmful levels of petroleum, dioxin or herbicide residue contamination have been found along the right-of-way, the pipeline is not listed on the Contaminated Sites Database.

In November 2004, the Corps of Engineers held a public meeting in Haines and also met with the Chilkoot Indian Association and the Chilkat Indian Village to gather information and local knowledge concerning past petroleum releases along the pipeline. Local residents provided valuable information regarding spills and leaks during pipeline operations as well as areas where contaminated soil was encountered while doing earthwork activities along the pipeline. Based upon this information, the Corps of Engineers is developing a sampling plan to be implemented in Fall 2005.

For the pipeline portion from Beaver Creek to Fairbanks, the Corps of Engineers hopes to hold public meetings at a number of villages along the pipeline in order to learn about past petroleum releases in 2005. Getting information from local residents is the critical first piece in determining appropriate locations to collect samples. Following these meetings, the Corps of Engineers will identify the suspected areas of contamination, obtain permission from the landowner to enter and collect samples, and then sample the property.